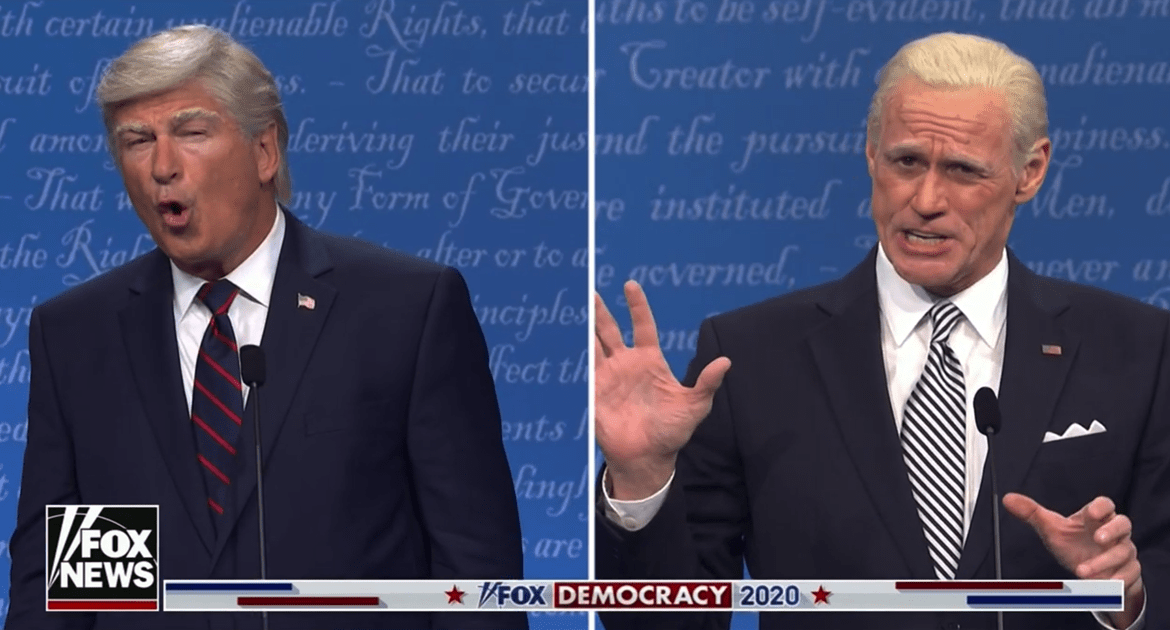 “Saturday Night Live” kicked off its 46th season by facing leadership turmoil set off when President Donald Trump announced that he has Covid-19.

Fox News’ Chris Wallace (Beck Bennett) starts the contest by saying, “I think I’m going to do a really really good job tonight.” Wallace was criticized for how he handled the real debate.

Biden steps on stage and immediately produces a tape measure to check the distance between lecterns before moving his just a little farther.

When it’s Trump’s turn, he says, “I’d like to begin with a list of complaints. People are mean to me.” He then says the coronavirus is a “hoax.”

“That statement is something that will probably come back to haunt me this week,” Trump says.

The president claims he’s a champion of law and order — “no exceptions.”

“Okay,” Wallace asks. “What about your taxes?”

“There have to be exceptions, Chris,” Trump says.

After Trump continues to interrupt the proceedings, Biden zaps him with a remote control that pauses the president mid-sentence.

“America, look at me,” Carrey’s Biden says. “Look directly into my eyeballs. You can trust me because I believe in science. And karma.”

“Now just imagine science and karma could somehow team up to send us all a message about how dangerous this virus can be,” he continues. “I’m not saying I want it to happen. Just imagine it.”

Comedian Chris Rock hosted the show, which was produced with social distancing and mask-wearing behind the scenes. The audience capacity was limited, and fans were tested for Covid-19.

Rock said in his monologue that as a result of the show’s testing protocol, he’s had “more things” up his nose this week than when he shared a dressing room with the late cast member Chris Farley in the 1990s.

“President Trump’s in the hospital from Covid, and I just want to say my heart goes out to Covid,” Rock said.

The comedian critiqued the American political system, saying locking in a leader for four years is not ideal.

“What job do you have for four years no matter what?” he says. “If you hired a cook and he’s making people vomit everyday, do you sit there and go, well he’s got a four-year deal?”

Musical guest Megan Thee Stallion had some political criticism to dish, aiming a message at Kentucky Attorney General Daniel Cameron, who presented a case in the fatal shooting of Breonna Taylor to a grand jury that returned with no charges directly related to her death.

Messages displayed on-stage behind the hit-making rapper compared Cameron to Black Americans who helped sustain slavery. “Daniel Cameron is no different,” one of the statements read.

Co-host Colin Jost said Friday’s images of the president leaving the White House on Marine One conjured the Fall of Saigon in 1975.

“It looked like the last chopper out of Vietnam,” he said.

Colleague Michael Che pushed back against those who have said it’s not the time to make fun of the president because Covid-19 can be so deadly.

“There’s a lot funny about this,” he said. “Maybe not from a moral standpoint, but mathematically if you were constructing a joke, this is all the ingredients you need.”

“I don’t want Trump to die, obviously,” Che said. “I wish him a very lengthy recovery.”

The segment closed with a brief tribute to late Supreme Court Justice Ruth Bader Ginsburg, celebrated on SNL with portrayals by Kate McKinnon.

The cast member was in the audience in a judicial robe, hand-on-heart. A message flashed on-screen: “Rest in power.”

Dennis Romero writes for NBC News and is based in Los Angeles.

Don't Miss it Coronavirus Australia: Sunday night update
Up Next Trump says he is doing well, but next couple of days the 'real test' – BBC News