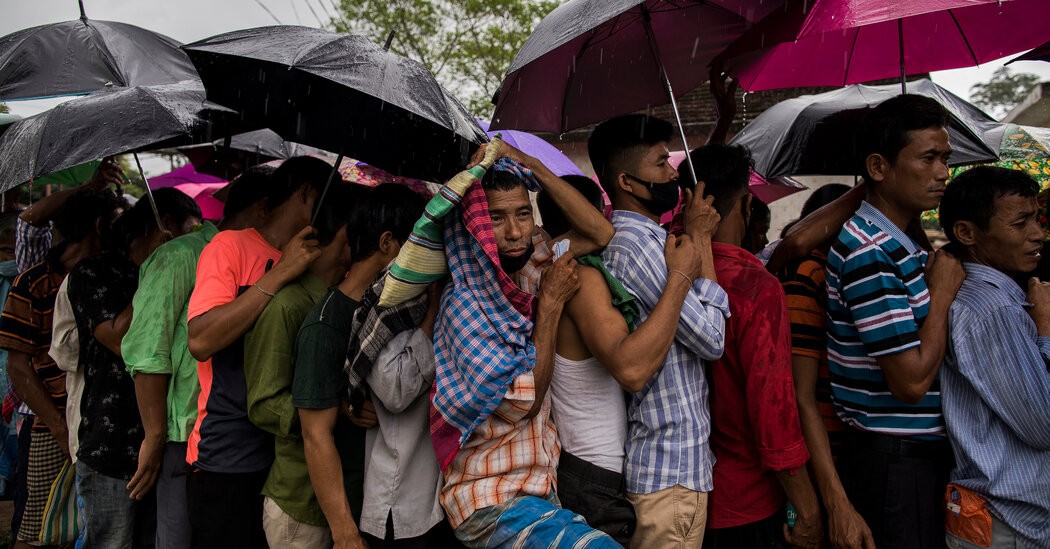 MASLI, India — Sliding out of their rickshaw, masks on, fresh sanitizer smeared across their hands, a team of health workers approached one of the mud-walled homes in Masli, a remote village in northeast India surrounded by miles of mountainous rainforest.

“Are you Amit Deb?” they asked a lean, shirtless man standing in his yard. Mr. Deb nodded cautiously. Five days earlier, he had tested positive for the coronavirus. Now his family members needed to be tested.

“We can’t afford to quarantine,” explained Mr. Deb, a shopkeeper. If anyone else in his family was found positive, they would all be ordered to stay inside, which would mean even more weeks of not working, which would push the family closer to running out of food.

The medical team moved on to the next house. But they kept meeting more refusals.

The defiance of the coronavirus rules is being reflected across rural India, and it is propelling this nation’s virus caseload toward the No. 1 spot globally. Infections are rippling into every corner of this country of 1.3 billion people. The Indian news media is calling it “The Rural Surge.”

In the Indian megacities where the pandemic first hit, vigorous public awareness campaigns have left the populace mostly on guard. But when it comes to government efforts to contain the virus, rural India is resisting.

In many villages, no one is wearing masks. There is no social distancing. People are refusing to get tested and they are hiding their sick.

Hospitals are straining; in the coronavirus ward of one hospital here in the state of Tripura, insects were left to crawl over corpses, according to photos from a former government official.

In recent trips to more than a dozen rural areas spread across several states, from Tamil Nadu in the south to West Bengal in the far west, to Tripura, Bihar and Uttar Pradesh in the north, the reaction to the pandemic appeared to be completely different from that of the big cities like Delhi and Mumbai.

Out in the rural areas, many people behave as if there is no coronavirus. Even many police officers who have been empowered to enforce the pandemic rules are not wearing masks.

This intransigence has helped India catch up with the United States in terms of total infections. U.S. cases are near 7.6 million, compared with India’s 6.8 million, according to a New York Times database. But India outpaces new American cases by 30,000 or so each day, putting it on a path to potentially surpass the United States in the coming weeks.

Many people in Indian villages believe their government is overstating the severity of the pandemic and showing no sensitivity to the economic hardship that they are suffering.

Government officials have tried to reassure them that they are containing the virus while striking the best possible balance between protecting lives and livelihoods.

The officials say India’s caseload is rising because nearly one million tests are being performed each day, five times the number a few months ago. They also point to India’s relatively low death rate, about an eighth or ninth of those of the United States, Spain, Brazil and Britain.

Scientists say this is mainly because India’s population is younger and leaner, though they caution that most deaths in India, from any cause, are not investigated. And India’s deaths are steadily ticking up, by about 1,000 a day, now totaling about 105,000.

Prime Minister Narendra Modi has “spoken on all available platforms and underlined the need and importance of wearing masks and maintaining physical distancing,” said Manisha Verma, a spokeswoman for India’s health ministry. The government’s focus, she said, has been on changing behavior rather than enforcement.

In fact, even as the coronavirus spreads through the rural regions, other parts of India are loosening containment restrictions to help the stricken economy. This month, the central government is allowing movie theaters to open. Schools can soon reopen if state governments agree.

Mr. Modi locked down the country this spring, with four hours’ notice, to buy time for India to scale up its production of masks and other protective equipment and to open treatment centers. But the severe lockdown spawned an exodus of millions of migrant laborers who could not afford to stay in urban areas. Their movement to rural communities helped spread the virus to nearly every corner of India.

“We are still in the first wave,” said Rajib Acharya, a New Delhi-based research associate at the Population Council, a nonprofit that works on health and development issues.

“I don’t see any new strategy for the rural areas,” he added.

Rural areas are not well positioned to cope. Nearly two-thirds of all hospital beds in the country are in urban areas, which are home to only one-third of the population.

Hospitals around the country are struggling to provide enough oxygen for the rising number of patients. Many people, both in cities and in the countryside, have struggled to find beds for sick family members.

“Families in India are living in fear, grief, sadness, depression, anxiety and food insecurity, delaying their care from other health conditions,” said Bhramar Mukherjee, an epidemiologist at the University of Michigan. “It is a tragic time.”

She attributed the spread of the virus to “habituation, desensitization, fatalism, fatigue, denial.”

The remote northeastern state of Tripura, heavily forested and largely rural, is a case study in the virus’s spread. Before mid-June, the state of about four million people had reported a total of fewer than 1,000 infections. Now, the total is 27,545, according to state data. Many experts believe that is a fraction of the true number. The state’s death rate is also steadily increasing, from its first reported death in June to more than 300 deaths now.

In Tripura’s small towns and villages, many people are scared to get tested because of the social stigma. Neighbors shout at people believed to be positive to stay indoors and to not even look out the window.

During a walk through one neighborhood near Chawmanu, where many of the indigenous Tripuri people grow rice, tea and vegetables for a living, villagers pointed toward a small house with a rusty tin roof. One person inside was sick, they said.

Aparna Saha, a woman with a penetrating gaze, opened the door. She acknowledged that her 72-year-old father had tested positive and had breathing problems.

But, she was quick to add, in a shrill voice, “He’s absolutely fine.”

A few days earlier, health workers had arrived to take Ms. Saha’s father to a coronavirus facility in a neighboring town. Ms. Saha blocked them.

Even the families that have followed the rules and taken loved ones to hospitals say the experience was horrifying.

On a muggy September evening, Rupam Bhattacharyajee broke down outside the Govind Ballabh Pant Hospital, Tripura’s only critical care health facility, in the state capital of Agartala.

Mr. Bhattacharyajee’s elderly father was inside, sprawled on a mattress on the floor — there were no spare beds — fighting for his life.

A local court is investigating Tripura’s pandemic response, following news reports about conditions at the hospital. A photograph believed to have been taken recently in the hospital’s coronavirus care center, which was shared with The New York Times by Sudip Roy Barman, a former state health minister, showed a dead body with insects crawling on it.

After seeing the conditions inside the hospital, Mr. Bhattacharyajee brought his father back home. He paid more than $200 for a private ambulance and made the bumpy six-hour journey sitting in the back, swapping out oxygen cylinders continuously to keep his father breathing.

Mr. Bhattacharyajee said that his recovering father is lucky to be alive.

“People are dying, one after another,” Mr. Bhattacharyajee said. “Nobody cares.”