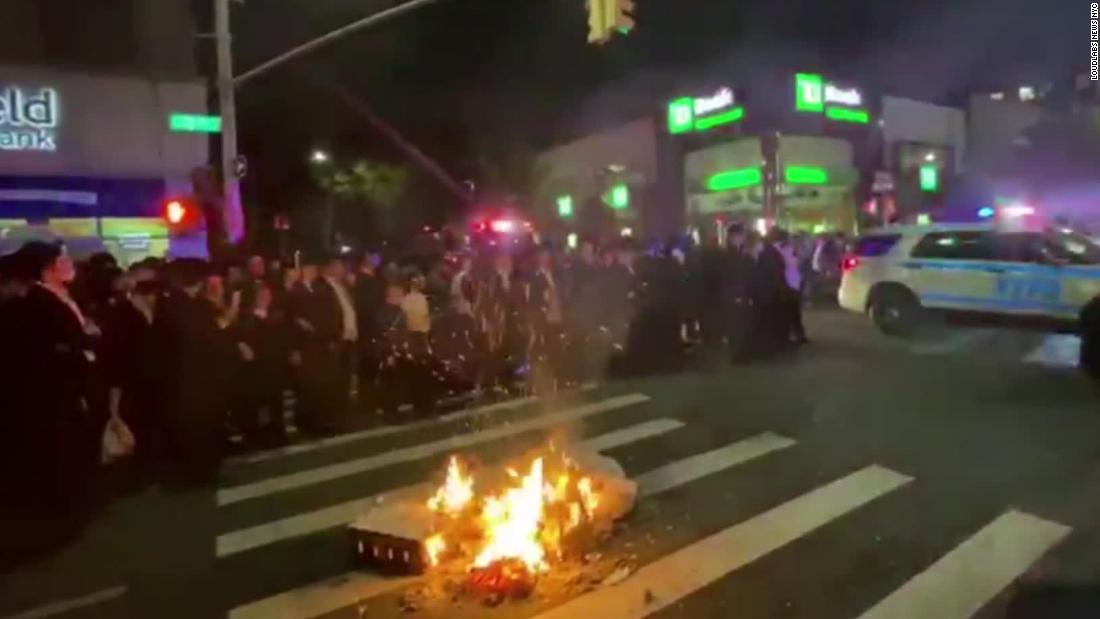 Video of the protests shows a large group of people wearing traditional black hats and long suits — few of whom are wearing masks — surrounding what appears to be a rubbish fire in the street. It is not clear how the fire began.

At one point, when individuals in “Sheriffs” jackets are present on the scene, the crowd can be heard chanting “go” and “sheriffs go home.” When the Fire Department arrived, a crowd approaches the truck, with some chanting for the authorities to leave. The video captures NYPD also arriving to the scene.

Two deputies from the New York City Sheriff’s office showed “incredible restraint and professionalism under menacing circumstances” after responding to a protest and fire early Wednesday morning involving members of the Orthodox Jewish community, according to a tweet from the sheriff.The two deputies arrived on the scene in Brooklyn in an unmarked vehicle and saw a large crowd of people who weren’t social distancing, many not wearing masks, start a fire in the street, according to the tweet. When members of the Fire Department of New York arrived, the crowd surrounded their fire engine and they were unable to put out the fire.

“The FDNY unit received permission to withdraw from scene due to safety concerns, and deputies remained on site until their withdrawal. Upon returning to their vehicle, the deputy sheriffs observed a person being harassed and surrounded by a large crowd. Deputies took that person into protective custody, placed him in sheriff vehicle for safe keeping, and drove him away from the crowd.”

The incident occurred at 13th Ave between 44th and 51st Street in Brooklyn.

“The Sheriff’s Office believes the two deputy sheriffs displayed incredible restraint and professionalism under menacing circumstances by concentrating on the safety of the firefighters who were doing their job and the well-being of the member of the public surrounded by a crowd for simply being present on the street.”

The restrictions came amid clusters of Covid-19 cases in parts of Brooklyn, Queens and outlying NYC suburbs of Rockland and Orange counties. The clusters are in areas with large Orthodox Jewish populations, and Cuomo has blamed the outbreaks in part on a lack of mask-wearing in the community.

The clusters of cases have alarmed officials in the city, which just reopened schools for in-person classes last week. Further spread of Covid-19 in these neighborhoods and elsewhere could jeopardize that reopening for the entire city.

To stop the spread, the state deemed these clusters “red zones” and ordered them to close schools and most non-essential businesses, limit houses of worship to 10 people, and prohibit mass gatherings, the governor said. Surrounding areas, deemed “orange zones,” were forced to close schools as well, while “yellow zones” had slightly less strict restrictions.

Cuomo said he spoke with members of the Orthodox Jewish community on Tuesday and asked for their cooperation in these actions. “That was positively received,” he said.

But in a joint statement, four local politicians said they were “appalled” by Cuomo’s words and actions and said that he had misled them.

State Sen. Simcha Felder, state Assemb. Simcha Eichenstein and NYC council members Kalman Yeger and Chaim Deutsch argued that the restrictions were “scientifically and constitutionally questionable,” that they had not been included in these decisions, and that their religion was being targeted for an outbreak.

“Governor Cuomo’s choice to single out a particular religious group, complete with a slideshow of photos to highlight his point, was outrageous. His language was dangerous and divisive, and left the implication that Orthodox Jews alone are responsible for rising Covid cases in New York state,” they said. “This implication is not born out by the state’s own data.”

Dr. Dave Chokshi, the NYC Commissioner of the Department of Health, said the state restrictions were put in place based on rising Covid-19 cases and rising test positivity rate in these areas.

New York Mayor Bill de Blasio said the restrictions were not targeting a specific demographic group and noted that these neighborhoods were some of the most diverse in the world.

“This is about protecting everyone’s lives. This is about all New Yorkers,” de Blasio said. “Within these areas are many kinds of people.”

The mayor said people have a right to protest but must do so peacefully.

“NYPD will not tolerate people doing harm to others. No tolerance to assaults, damage to property, to setting fires. Anything like that is unacceptable,” he said.

He warned that those violating rules on mass gatherings could be fined up to $15,000 a day. The fines for not wearing face coverings or maintaining social distancing can be $1,000 a day, he said.

“We want to be respectful but I want to be very clear, when the NYPD issues an instruction … people must follow the instruction,” he said.

Gov. Cuomo said in his briefing Wednesday that the new rules are difficult.

“It’s been a little bit ugly all through this,” Cuomo said. “These are difficult rules. This is a dramatic shift for society. It always has been.”