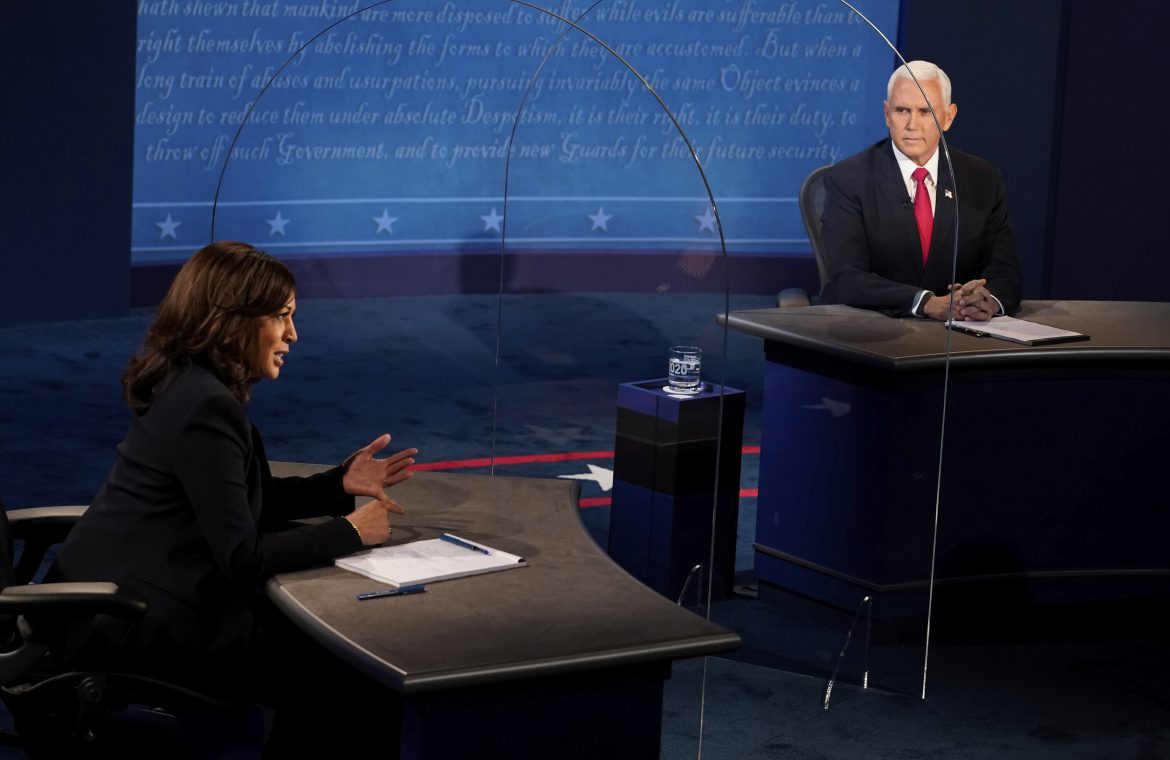 Democratic vice presidential nominee Kamala Harris and Vice President Mike Pence did not waste time trading fire over President Trump’s handling of the coronavirus pandemic, the idea of packing the Supreme Court and taxes as they faced off Wednesday in their first and only debate during the general election.

The two nominees were significantly more cordial than Trump and Democratic nominee Joe Biden were to each other in their first presidential debate, though they clashed several times throughout the night when Pence spoke over Harris. “Mr. Vice President, I’m speaking. I’m speaking,” Harris said at one point during a discussion on taxes. Pence then shot back: “It’d be important if you said the truth.”

During a spirited opening, Harris and Pence sparred over how the Trump administration has performed during the pandemic. Pointing to a national death toll from the virus that’s surpassed 210,000 — with more than 7.5 million confirmed cases — the Democratic senator from California charged that “the American people have witnessed what is the greatest failure of any presidential administration in the history of our country.”

Over the past seven months, Democratic presidential nominee Joe Biden has repeatedly criticized the president — charging Trump initially downplayed the severity of the outbreak — and claiming he botched the federal government’s response.

She argued that “this administration has forfeited their right to re-election based on this” and argued that “they still don’t have a plan and Joe Biden does.”

Pence, defending the administration, emphasized that “from the very first day, President Donald Trump’s has put the health of the American people first.”

Touting the president’s curtailing of nearly all airline flights incoming from China, where the pandemic originated, Pence said “that decision along by President Trump bought us invaluable time to stand up the greatest national mobilization since World War Two and I believe it saved hundreds of thousands of American lives.”

The vice president, who leads the White House coronavirus task force, also took aim at Biden’s coronavirus plan, saying “it reads an awful lot like what President Trump and I and our task force has been doing every step of the way.”

“It looks a little bit like plagiarism, which is something Joe Biden knows a little bit about,” Pence added, referring to the infamous Biden plagiarism controversy from his first White House run in 1988.

Harris shot back, saying “whatever the vice president’s claiming the administration has done, clearly it hasn’t worked When you’re looking at over 210,00 dead bodies in our country, American lives that have been lost, families that are grieving that loss.”

Responding, Pence said “there’s not a day gone by that I haven’t thought of every American family that’s lost a loved one.”

The debate – the first since the president contracted COVID-19 — comes as Trump’s sidelined from the campaign, huddling in the White House after being hospitalized for three days at Walter Reed National Military Medical Center as he recovers from the coronavirus.

Harris and Pence sat at desks on the stage – separated not only by 12 feet but also by plexiglass – to try to minimize any potential airborne transmission of the virus. Pence and his team initially objected to the barriers, but relented hours before the debate.

Pence, defending the president’s decision not to push for a national mask mandate, said “President Trump and I trust the American people to make choices in the best interests of their health and Joe Biden and Kamala Harris consistently talk about mandates.”

Harris, firing back, said “you respect the American people when you tell them the truth.”

And she charged the administration was standing on information and “was unwilling to speak the truth to the American people.”

The pandemic has been the leading issue in the presidential race since the outbreak swept the nation in February and March. And with the president’s COVID diagnosis, the issue – as expected – dominated the start of the debate.

Harris was in the spotlight last month when she said she wouldn’t trust Trump when it comes to a coronavirus vaccine after charging he had severely politicized the quest for a vaccine. Asked by moderator Susan Page of USA Today if she’d take a vaccine approved by the administration, the senator said “if the public health professionals, if Dr. Fauci, if the doctors tell us to take it, I’ll be the first in line to take it. Absolutely. But if Donald Trump tells us that we should take it, I’m not taking it.”

Pence, responding, stressed that the “reality is that we’re going to have a vaccine.. in record time.”

He then argued that “the fact that you continue to undermine public confidence in a vaccine if the vaccine emerges during the Trump administration, I think is unconscionable. Senator, I just ask you, stop playing politics with people’s lives.”

The president has nominated Amy Coney Barrett to the Supreme Court to fill the seat vacated by the death of Justice Ruth Bader Ginsburg. The conservative Barrett, 48, currently serves as a judge on the 7th Circuit U.S. Court of Appeals.

The passing of the 87-year old liberal justice — who was a trailblazer and a strong advocate for gender equality and civil rights — has sparked a fierce partisan fight. Trump and Senate Republicans are moving quickly – with the election less than six weeks away – to confirm Barrett and tilt the high court ideologically further to the right.

Pence and Harris sparred over how some of Barrett’s religious views will be central to the confirmation debate. That debate kicks off next week in the Senate Judiciary Committee, where Harris is one of the Democratic members.

“We particularly hope we don’t see the kind of attacks on her Christian faith that we saw before,” Pence said as he pointed to criticism by some Senate Democrats over Barrett’s associated with a Christian group named People of Praise

Harris pushed back, stressing “Joe Biden and I are both people of faith. And it’s insulting to suggest that we would knock anyone for their faith… and in fact, Joe, if elected, will be only the second practicing Catholic as president of the United States.”

Pence then questioned whether a Biden administration would push to add seats to the Supreme Court if Republicans successfully push through the Barrett confirmation ahead of the election.

“This is a classic case of, if you can’t win by the rules, you’re going to change the rules,” Pence said. He then turned to his opponent and asked Harris if she and Biden are “going to pack the Supreme Court to get your way?”

Harris did not answer directly and instead urged the Senate not to push forward with Barrett’s confirmation.

“Joe and I are very clear: The American people are voting right now. And it should be their decision about who will serve on (the Supreme Court) … for a lifetime,” the senator added.

Biden also avoided directly answering the same question at last week’s debate – but was opposed to expanding the high court when asked during the Democratic primaries.

The candidates also battled over Beijing, with the vice president slamming Biden for being a “cheerleader for Communist China,” while saying the Trump administration, which wants to “improve” relations with Beijing, will “hold China accountable” for the novel coronavirus. And he accused Biden of “cheerleading for China.”

Harris returned fire, saying the Trump administration over the trade war with China, claiming that the U.S. lost jobs in the midst of it.

But Pence fired back.

Harris used the debate to target the president for not paying enough money in taxes, and questioning who Trump might owe money to.

“We now know because of great investigative journalism that Donald Trump paid $750 in taxes,” Harris said during Wednesday night’s vice presidential debate. “When I first heard about it, I literally said, ‘You mean $750,000?’ Nope $750.”

Harris was referring to a recent report by The New York Times, who obtained information on the president’s 2016 and 2017 taxes, both of which show he paid a total of $750 in federal taxes each year.

The Times also reported that he paid no federal income taxes for ten of the 15 years prior to winning the presidency in 2016, largely due to the fact that he reported financial loses greater than his income.

“We now know Donald Trump owes, and is in debt for $400 million, and just so that everyone is clear, when we say in debt – it means you owe money to somebody,” Harris said Wednesday in answer to a question about presidential transparency.

Trump has disregarded the report as “fake news” and claimed that his tax returns would be available as soon as the IRS had completed their audit.

Pence, however, highlighted the president’s dismissal of the report and said, “the American people have a president who’s a businessman, a job creator, he’s paid tens of millions of dollars in taxes – payroll taxes, property taxes, he’s created tens of thousands of American jobs.”

During a discussion on taxes, Pence claimed Harris said “on Day One, Joe Biden will raise taxes.” Harris responded with laughter: “That’s not true.”

In a moment that lit up social media, a fly briefly landed on Pence’s head at another point during the debate.

Hours before the two candidates faced off at the University of Utah, a new Fox News national poll indicated Biden widening his advantage over the president. The survey – conducted after last week’s combative presidential debate – which appeared to do Trump no favors – and after the president was hospitalized – indicated Biden leading by 10 points, up from a 5-point advantage last month.

New polling in some of the crucial battleground states also pointed to a post-debate bounce for the former vice president.

Don't Miss it COVID-19 in B.C.: Vancouver confirms patio extensions, Richmond to vote on mandatory masks, and more
Up Next New measures to protect millions of jobs during Covid second wave – BBC News