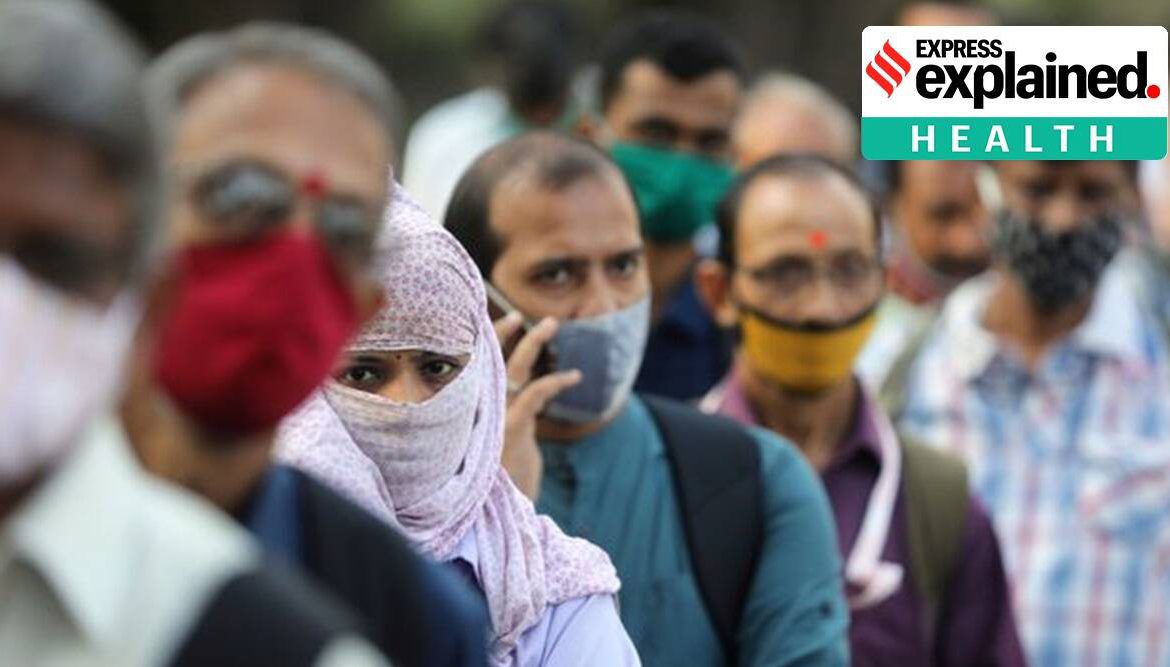 People wearing protective masks wait in line to board a bus in Mumbai on October, 6, 2020. (Reuters Photo: Francis Mascarenhas)

When will an antidote against Covid-19 finally become widely available? The answer to this question may eventually be found this month as a handful of coronavirus vaccine candidates near the end of late stage clinical trials. At least two vaccine frontrunners — Pfizer and Moderna Inc — are set to release late-stage and Phase 2 results this month.

While experts have said vaccines were likely to reach the general public in the March-April 2021, drugmakers have been more ambitious with their calculations, with some firms like Moderna Inc eyeing the emergency-use authorisation route to launch their shots by year end. In fact, Pfizer may also file for US FDA approval of its vaccine this month itself, Bloomberg reported.

There are 182 vaccine candidates in pre-clinical or clinical trials across the world. Of these, 36 are in clinical trials and nine in final states of human trials. In India, where two vaccines are in phase II trials and the one by Oxford in phase III, the Union Health Ministry has said it was expecting supplies to be available from January next year.

US biotechnology company Moderna, whose mRNA-1273 vaccine is undergoing phase-3 clinical trials in the United States on 30,000 participants, has said it might seek emergency-use authorisation (EUA) after November 25 once it had enough safety data. During public health emergencies, drug regulators allow the emergency-use authorisation of unapproved medical products or treatments.

“November 25 is the time we will have enough safety data to be able to put into an emergency-use authorization file that we would send to the FDA,” Moderna CEO Stephane Bancel told Forbes. However, he said approval wouldn’t be expected until the late first quarter or early second quarter of 2021.

Recent trial results: Recently, results of phase 1 trials of the mRNA-1273 vaccine showed that it was well-tolerated and generated a strong immune response in older adults (participants over 55 years of age).

The study, published in the New England Journal of Medicine, found that the immune response to the vaccine seen in older volunteers was comparable to that seen in younger age groups. Moreover, the blood of vaccinated volunteers contained robust binding and neutralising antibodies against SARS-CoV-2.

Also in Explained: How will the novel coronavirus behave in winter?

Pfizer Inc, which has jointly developed a candidate with German partner BioNTech SE, plans to distribute its single nucleoside-modified messenger RNA (modRNA) vaccine to Americans before the end of the year if found to be safe and effective, CEO Albert Bourla has said in an interview.

Pfizer has said it would submit data from the late-stage trial of its BNT162b2 vaccine to the FDA by end of October, putting it ahead in the race than Moderna. “If the FDA approves the vaccine, the company is prepared to distribute hundreds of thousands of doses this year itself,” he said in an interview on CBS television network.

Recent trial results: Two vaccine candidates — BNT162b1 or BNT162b2 — have gone into human trials so far. According to a report based on early phase clinical trials, published in the journal Nature, both the Pfizer vaccines induced a “robust” immune response in healthy adults aged 18-55 years. However, the BNT162b2 vaccine generated a lower adverse reaction, making it the safer candidate of the two.

According to a report in The Times, pharmaceutical giant AstraZeneca could get the required clearances for the Oxford University vaccine candidate by Christmas in the UK. A full vaccine roll-out programme for the masses could take six months or less after approval, the report said. Scientists are hopeful last-stage trial results would at least show that the ChAdOx1 vaccine (also christened AZD1222 and Covishield in India) prevents 50 per cent of infections, the threshold for success.

A Filipino girl wears a protective masks as she looks at an aquarium at the Tandang Sora jeepney terminal in Quezon city, Philippines on Monday, Oct. 5, 2020. (AP Photo: Aaron Favila)

Recent trial results: On September 9, the vaccine trials were halted after one of the participants in the UK developed an “unexplained illness” in an adverse event. The participant reportedly had developed a serious spinal inflammatory syndrome called transverse myelitis. Trials, however, resumed in the UK on September 12.

A report on early-stage human trial data of the vaccine candidate showed it had triggered a dual immune response in humans. Made from a weakened version of a common cold adenovirus that causes infections in chimpanzees, the vaccine induced neutralising antibodies that rendered the virus non-infectious in “all participants” who had been administered a second dose, a paper published in The Lancet said.

Johnson and Johnson, which began a 60,000-person phase III trial of its single-shot JNJ-78436735 vaccine last month, expects to submit results by the end of the year or early 2021. If they are positive, the company said it would seek emergency use authorisation. J&J plans to manufacture as many as 1 billion doses in 2021. The antidote stands out from the rest since it is the first one that could potentially be a single-shot vaccine. Vaccines by Moderna Inc, Pfizer Inc and AstraZeneca all require two shots separated by several weeks.

Nearly two months after Russia became the first country to approve a Covid-19 vaccine (Sputnik V) amid scepticism from the global scientific community, the country is likely to approve another shot as soon as October 15. Named EpiVacCorona, the vaccine is being developed by Vector State Virology and Biotechnology Center. Russia plans to manufacture an initial 10,000 doses, with production expected to begin in November.

Recent trial results: Siberia’s Vector Institute completed Phase II human trials of the vaccine in September and none of the volunteers showed any side effects except experiencing sensitivity at the injection site, Sputnik news said. “The first two phases of clinical trials demonstrated the effectiveness and safety of the EpiVacCorona vaccine,” Vector’s press department told the Interfax news agency.