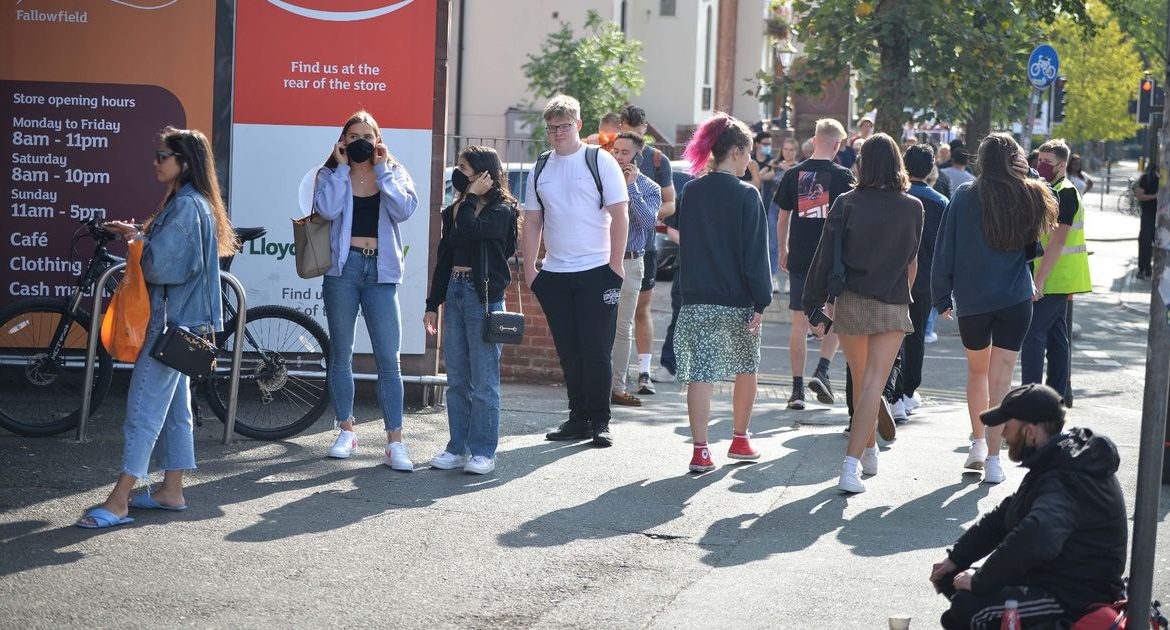 Manchester may be past the latest peak of coronavirus infections – just as a new lockdown looks set to come into force.

New analysis by the Manchester Evening News shows the number of positive cases has dropped 10 per cent week-on-week.

The latest figures released on Sunday evening show the infection rate in Manchester is now 477 cases per 100,000 people compared with 582 a week ago.

In total, there were 2,641 cases in Manchester in the week ending October 8 – that’s 292 fewer than the previous.

The fall from the peak, the week ending October 3, is as high as 18 per cent.

Ever since the spike in Manchester began, the city’s leaders have been pointing out that it has largely been driven by outbreaks among the student population.

Almost 1,500 students have now tested positive at the University of Manchester alone.

But the M.E.N understands officials have also begun to see a drop off in cases among students that would further back the suggestion that Manchester is heading in the right direction.

Meanwhile, infection rates continue to rise everywhere else in the region with Tameside, Wigan and Oldham all recording their highest rate so far.

However, the increase in Greater Manchester appears to be slowing down overall, and may even be levelling off.

It comes as the region’s leaders remain locked in negotiations with the government over new measures to contain the spread of coronavirus due to be announced by Boris Johnson on Monday.

The Prime Minister is expected to announce a simplified, three tier system of local lockdown.

Areas will be rated as either ‘medium risk’, ‘high risk’ and ‘very high risk’.

Manchester is expected to be placed in the Tier 3 category which could mean the blanket closure of hospitality venues such as pubs, bars and restaurant, as well as asking people not to leave the area.

The leader of Manchester council Sir Richard Leese said the government proposed the rules would be in place for four weeks before they would be reviewed.

However, the city’s leaders have been urging the government not to adopt such policies – arguing that the data does not show the spread of Covid-19 is linked to hospitality.

“As you will know, a large proportion of our recent increase in infections are amongst our student population, now being managed in confined ‘households’ mostly in halls of residence,” the letter says.

“Indeed, many of these were asymptomatic and were only picked up because of (locally delivered) mass testing.”

“We were assured in Parliament this week that confined outbreaks would not be a reason for tighter restrictions for the wider population.”

The University of Manchester has been publishing Covid data publicly and as of October 7 there have been 1,410 positive cases among students and 29 among staff.

The majority of transmission in Manchester is occurring in households, the MPs say.

The best way to combat this is to implement ‘a local, intense track and trace alongside well-resourced door-to-door activity able to communicate the guidance effectively’, they say.

“This would need to sit with the economic support available for people to self-isolate,” MPs add.

Mayors across the north including Andy Burnham are said to be in negotiation with the government on what new measures will be put in place and where.

However, Sir Richard Leese told Times Radio there was a “large gulf” between the city and Government in ongoing discussions about further restrictions.

He said: “We seem to have an almost impossible task of penetrating the Westminster bubble.”

Sir Richard said the council’s own data showed there was “no evidence closing pubs works”.

He also said the Government had talked about a four-week “sunset” clause to review any future restrictions, but there was “not clarity” on the issue.