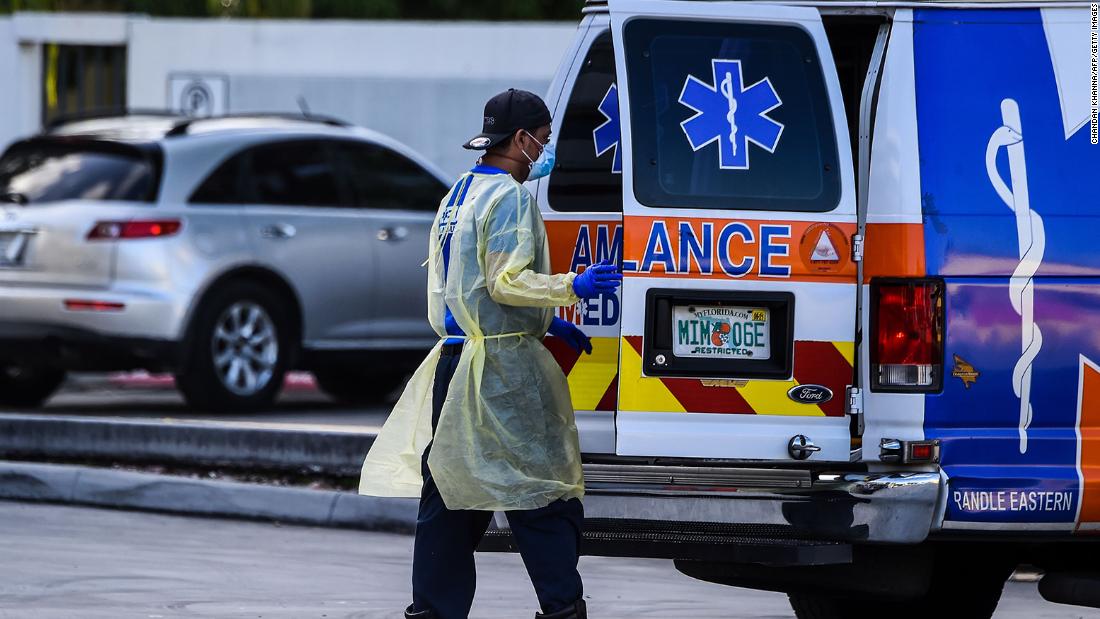 “We went down to the lowest point lately in early September, around 30,000-35,000 new cases a day. Now we’re back up to (about) 50,000 new cases a day. And it’s going to continue to rise,” Dr. Peter Hotez, dean of the National School of Tropical Medicine at Baylor College of Medicine, said Tuesday.

“This is the fall/winter surge that everyone was worried about. And now it’s happening. And it’s happening especially in the northern Midwest, and the Northern states are getting hit very hard — Wisconsin, Montana, the Dakotas. But it’s going to be nationally soon enough.”

For the whole country, test positivity averaged 5.1% over the past week as of Tuesday. But in at least 13 states, the figure was above 10%: in Alabama, Florida, Iowa, Idaho, Indiana, Kansas, Montana, Nebraska, Nevada, South Dakota, Utah, Wisconsin and Wyoming, according to the COVID Tracking Project.

“You’d like to see (the rates) less than 3%, optimally 1% or less,” Fauci, director of the National Institute of Allergy and Infectious Diseases, said at an event hosted by the College of American Pathologists.

“We’re starting to see a number of states well above that, which is often — in fact, invariably — highly predictive of a resurgence of cases, which historically we know leads to an increase in hospitalizations and then ultimately an increase in deaths,” he said.

In Denver, recent case counts are as “high right now as they were at the height of the pandemic back in May,” Mayor Michael Hancock said Monday.

He said hospitalizations have also soared, and residents could face tighter Covid-19 restrictions if the numbers keep going up.

In Wisconsin, a field hospital is opening this week to handle a rapid rise in coronavirus patients. The state recently reported record-high numbers of Covid-19 cases, hospitalizations and daily deaths. If Americans don’t turn the tide around, the US could be in for a devastating winter. The University of Washington’s Institute for Health Metrics and Evaluation projects more than 135,000 people in the US could die within the next three months.

“This winter — this November, December, January, February — could be the worst time in our epidemic,” Hotez said. “Get ready to hunker down.”

How overwhelmed hospitals can affect all patients

As we’ve seen throughout this pandemic, surges in new Covid-19 cases may lead to increased hospitalizations and deaths in the following weeks.

At least 10 states have reported record-high Covid-19 hospitalizations since Friday, according to data from the COVID Tracking Project. Five of them — Arkansas, Montana, North Dakota, Oklahoma and Wisconsin — reported records on Monday.

“Hospitals could again become overwhelmed,” emergency medicine physician Dr. Leana Wen said. “And then we’re not just talking about patients with coronavirus who might be in trouble. It’s also about other patients who might be coming in for heart attacks and strokes and car accidents who may find a situation that’s really untenable.”

“We’re quite fearful for what we are heading into,” she said.

Nationwide, hospitalizations have been ticking up — 35,072 were reported Monday, and the daily count has climbed relatively steadily since a recent low of about 28,600 on September 20.

More children are also being diagnosed with Covid-19, according to the American Academy of Pediatrics and the Children’s Hospital Association.

Their latest report found a 13% increase in child cases reported from September 24 to October 8 — with more than 77,000 new reported infections.

The report looked at data from health departments in 49 states, New York City, the District of Columbia, Puerto Rico, and Guam. Children represented about 10.7% of Covid-19 cases in the states that reported cases by age, the report said.

The news comes as many schools have returned to in-person instruction and are navigating challenges that come with new infections.

There’s no “one size fits all” strategy to safely returning to classrooms, Fauci said.

The decisions should be based on how widespread infections are in the community and how much surveillance is required, Fauci said.

“When schools are prepared, when they have a plan, when everyone is universally wearing masks, when they’re testing people in a surveillance way to get people who are infected out of the system, (and) they know what to do when they’re confronted with a person a child or older students who gets infected — it can work,” he said.

A vaccine trial is paused, but that’s ‘completely expected.

As Americans wait for a safe and effective vaccine, Johnson & Johnson has paused the advanced clinical trial of its experimental vaccine due to an unexplained illness in one of the volunteers, the company announced Monday.

The drugmaker said Tuesday that it didn’t know immediately know whether the ill volunteer had received the vaccine candidate or a placebo, and that it had little information about the illness itself.

Johnson & Johnson said that it learned of the illness Sunday and immediately informed the study’s independent Data Safety Monitoring Board (DSMB), which is reviewing the illness.

“It’s not at all unusual for unexpected illnesses to occur in large studies over their duration,” and sometimes they have nothing to do with the drug candidate, Mathai Mammen, global head of research at Johnson & Johnson’s pharmaceutical division Janssen, said Tuesday during the company’s third-quarter earnings call.

As of Tuesday morning, the study was still blinded, meaning neither those directly administering the drugs or placebos, nor the volunteers, know which volunteers are receiving which elements of the study, Mammen said. The DSMB can “unblind” the study to investigate the illness if necessary, he said.

“This is completely expected, and it’s just a reminder how ridiculous it is to try and meet a political timeline of having a vaccine before November 3,” Jha said, referring to President Donald Trump’s wishes to have a vaccine ready for the public by Election Day.

“The Johnson & Johnson trial is the biggest trial of the vaccine that I know of — 60,000 people,” Jha said. “Within that trial, you’d expect a few pauses.”

This is the second Phase 3 Covid-19 vaccine trial to hit the pause button in the US. AstraZeneca’s vaccine trial was paused last month because of a neurological complication in a volunteer. While that trial has resumed in other parts of the world, it remains paused in the US while health officials investigate.