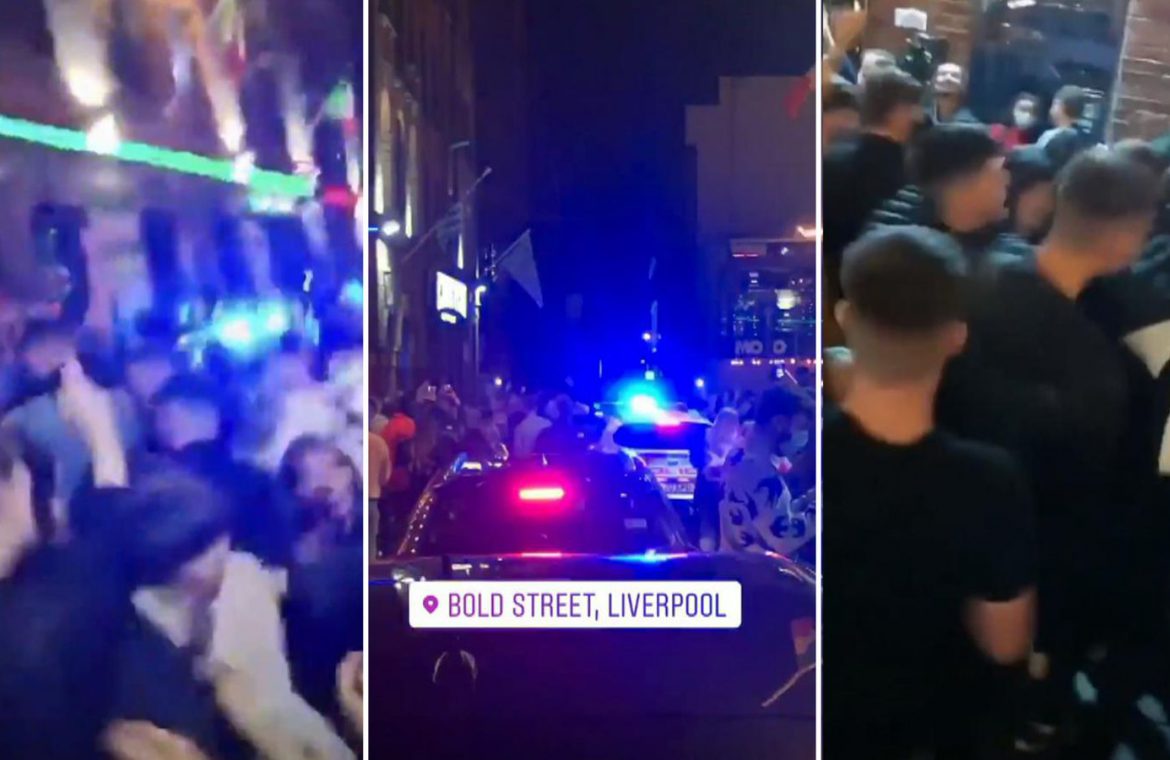 A “large crowd” had to be dispersed from Liverpool city centre after pubs closed at 10pm last night – two hours before tough Tier 3 coronavirus restrictions were imposed.

Intensive care doctors working in Liverpool have told Sky’s Inzamam Rashid that they are “disgusted” by what happened, with one saying: “They don’t care that people are dying from this disease, it is heart-breaking to watch.”

Another doctor told Sky News: “We have limited capacity in our ITUs across the network, but more worryingly, we have people in the corridors on trolleys waiting for beds.

“We are running at 100% capacity. Our Emergency Departments are overcrowded. No social distancing possible. I am dreading we are heading towards a disaster. Then you see crowds behaving such a way. I am really devastated and disgusted.”

“It’s gatherings like that which unfortunately don’t help in any way to bring down the escalation of the virus.”

While much of Liverpool was quiet, footage posted on social media showed dozens of people dancing in Concert Square, one of the city’s busiest nightlife hotspots.

Image:
A heat map on Snapchat shows there was plenty of activity in Concert Square

In a statement, Merseyside Police told Sky News that a large crowd was dispersed quickly and safely – and officers were stood down after all businesses in the area managed to close.

“While we understand how the new rules which are due to be implemented today are frustrating for some, we would continue to advise everyone to abide by them – including keeping social distancing – for the safety of everyone,” Chief Superintendent Peter Costello said.

According to the Liverpool Echo, a police car was attacked in Concert Square – with a witness claiming “a large group of young partygoers were defying every social distancing rule imaginable”.

As of midnight, the Liverpool City Region is subject to the toughest coronavirus restrictions in the country, which means hundreds of bars and pubs that cannot operate as restaurants have to shut.

Residents are also banned from socialising with other households indoors and outdoors, including in private gardens.

Currently, the Liverpool City Region is the only area to fall into the “very high” alert level – but Sky News understands that a “gold command” meeting is going to be held to decide whether nearby Greater Manchester and Lancashire should also fall into this category.

Image:
Some venues are angry that the hospitality sector is being blamed for rising coronavirus cases

Liverpool has the third-highest number of hospital admissions for COVID-19 patients in Europe, and more than 95% of the city’s intensive care beds are currently occupied.

It was Liverpool’s last night out before the lockdown – and most streets were deserted.

In the Dead Crafty Beer Company – a 15-minute walk from Concert Square – they called last orders at 9.15pm. As the bell sounded, customers seemed resigned to more restrictions on their daily lives.

The owner, Gareth Morgan, told me he will sell beer online to keep going, but he’s under no illusions it will be a tough few months – and he is frustrated at what the government is doing.

He told Sky News: “It feels like we’re just being kicked to the kerb. There’s no evidence backing up that hospitality is causing this massive spike that’s happened in Liverpool. I don’t deny the spike.

“There’s a massive influx of students, we’re a massive university town, all the offices have gone back to work, the schools have gone back – and hospitality, that’s been trading for two-and-a-half months without a large spike, is now being blamed.”

The rules coming into force will not only affect the hospitality sector. Gyms, betting shops and casinos will also close – and people will be restricted from socialising outside their household in any indoor or outdoor setting.

The government says the restrictions in Liverpool are necessary to bring down the R number – the infection rate.

Deaths in Liverpool have doubled in the past week, and hospital admissions are going up all the time.

The virus is surging – and worryingly, public health officials say the virus is still in the growth phase.

But Westminster is a long way from here – and many people are angry with how the rules have been handed down.

Independent gym owners also say the closures are not evidence based – and shutting them down will damage people’s mental and physical wellbeing, as well as causing viable businesses to go under.

Nick Whitcombe, from Body Tech Fitness, said he will defy the new restrictions and keep his doors open.

He added: “How we look at this is you have the value of the fine versus the cost of losing the entire business. This is fight or flight, we have no option here. This isn’t a case of if we close, we lose a little bit of money. If we close with the financial package that’s on the table, we will go out of business. This is our only option. We have no choice – it’s either pay the fine or lose absolutely everything.”

Image:
People in Liverpool enjoy a final night out before Tier 3 restrictions come into place

The measures may be reviewed in four weeks’ time, but the future here is far from certain.

And the question is will other areas soon be joining this city in the harshest lockdown category in the next few days.