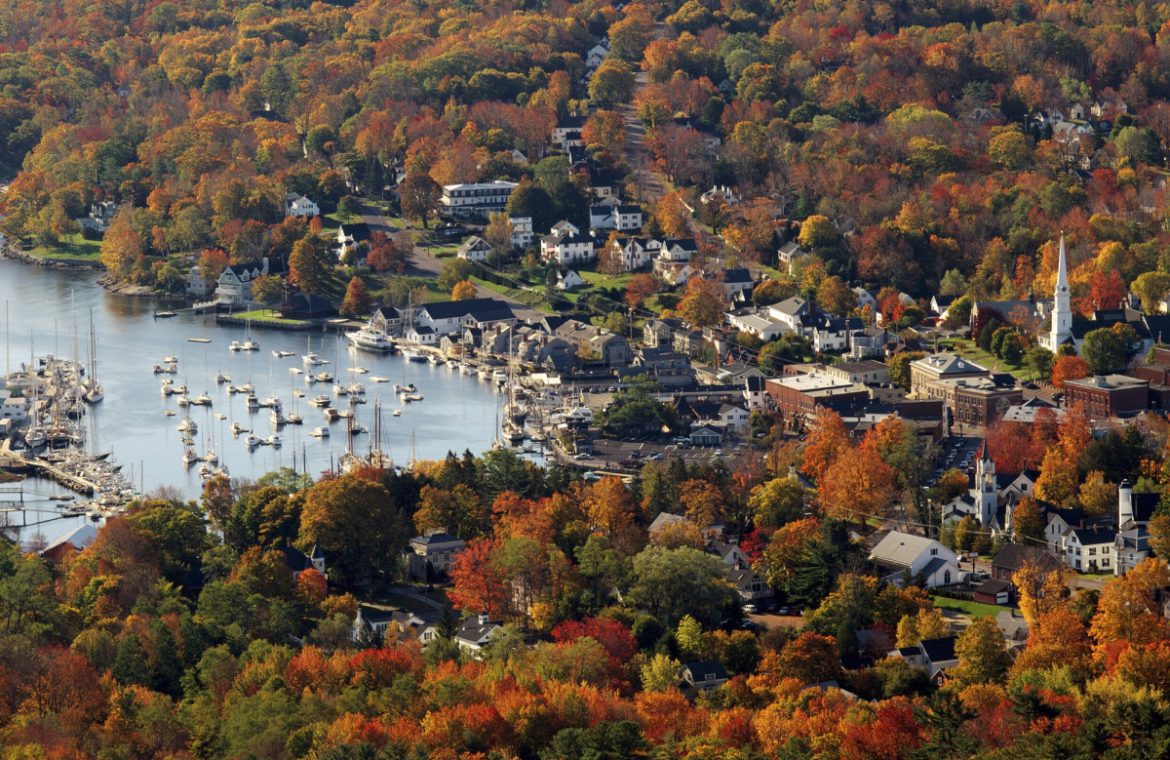 When asked if it was COVID-19 that forced him to flee New York for Maine in March, Jordan Cohen doesn’t waffle.

“One hundred percent,” the Greenwich Village native, 40, told The Post. “It was when things looked precarious and we didn’t know if we’d get out.”

Jordan grew up near Grace Church, attended Bronx Science and has family ties that go back to Ellis Island arrivals. But he also has warm memories of sleepaway camp and family vacations in Maine. It’s where he took his girlfriend, Elisabeth, on their first trip together. It’s also where, a year later, he proposed at Acadia National Park. So when it was time to beat a hasty retreat from the coronavirus, Jordan looked north.

“I always dreamed of living in Maine,” he said, “but it wasn’t possible because of work.”

Then the pandemic hit, and Jordan lost his tech job. He and his now-wife, Elisabeth, made the move, intending to “ride out” COVID in more rustic climes — but ultimately stayed.

After renting in Searsmont, a town of some 1,617 people inland from coastal Camden, they bought a historic home from 1925 on desirable Chestnut Street in Camden itself for $725,000. Elisabeth, 35, does sales work remotely from the finished attic (with a view of Mt. Battie), while Jordan started his own marketing agency, the Fox Hill Group.

Elisabeth Cohen, seen here with pup Juju, and hubby Jordan bought a $725,000 house in Camden, Maine, that has a cozy fireplaceJordan Cohen

“Life here is awesome,” he said. “I hike every morning. I’ve lost 30 pounds. It’s much more relaxed, but still productive.”

Other tristate-area denizens decamped to the Pine Tree State for peace — and peace of mind.

Prospective renters and buyers were desperate, according to brokers on the frontlines. “People have called and said ‘Get me any house in Maine,’ ” said Gwyneth Freeman of Better Homes & Gardens, The Masiello Group.

A strong economy and low interest rates made 2019 a historically good year for Maine real estate, resulting in 40 percent less inventory in 2020. When frantic out-of-staters began looking to escape the pandemic, housing demand exceeded supply, pushing prices up and accounting for a large volume of closed sales.

“Because of COVID, April and May sales were down,” said Tom Cole, president of the Maine Association of Realtors. “But June picked up, and July was gangbusters, with nearly 6 percent more out-of-state buyers than last year. In August, out-of-state sales went up nearly 10 percent, showing a clear trend of what’s happening.”

“It’s the most crazy market I’ve seen,” added Nancy Hughes of Camden Coast Real Estate. “There’s a very high demand, with people willing to pay high prices, but the lack of inventory made prices even higher.”

As a result, it’s common for a property to attract multiple offers; in fact, a “picturesque three-bedroom” in Brunswick (home to Bowdoin College) attracted a whopping 12. Bidding wars are now prevalent and offers made sight unseen, based solely on video tours given by realtors doing walk-throughs for clients sitting at home. Needless to say, houses don’t linger on the market long. The Brunswick house sold within four days of listing for $274,900 to a Nashville couple who paid well over ask: the handsome sum of $305,000.

Homes like this navy wonder in beautiful Brunswick are sparking fierce bidding wars.Mike Snow of Coldwell Banker Realty in Brunswick

“We’d see something we liked and look back a day later and it would be under contract,” said Rich G., a 37-year-old lawyer who relocated with his girlfriend from “hectic” Toms River, New Jersey, to Aroostook County.

The couple paid $159,000 for a three-bedroom ranch in Caribou, in the northeast corner of the state near the Canadian border. But they had to move fast.

“We made an offer within a day or two because we really liked the house,” said Rich, who asked not to publish his surname. “We acted quickly because we knew what was happening in the market.”

Coronavirus has led to more anxiety and claustrophobia in dense urban areas, low interest rates and job losses. “It’s COVID and all its tentacles making this market,” said Hughes, in Camden.

Larry Cohen, his husband and their dog, Wilbur (inset), discovered a Rockport fixer-upper while on the way to an Airbnb. They paid $1 million.Larry Cohen

Another one of those tentacles — travel bans — drove Larry Cohen and his husband to Maine. The married couple had planned on visiting Sicily in June, but when the coronavirus nixed that, the couple booked an Airbnb in Machiasport, a sparsely populated coastal enclave in “Down East” Maine near the Canadian border. Along the way they randomly happened upon stunning Rockport village, which is similarly on the shoreline but closer to the rest of the continental US.

“I said to my husband, ‘This is the most beautiful town I’ve ever seen,’ ” recalled Cohen, a 47-year-old nonprofit executive director.

Though Cohen and his husband once shared an East Village studio, they reside in a Bed-Stuy brownstone. But for their vacation home, they purchased a “fixer-upper” with harbor views for just over $1 million in Rockport.

“We wanted a place to socially distance easily and spend time comfortably,” said Cohen, anticipating more COVID-19 quarantines. “If stuck at home, we could look out at the water and relax.”

Freeman of Better Homes & Gardens thinks the pandemic allowed the now-remote workforce to entertain other places to live.

“Without the pandemic, people might not have thought outside the box,” the Bangor-based realtor said. “But now they realize they don’t have to go into the office and can work anywhere.”

In part because Morgan and Hayley Greenlaw-Morrow can work remotely, they sold their Connecticut house and bought a woodsy A-frame on Big Indian Lake.Morgan Greenlaw

That’s one reason Morgan and Hayley Greenlaw-Morrow sold their Connecticut home and relocated to a spot on Big Indian Lake in St. Alban’s, smack in the middle of the state. The married couple cheekily dubbed their waterfront A-frame “Camp Beaverwood.” While they love the tranquility of “lake life,” they also realize its financial benefits. Both women now work remotely, meaning they earn New York salaries but live in the Maine woods.

“It became increasingly obvious with a healthy income and significantly-reduced cost of living that we’d be really stupid to leave,” said Morgan, 33, a corporate event manager. Hayley, 45, does product development for a footwear company.

Mainers seem divided about people from “away” buying up local real estate. Many drivers with New York license plates report being the target of unexpected middle fingers, but other transplants tell a different tale.

Will and Deb Wood of Williamsburg (inset) bought a rundown Sebec Lake cabin as a second home. Neighbors in Dover-Foxcroft greeted them via the cinema marquee.Will Wood

After Will Wood (with wife Deb and teenager Winnie) bought 2-plus acres near Sebec Lake in Dover-Foxcroft — about 30 miles north of the Greenlaw-Morrows — the town posted a welcome sign on the marquee of the local movie theater.

And when it was time to prop up their ramshackle cottage, to be used as a second home, neighbors pitched in unbidden: One helped deliver heavy beams for free, while another appeared to assist in sliding them under the home.

One taciturn Mainer told The Post his opinion on the subject, if not his name. “We’re fine with people moving up here,” the long-time local drawled. “It’s just when they want to change everything that we could have a problem.”