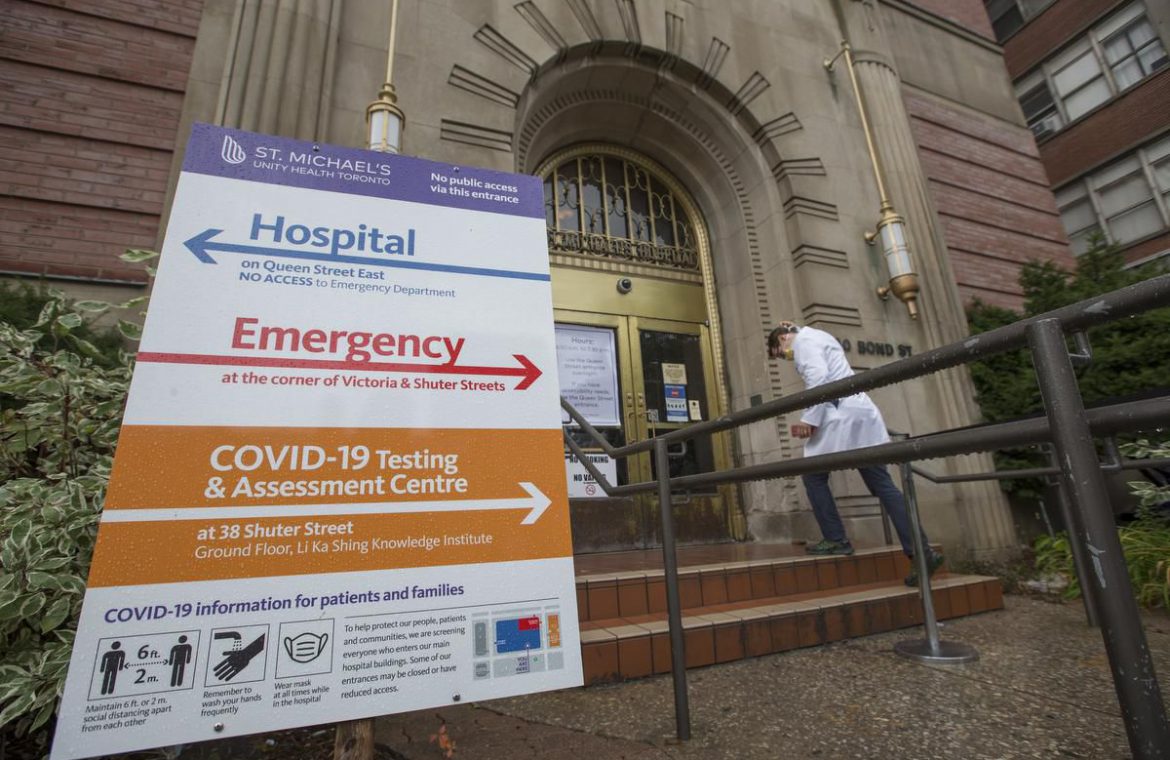 1:02 p.m.: Canada’s airlines need a federal bailout, which most of their peers worldwide long ago received, David Olive writes.

The alternative is that Air Canada and WestJet Airlines Ltd., which account for most of Canada’s air traffic, become insolvent as early as next year.

That, in turn, would stall Canada’s economic recovery, and cut Canadians off from each other as hundreds of communities lose their air service.

That doomsday scenario might seem impossible, but airlines, Olive writes, have been overlooked.

Airlines worldwide have received about $123 billion in government pandemic assistance. Canadian airlines have received next to nothing.

Authorities say only five of those deaths occurred within the past 24 hours, with most from between Oct. 17 and Oct. 22.

Montreal saw the highest number of new cases at 253, followed by Quebec City at 135 and the Montérégie region at 134.

The number of hospitalizations increased by nine from the previous day to 549 amid a sharp spike since late September, while the number of patients in intensive care dropped by six and now stands at 93.

11 a.m.: Considered one of the few ways to finally bring the pandemic under control, the search for a COVID-19 vaccine is moving fast.

Teams around the world are at work on dozens of potential vaccines in the hopes that one of them — and possibly more — will crack the code in the coming months; passing clinical testing and gaining regulatory approval.

From the cost for everyday Canadians, to the death of a trial participant, to U.S. President Donald Trump’s claims that a vaccine is “ready,” here’s what you need to know this week.

Read the full story from the Star’s Alex Boyd here.

10:15 a.m.: Ontario is reporting 978 new COVID-19 infections Saturday, a single-day record that has also pushed the province’s long-term average for daily infections to the highest mark for the pandemic.

An average of 802.6 new cases was reported daily over the last seven days, the first time the province’s seven-day average has passed 800. Experts point to the longer-term count as a better measure of the pandemic’s spread any one day’s total.

Meanwhile, the province is reporting another six deaths Saturday morning, with the provincewide number of hospitalizations also rising, up to 294, with 82 people in intensive care, 53 of whom are on a ventilator. All three of those numbers are the highest so far in the pandemic’s fall second wave.

The province’s previous single-day high was 939 cases, reported on Oct. 10.

In the spring, Ontario’s seven-day average never got higher than 600 cases daily. The province is testing much more broadly in the fall; in the first wave, many more people with mild or asymptomatic cases may have been missed.

9:02 a.m.: A police force in England says it will try to stop people from leaving Wales, which has started a 17-day lockdown to slow a surging rate of coronavirus infections.

The Gloucestershire Constabulary will patrol routes from Wales and pull over drivers they believe are making long journeys. Travelers without a good excuse will be asked to turn around. If they don’t comply, officers will inform their Welsh counterparts so they can take action because Gloucestershire police don’t have the authority to fine people travelling from Wales, the department said.

The situation illustrates the patchwork of coronavirus restrictions imposed by authorities throughout the U.K., which has Europe’s deadliest coronavirus numbers, with 44,661 confirmed virus deaths. Some 1,756 of those occurred in Wales, which has a population of about 3 million.

Under the U.K.’s system of devolved authority, Wales, Scotland and Northern Ireland have established their own public health rules. Meanwhile, the national government in Westminster has created a three-tiered virus alert system that applies to England alone.

8:43 a.m.: Halloween is just around the corner and with COVID-19 numbers rising, traditional trick-or-treating is uncertain. While some families are hoping to head out for an evening of trick-or-treating if local health authorities say it’s safe, others plan on staying closer to home, but still want to make it a special occasion.

And some Toronto businesses have come up with ways – inspired by their own kids — to help bring Halloween cheer (delivered) right to your front door.

Read the full story here about crafty Torontonians who are bringing Halloween cheer safely to their neighbourhoods this year.

8:32 a.m.: The mayor of Istanbul has tested positive for COVID-19, a spokesman for the Turkish city said Saturday.

Mayor Ekrem Imamoglu has received treatment at a hospital and his condition is good, spokesman Murat Ongun tweeted.

Istanbul, a city of 16 million people, has recorded 40% of Turkey’s total reported coronavirus cases, according to Health Minister Fahrettin Koca.

Imamoglu, who represents the opposition Republican People’s Party, or CHP, became one of Turkey’s most recognizable politicians after winning office in June 2019.

“I have to listen to the health professionals and we see the numbers going up and we’re concerned about that,” he told reporters Friday in Picton when asked why thousands of restaurants and bars are being limited to outdoor and takeout service.

“I hate shutting it down, I absolutely hate it. I understand what it takes to meet a payroll (and) take care of a business.”

Read the full story from the Star’s Robert Benzie here.

8:05 a.m.: Cancer surgeons in Ontario are reporting a sharp rise in the number of people coming to hospital with advanced cancers, an unintended consequence of the sudden shutdown of non-urgent health-care services during the spring wave of COVID-19.

In mid-March, the number of people getting routine cancer screening plummeted after the province halted its screening programs for breast, cervical and colorectal cancers.

Physicians say they’ve seen a corresponding drop in patients going for diagnostic imaging tests and that some patients are deferring care, over fears of contracting the coronavirus in hospitals or doctors’ offices.

Now, seven months into the pandemic, experts warn too many cancers are not being caught at their earliest stages, as patients arrive in hospital with more severe symptoms and advanced stages of disease. In turn, this leads to patients requiring more intensive surgery and longer hospital stays, and potentially seeing poorer long-term prognoses.

Read the full story from the Star’s Megan Ogilvie.

The Health Ministry on Saturday also reported 650 deaths, driving the country’s toll to 117,956.

The highest number of new infections is coming from Maharashtra, Kerala and Karnataka states. They’re also reporting the maximum number of daily recoveries.

Last month, India hit a peak of nearly 100,000 cases in a single day, but since then daily infections have fallen by about half and deaths by about a third, even as testing has remained consistent.

7:07 a.m.: Slovakia is adopting new strict limits on movement amid a record surge in coronavirus infections.

The number of new confirmed cases in one day reached 2,890 on Friday in the country of 5.4 million, the Health Ministry says, a record high. The EU nation has had over 40,800 confirmed cases and 159 virus-related deaths.

Starting on Saturday, people are allowed to travel only to work, buy food and medicine in the nearest stores, see a doctor, get tested for coronavirus or attend a funeral. They can walk a dog within 100 metres (yards) of their home and if they go to a park, it must be in their county.

On Friday, Slovak authorities started a plan to test almost the entire population for coronavirus.

The trials will be carried out until Sunday in the four hardest-hit counties. The antigen tests will then continue in the rest of the country.

7:01 a.m.: Coronavirus infections in the Czech Republic have hit a record high, soaring to over 15,000 in one day for the first time.

The Health Ministry says the day-to-day increase of confirmed cases in the hard-hit country reached 15,252 on Friday. The previous record of 14,968 was set on Wednesday.

The record surge has continued for last two months despite tight restrictions, including limits on movement, closing stores, schools and restaurants and banning sports competitions and gatherings of more than two people. Face masks are obligatory outdoors and in cars.

The number of COVID-19 patients in the hospital has surpassed 5,000 for the first time, putting the health system under pressure.

6:31 a.m.: Poland’s President Andrzej Duda has tested positive for the coronavirus, but is feeling well, his spokesman said Saturday.

The spokesman, Blazej Spychalski, said on Twitter that the 48-year-old conservative leader was tested the day before and his result was positive. He said the president is in isolation.

“The president feels good,” Spychalski said. “We are in constant contact with the relevant medical services.”

Duda’s diagnosis comes amid a huge surge in the number of confirmed cases of COVID-19 and virus-related deaths in Poland, a nation that saw only very low infection rates in the spring.

The fast spread of the virus is pushing the country’s strained health system to the breaking point. Doctors say patients are now dying not only from COVID-19, but from other illnesses that overwhelmed hospitals are not able to treat.

6 a.m.: The U.S. coronavirus caseload has reached record heights with more than 83,000 infections reported in a single day, the latest ominous sign of the disease’s grip on the nation, as states from Connecticut to the Rocky Mountain West reel under the surge.

The U.S. death toll, meanwhile, has grown to 223,995, according to the COVID-19 Dashboard published by Johns Hopkins University. The total U.S. caseload reported on the site Friday was 83,757, topping the 77,362 cases reported on July 16.

The impact is being felt in every section of the country — a lockdown starting Friday at the Oglala Sioux Tribe’s reservation in South Dakota, a plea by a Florida health official for a halt to children’s birthday parties, dire warnings from Utah’s governor, and an increasingly desperate situation at a hospital in northern Idaho, which is running out of space for patients and considering airlifts to Seattle or Portland, Oregon.

“We’ve essentially shut down an entire floor of our hospital. We’ve had to double rooms. We’ve bought more hospital beds,” said Dr. Robert Scoggins, a pulmonologist at the Kootenai Health hospital in Coeur d’Alene. “Our hospital is not built for a pandemic.”

Friday 9:13 p.m. Mexico’s northern border state of Chihuahua returned to the highest level of alert and lockdown Friday after coronavirus cases jumped there and hospitals began to fill up.

The Chihuahua state government declared the return to the “red” level of alert Friday, which closes down most non-essential services and encourages people to stay at home.

The Health Department said the state’s hospital beds were now 69% occupied, and that only about 23% of intensive care beds were open. The department said steps were being taken to expand hospital facilities.

The department also said that three other northern states — Durango, Coahuila and Nuevo Leon — were at risk of returning to maximum alert unless infections were brought under control.

Nationwide, 19 of Mexico’s 32 states will be at high alert starting Monday, 11 will be at medium alert and one state was considered at moderate risk level.

Mexico as a whole has seen 880,775 test-confirmed cases, up 6,604 from the previous day’s count, and 88,312 confirmed deaths, up by 418. Mexico has an extremely low testing rate, and if those who were suspected of having the disease but didn’t get a test are included, the case estimate rises to just over one million, and deaths amount to over 100,000.