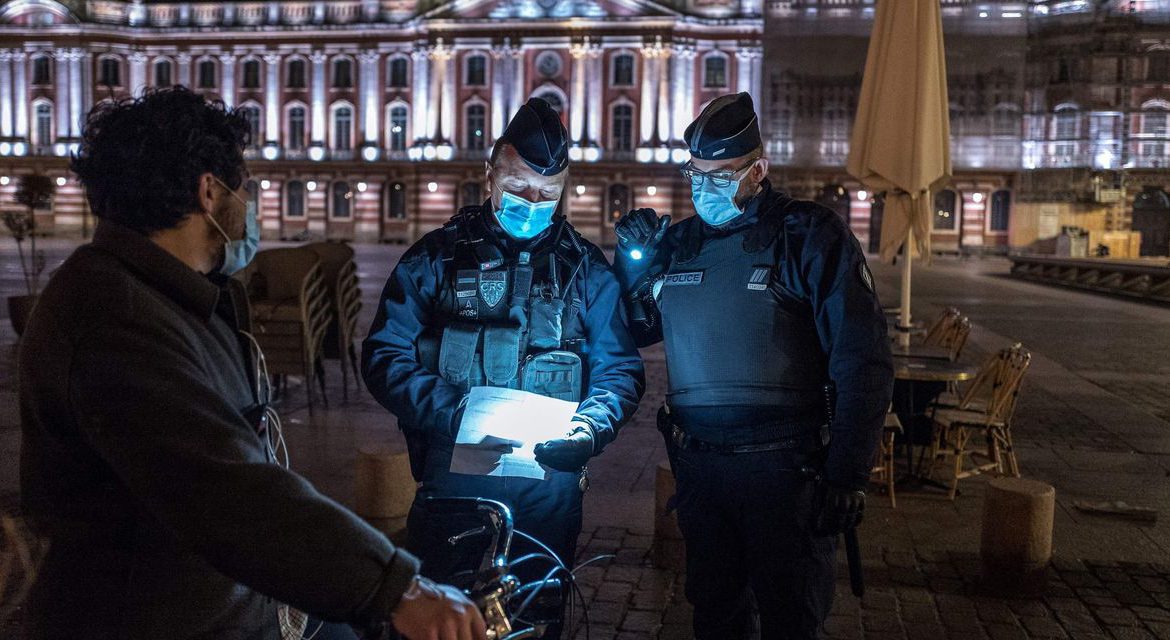 France announced a daily record for coronavirus infections, and Italy imposed the toughest restrictions on its population since ending its lockdown, as Europe’s second wave of the coronavirus pandemic accelerated.

Italy, struggling with an explosive rise in infections and approaching 20,000 confirmed cases a day, on Sunday announced the closure of all bars and restaurants at 6 p.m., the suspension of many sports and leisure activities, and a return to online lessons for high-school students.

“The objective is not to bring the contagion curve down to zero, but to bring it under control,” Italian Prime Minister Giuseppe Conte told a news conference.

French National police talked to a cyclist at the start of curfew in Toulouse, France, on Saturday.

He appealed to Italians to obey the new rules in the coming weeks so that daily life can return closer to normal as the December holiday season—a vital time for both family life and the economy—approaches. Mr. Conte acknowledged public frustration but said the new measures were the only alternative to a repeat lockdown that Italy’s economy can’t afford.

Confirmed infections in France reached 45,422 on Saturday, making it the worst-hit country in Europe’s second wave. Average daily cases in France have increased by nearly 50% in the past week alone. Although the recent death toll is much lower than this spring, nearly half of the country’s intensive-care beds are now occupied by Covid-19 patients, according to French health authorities.

“The epidemic is reaccelerating very strongly,” French President Emmanuel Macron said while visiting a hospital in a Paris suburb on Friday.

In Spain, which has also been at the forefront of the second wave, the government announced a state of emergency, as it did in March, giving national authorities greater power to impose social-distancing and emergency health-care policies. The government also announced a nationwide curfew between the hours of 11 p.m. and 6 a.m. and limited social gatherings to six people. Socializing and nightlife have been among the main causes of Spain’s rebound in virus cases. “The situation we are living in is extreme,” said Spanish Prime Minister Pedro Sánchez.

Detected cases have also spiraled in the U.K., Poland, and even Germany, which had until recently kept the virus under better control than other major European countries. The sheer volume of cases around Europe is threatening to overwhelm many countries’ capacities for testing, contact-tracing and isolating virus carriers.

Although Europe’s strict lockdowns this spring reduced the level of contagion to seemingly controllable levels, a relaxation of people’s behavior and the limited effectiveness of public policies have facilitated a steady rebound of infections since this summer, once again turning Europe into one of the focal points of the global pandemic.

Italy’s new measures, which take effect on Monday and last until Nov. 24, include the closure at 6 p.m. each day of all bars and restaurants, except for take-out meals. Gyms, swimming pools, movie theaters and concert halls must close again, as they did this spring. Group sports activities are suspended, except for elite-level sports such as professional soccer, from which spectators remain banned. High-school students will receive at least 75% of their lessons online, partially reversing Italy’s reopening of schools in September.

Europe’s governments are trying to avoid a return to full-blown lockdowns, including nationwide stay-at-home orders and the closure of nonessential businesses. But many countries are struggling with mounting public fatigue with anti-pandemic policies.

“There’s a lot of tiredness in the country. This pandemic is challenging us very strongly,” Mr. Conte said. “People are more frustrated than in the first wave.” He appealed to Italians to avoid moving about unless it is for work or other necessary reasons, but he didn’t reintroduce the mandatory stay-at-home orders that emptied the streets of Italian cities this spring.

So far, the rise in hospitalizations and deaths during Europe’s second wave hasn’t been comparable to this spring. But public-health experts warn that the return of widespread contagion could revive the pressure on hospitals if it isn’t brought under control.

The second wave of infections, combined with the piecemeal return of social-distancing restrictions on everyday life, is already slowing down Europe’s economic recovery from its deep, lockdown-induced recession this spring.