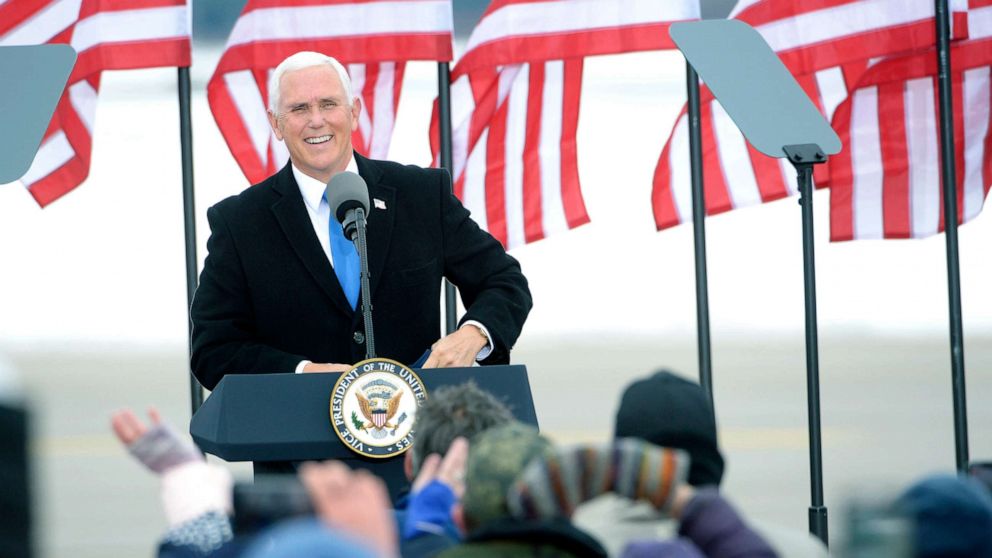 Vice President Mike Pence is committed to spending the final seven days of the 2020 election on the campaign trail, despite the fact that an outbreak of the coronavirus has struck his inner circle, including one of his closest confidants, Chief of Staff Marc Short. Seeing the busy schedule Pence and his team have kept up with, it’s possible the virus may have spread well beyond the confines of his office.

In the last week, Pence has crisscrossed the country to over half a dozen states, holding 12 campaign rallies and two private events. He also cast his early vote in person while back home in Indianapolis, Indiana.

ABC News has confirmed that along with Short, at least four others close to the vice president have tested positive for COVID-19 — and some are known to have accompanied Pence on his trips across the county. Other people in Pence’s inner circle who have tested positive include his top political aide, Marty Obst, and his bodyman, Zach Bauer. At least two others are now isolating after testing positive.

Still, Pence’s press secretary, Devin O’Malley, said in a statement that Pence will not be quarantining after coming into close contact with Short, and will instead continue his jam-packed campaign schedule — a move that has worried experts.

Dr. John Brownstein, a Harvard epidemiologist and ABC News contributor, said that Pence “clearly meets the CDC definition” of COVID-19 exposure and should voluntarily be in quarantine.

“With even just one positive staffer, the VP should have put himself in a 14-day quarantine, especially as it relates to non-essential activities like political rallies,” Brownstein said. “The public should be worried if the vice president continues his intense travel schedule, which is counter to all public health guidelines. Negative tests do not change the need to adhere to quarantine.”

But Pence is carrying on with his schedule, with stops planned in North Carolina, South Carolina, Michigan, Wisconsin, Iowa and Nevada through Thursday.

Here’s a look at all the places Pence has traveled to and the people he’s traveled with over the past week.

Monday, Oct. 19
Pence held two “Make America Great Again” rallies to start the week. One took place in Hermon, Maine, where Pence spoke to a few hundred people in an outdoor setting. Later that afternoon, he spoke at a rally inside an air hangar in New Cumberland, Pennsylvania.

Short, Obst and Bauer, Pence’s bodyman, both accompanied the vice president on the trip, along with spokeswoman Katie Miller, who tested positive for the coronavirus in May and whose husband, Stephen Miller, tested positive on Oct. 6.

Short and Bauer were seen without face masks while onboard Air Force Two en route to and from those events, and Bauer was seen traveling in the same SUV as Pence.

All of Pence’s staff were also seen without masks onboard Air Force Two.

Sources told ABC News that Obst was not in close proximity to Pence, but was near Short.

Following both rallies, Pence stepped off stage to walk the rope line without a mask, though he was separated by several feet from the nearest supporters. He also participated in interviews with local reporters at both stops and did a live interview with Fox News Business host Lou Dobbs in Pennsylvania.

“We have told Pennsylvanians who attended events to contact their health care provider if they have questions about their health and remind them that testing is available,” said Nate Wardle, a spokesperson for the Pennsylvania Department of Health. “We also have encouraged them to download the COVID Alert PA exposure notification application so that if they test positive or came in contact with someone who has, the app will provide anonymous notifications.”

Pence returned to Washington, D.C., after the event.

Tuesday, Oct. 20
The vice president remained in Washington, D.C., where he held a White House Coronavirus Task Force meeting in the Situation Room, according to his schedule.

Among those joining Pence in-person at the meeting was Surgeon General Jerome Adams, Centers for Disease Control and Prevention Director Robert Redfield, Dr. Deborah Birx and Housing and Urban Development Secretary Ben Carson, administration officials familiar with the meeting told ABC News. Those attending in person were required to take a COVID-19 test prior to the meeting, the sources said. Dr. Anthony Fauci joined the meeting virtually.

On Oct. 16, the White House released a photo of the task force meeting, showing everyone in the room wearing face masks except for Pence. It’s unclear if he wore one during their meeting on Oct. 20.

Pence also taped an interview with “60 Minutes” on Tuesday. The vice president did not wear a mask during his interview with Lesley Stahl, who previously tested positive for the virus.

Birx sat toward the back of the plane during flights to Ohio and Short sat next to her at times. She wore a mask but he did not.

U.S. Secret Service agents and the flight crew all wore their masks, but most of the vice president’s staff remained maskless during flights.

In Portsmouth, New Hampshire, and in Cincinnati, Ohio, Pence walked on and off stage without a face mask and walked near the front row of supporters without a mask for about four minutes — with a buffer between them. He participated in one local interview after the rally.

In Cincinnati, Ohio, Pence held a rally inside an air hangar with over 800 supporters. He took the stage without a mask and did not wear one as he walked near the front row of supporters, waving and giving them a thumbs up.

Pence returned to Washington, D.C., at the end of the night.

Thursday, Oct. 22
Short and O’Malley accompanied Pence to campaign stops in Michigan and Indiana. None were seen with masks on during the flight from Washington to Michigan. Most staffers were also seen taking off their masks during the flight or wearing them below their chins.

Pence boarded the plane and disembarked at all stops without a mask.

After he finished speaking in Waterford Township, Michigan, Pence walked along the rope line without a mask to take photos with supporters — though there was some distance between them.

The vice president arrived in Fort Wayne, Indiana, just after 3 p.m. ET, and walked off Air Force Two without a mask. He participated in a private Trump Victory event before speaking at his rally.

He walked the rope line near supporters, but several feet away, taking photos and greeting supporters without a face mask.

The vice president participated in one regional interview before departing to Indianapolis, where he spent the night.

Friday, Oct. 23
Pence started the morning by casting his ballot early and in person at the Marion County Clerk’s Office with second lady Karen Pence. Both wore their face masks while in the building.

After voting, Pence participated in a private Trump Victory roundtable in Indianapolis.

In the afternoon, Pence boarded Air Force Two, without a face mask, to travel to his first campaign rally of the day, in Swanton, Ohio.

Short and O’Malley are still traveling with the vice president.

Most of his staff, and all of the U.S. Secret Service crew and flight crew, wore face masks during the short flight.

He participated in two local interviews before departing for West Mifflin, Pennsylvania.

Some aides and staff were seen taking off their face masks during the flight to Pennsylvania, or placing them below their chins.

He participated in two local interviews and also pre-taped an interview with Fox News’ Sean Hannity.

Saturday, Oct. 24
Running over an hour later, Pence left Washington, D.C,. at 3:15 p.m. ET for a campaign swing through Florida and was seen wearing a face mask as he stepped off Marine Two and boarded Air Force Two.

For the first time in a week, Short did not accompany Pence.

At 5:23 p.m. ET, Pence stepped off Air Force Two with a face mask, but took it off before descending the stairs and jogging over to the stage at his first rally in Lakeland.

The vice president would not go down to the rope line after concluding his remarks. Pence stayed on stage and waved to supporters from there and proceeded to head back to his plane.

At his second rally in Tallahassee, Pence again stayed on stage after his remarks, without putting his mask on, and waved to supporters from there.

As Pence was en route back to Washington, D.C., news broke that Obst and Short had both tested positive for COVID-19 and had begun self-isolating.

Sunday, Oct. 25
ABC News confirmed that at least five individuals in the vice president’s orbit had now tested positive for COVID-19 and that three of those staffers had been quarantining since mid-week.

Pence arrived at Joint Base Andrews wearing a face mask and ignoring questions from the pool reporters asking why he’s still traveling and holding campaign events when those close to him have the coronavirus.

The vice president and everyone on board Air Force Two were all wearing face masks, except when eating or drinking.

He landed in Kinston, North Carolina, for his only rally of the day and wore his mask as he walked from Air Force Two to the stage for the outdoor airport rally.

Pence made no mention of the outbreak in his office during his remarks.

The vice president remained on stage after his speech and waved to supporters from there. He did not get near them on the rope line.

Pence returned to Washington, D.C., just after 7:30 p.m. ET and all on board the flight kept their masks on.

Don't Miss it What you need to know about COVID-19 in Ottawa on Tuesday, Oct. 27
Up Next Travel chaos as UK warns against visiting Spain and imposes new quarantine