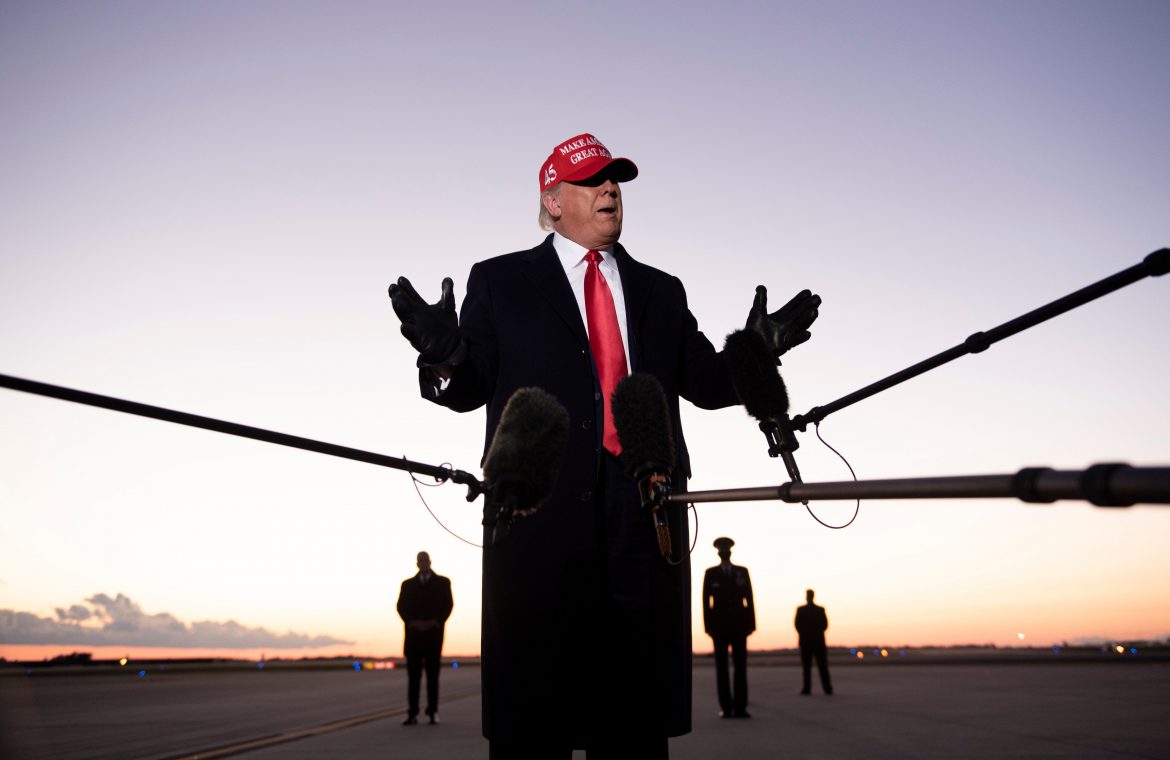 During one of his final 2020 election cycle campaign rallies, this one in Michigan, the president claimed his general election foe, former Vice President Joe Biden, would turn the entire country into a “prison state” and would deploy a vaccine, if he is elected on Tuesday.

The president is barnstorming through four battleground states with five Election Day eve rallies as he tries to erase what was an average of a 5-percentage point lead in a handful of swing states on 13 October. That lead now is just 2.7 points, according to RealClearPolitics.

Mr Trump first said he hoped a vaccine would be ready for some Americans, likely seniors, before Election Day. That timeline then slid to perhaps this year, but probably early 2021.

With part of his conservative base sceptical of all vaccines, it is not surprising that part of his campaign closing argument is a coronavirus-blocking drug would not be required for all US citizens.

For his part, Mr Biden also has stopped shy of proposing a vaccine mandate.

“Once we have a safe and effective vaccine, it has to be free to everyone, whether or not you’re insured,” the Democratic presidential nominee said during a 23 October speech in Wilmington, Delaware.

The former VP said, if elected, he would direct his administration to “bulk-purchase as many doses as necessary of the Covid-19 vaccine so we can provide it free to those who are uninsured, under-insured or Medicaid-eligible.”

Over half of those surveyed (54 percent) by The Independent and JL Partners said they want the sitting president, whoever that is when a drug is ready, to take it before anyone else.

Mr Trump in July sent mixed signals about taking an inoculation first, but did say he is willing to do so — despite what he fears would be political risk for himself.

“Well, you know the way it works,” Mr Trump told Dr Marc Siegel on Fox News. “If I’m the first one they’ll say, ‘He’s so selfish, he wanted to get the vaccine first.’ And then other people would say, ‘Hey, that’s a brave thing to do.'”

“I would absolutely if they wanted me to and they thought it was right, I’d take it first or I’d take it last,” the president said.

But he never defined who “they” are.

“Either way I’d lose on that one, right?” he added. “If I don’t take it they’ll say, ‘He doesn’t believe in the programme.’ But whatever I think is best whatever we all agree is best, I would certainly do that.”

What’s more, just over half of Americans have confidence in a coronavirus vaccine, but when Donald Trump and Joe Biden are brought into the conversation, scepticism grows.

Fifty-one per cent of those surveyed for a JL Partners/The Independent poll expressed confidence in a Covid-19 vaccine, while 41 per cent said they are not confident – including 17 per cent who have no confidence at all.

But that confidence drops when both presidential nominees’ names are mentioned, to 40 per cent if Mr Biden endorses a drug and to 25 per cent if Mr Trump does so.

The president tells rally crowds “we are rounding the corner” in fighting the spreading-again virus, but Mr Biden accuses him of “waving the white flag” and never really trying to stop its spread.

As for a vaccine: during a town hall hosted by ABC News, Mr Biden said if Anthony Fauci, the country’s top infectious disease official who is in another war of words with the president amid his latest media blitz, signs off on a vaccine, “I’d take it.