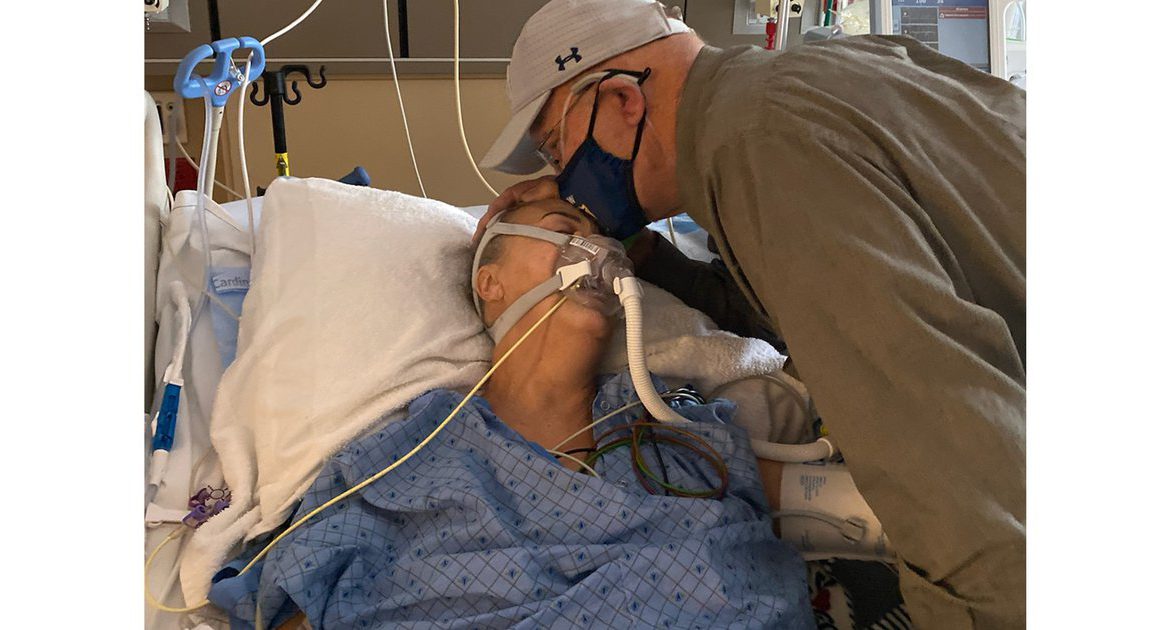 Oct. 11, Lindsay Wootton said, was among the worst days she’s ever had.

First, she learned her mom, Tracy Larsen, a 56-year-old who worked with special-needs kids in the North Sanpete School District, was going to die after a long battle with the coronavirus. A few minutes later, she learned her grandpa, Bert Porter, would, too.

In the father and daughter’s last phone conversation, Porter explained to Larsen he was dying. She told him that she was, too.

“I’ll look for you in heaven,” Porter told her. He was dead less than an hour later.

Both died after spending time in the same Orem hospital last month, from complications from the same disease. Wootton’s father, Chad Larsen, a college softball coach, also caught it and spent more than a month in the hospital.

He is still on oxygen, reeling from the damage COVID-19 did to his lungs and from losing his wife and father-in-law.

“People are lucky that it might not hit them as hard. Other people are unlucky. I hate to see that they say there’s a 99.9% survival rate, because in my family we have a 33% survival rate,” Wootton said. “It’s devastating.”

As the virus ravages through Utah’s health care system — hospitalizations for the disease had reached record highs five days in a row this week, as of Thursday — Wootton said she saw firsthand how overwhelmed nurses and doctors are.

And Heather Edwards, whose son Keegan Theurer was hospitalized for a rare complication from the virus, was in tears as she recounted the selflessness of the doctors and nurses who rallied to try to help him.

“I’m thankful every day for the physicians who helped Keegan,” Edwards said. “They put their lives on the line every day to be in that room. They weren’t thinking about themselves.”

Both women want people to know that the coronavirus is real and can kill.

Sometimes, Wootton said, it would take a nurse more than 30 minutes to respond after her mother pressed the call button. Wootton said when that would happen, she’d leave the room to try to find a nurse, but they were never at the desk because they were always busy with other patients.

(Photo courtesy of Lindsay Wootton) Before her COVID-19 diagnosis, Tracy Larsen plays with her grandchildren at a playground. Larsen died Oct. 29, 2020, after a long fight against coronavirus complications.

When a nurse did respond, it often wasn’t Larsen’s assigned nurse — it was whoever had a spare moment, and that person didn’t know Larsen’s case or her needs. One of Larsen’s doctors worked 19 days straight, Wootton said.

While they waited for help, Wootton said, she’d sing to her mom or try to tickle her — anything to take her mind off the pain and what it signaled about her impending death.

Wootton said her father, Chad Larsen, was the first one in her family diagnosed with COVID-19. She doesn’t know how he got it but suspects he could have been infected while staying in a hospital room on the infectious disease floor for Ramsay Hunt syndrome, a shingles outbreak inside his ear canal.

About a week into his stay, hospital staff allowed visitors to his room. Wootton and her mother visited, and a few days later, both Chad and Tracy Larsen tested positive for coronavirus.

(Photo courtesy Lindsay Wootton) Bert Porter and his daughter, Tracy Larsen, visit with each other while in the hospital battling complications from COVID-19. The father and daughter both died from the disease in October 2020.

Porter had stayed at home as much as possible, Wootton said. The 80-year-old had chronic obstructive pulmonary disease and emphysema and knew his chances for survival weren’t good if he got COVID-19.

So he generally didn’t go inside grocery stories. If he needed to get gas, he’d go early in the morning to be around fewer people. He kept sanitizer wipes in his car and used them. He didn’t allow anyone inside his home but would sit outside in lawn chair, wearing a mask, to talk with one of his daughters. And yet, he still got the disease. It’s unclear from where.

Edwards also isn’t sure how Theurer became infected with COVID-19. He might have gotten it while working at Thermo Fisher Scientific in Logan, but she noted that Theurer was required to wear personal protective equipment at work. She said he once sent her a selfie where it looked like he was wearing a full hazmat suit.

(Photo courtesy of Heather Edwards) Keegan Theurer poses for a photo while on a vacation with his mother, Heather Edwards, in Italy. Theurer, who was 22, died of coronavirus complications on Oct. 24, 2020.

Aside from that, she said, he was mostly a homebody who liked to play video games and draw. He did go out with friends to hike or hang out on weekends.

“Granted he could give me a few gray hairs,” she added, like any child can.

Edwards said that Theurer had been sick for a while and called her Oct. 10 — a Saturday — saying he was having terrible headaches, had been throwing up and had a chronic cough. He got tested that day and the results came back positive.

That day was the last time Edwards, who lives in San Diego, spoke to him. “The sickness just continued to get worse and worse,” she said.

Three days later, a Wednesday, he was in the emergency room in Logan. He could barely stand and hadn’t been able to eat.

Then the hallucinations started. Edwards said medical staff had to keep Theurer sedated because delusions made him get up from his hospital bed and run around the room, yelling at people who weren’t there.

By Thursday, he was in a coma. On Friday, he was flown by helicopter to Intermountain Medical Center in Murray.

Doctors determined that Theurer, a healthy young man, had a rare complication from the coronavirus called acute disseminated encephalomyelitis, she said. The severe headaches he’d had were a side effect of the rapid swelling in his brain, which damaged the white matter in his brain. That caused the hallucinations.

Edwards said when Theurer was first hospitalized, she didn’t realize how seriously ill he was. “I kept thinking he can make it through this,” she said, “because he was strong.”

Yet the swelling began to damage the other parts of his brain, the areas that control muscle coordination and kept him breathing.

On Oct. 24, doctors declared him brain dead and his family decided to take him off life support.

Edwards made the 12-hour drive to Utah when she learned Theurer wasn’t going to survive. She arrived at the hospital in time to hold Theurer’s hand before he died.

“He just looked like he was asleep,” Edwards said. “There was no indication that there was anything going wrong.”

She said it feels surreal to her that Theurer is dead. It still doesn’t seem possible that her son, the little boy who could befriend every kid at the playground, and made an effort to play games and chat with his younger siblings online despite living in different states, could have succumbed to this virus.

‘It’s happening … all over’

Wootton, too, got to hold her mother’s hand as Larsen died.

Wootton said it was torture watching her normally energetic and bouncy mom slowly die, gasping for breath, but she wishes others could have seen her experience. Maybe it’d make those who refuse to wear masks or stay 6 feet away from others think again, she said.

Edwards said she gets upset when people say the coronavirus is some kind of conspiracy. Eventually, she thinks everyone in the U.S. will know someone who’s died from it, or almost did.

(Photo courtesy Heather Edwards) Heather Edwards and her son Keegan Theurer relax on the beach in San Diego. Theurer, who was 22, died of coronavirus complications on Oct. 24, 2020.

She said she tries to get through each day in this reality, where a virus can kill an otherwise healthy young man, in the same way the health care workers who took care of her son do.

“Be careful, be smart, and be kind,” Edwards said. “Those are the things that are going to help us, because that’s what the doctors are doing.”

Don't Miss it Latest snapshot of the coronavirus impact | Port Macquarie News
Up Next Do teenagers sacrifice their youth for the health of the elderly? | COVID-19 Special