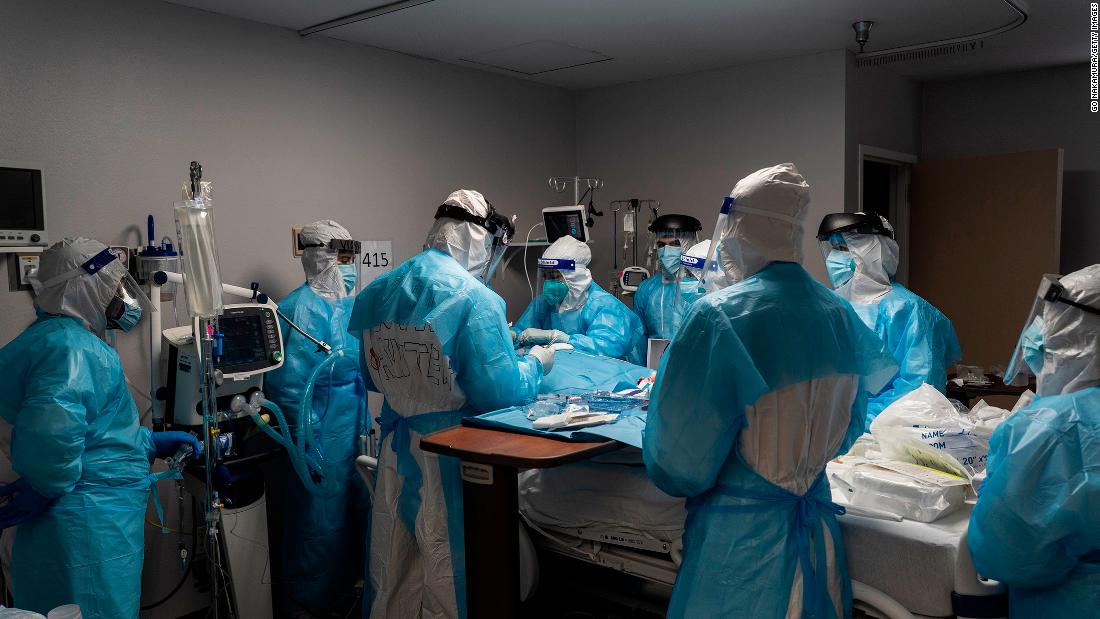 The US reported more than 1,140 coronavirus deaths Friday, the fourth straight day that count has risen above 1,000. The last time that happened was in August, Johns Hopkins University data show.

That’s a bleak outlook, considering this week saw multiple new highs. The US beat its own record of new daily cases for three days straight, topping 100,000 a day since Wednesday.

On Friday, the US reported more than 126,000 new cases — the highest one-day tally yet, Johns Hopkins data show.

On the same day, at least 16 states reported record-high Covid-19 hospitalizations, according to the COVID Tracking Project. More than 54,000 coronavirus patients are now hospitalized across the country — not far from the country’s pandemic peak of 59,940 in mid-April — according to the project.

Only one state trending in the right direction

At least 41 states now report more Covid-19 infections than the previous week and only one state — Tennessee — is trending in the right direction, according to Johns Hopkins data.

In Maine, the seven-day weighted Covid-19 positivity rate tripled over the past two weeks, according to Dr. Nirav Shah, director of the Maine Center of Disease Control and Prevention.

Community transmission in the state is expanding, mainly from small household gatherings, Shah added. It’s those gatherings that public health officials nationwide have warned are fueling the spread of the virus and could further drive the surge during the upcoming holidays.

Colorado has reached its highest number of Covid-19 hospitalizations, exceeding its April peak, the officials said.

“We reached this even faster than the modeling predicted,” officials said. “If the epidemic curve is not bent, Colorado could surpass intensive care unit (ICU) capacity in late December instead of January as reported in last week’s modeling report.”

In Ohio, the governor said Friday the state saw 5,008 new infections, the highest number of cases recorded in a 24-hour period. The climbing numbers are likely to trigger new mandates, he said.

“When we see our hospitals starting to fill up,” Gov. Mike DeWine said, “the orders we will have to implement when it really gets dire will be uniform throughout Ohio.”

In some parts of the country, new orders have already arrived.

In Massachusetts, where Gov. Charlie Baker said this week cases are up by 278% since Labor Day and hospitalizations rose by 145%, new measures went into effect Friday.

They include instructions to stay home between 10 p.m. and 5 a.m., a news release from the governor’s office said earlier this week.

“We know we’re asking a lot here,” Baker said. “And it comes on top of asking a lot of employers and residents for many months now with the virus. As we’ve said before, it isn’t going anywhere, and until there’s a vaccine or medical breakthrough, it’s us against the virus.”

“We’re on a very dangerous path,” Mayor Michael Hancock said. “Across the state, including here in the Denver area, hospitalizations have increased over 40% in just the last week.”

Meanwhile, a new modeling study published Friday shows more than 1 million US infections and more than 59,000 deaths could have been prevented by early May if mitigation steps had been implemented two weeks earlier.

Sen Pei, a research scientist in the Columbia University Mailman School of Public Health, and colleagues built a Covid-19 transmission model that looked at all US counties from February 21 through May 3.

The study found that beginning such interventions two weeks earlier — on March 1 — could have resulted in more than 1 million fewer confirmed cases and more than 59,000 fewer deaths.

“Our results demonstrate the dramatic impact that earlier interventions could have had on the COVID-19 pandemic in the US,” the authors wrote. “Looking forward, the findings underscore the need for continued vigilance when control measures are relaxed.”

What’s needed to control a rebound of Covid-19 outbreaks, they wrote, is rapid detection of increasing case numbers and quick re-implementation of control measures.

Study describes how Delaware reduced its infections and deaths

Leading experts have also highlighted the importance of quick and stringent mitigation measures, and a newly published study backs their points.

Delaware’s state-mandated Covid-19 mitigation efforts and investigations dramatically reduced the number of Covid-19 cases, hospitalizations and deaths earlier this year, according to a study published Friday in the US Centers for Disease Control and Prevention’s Morbidity and Mortality Report.

The first Covid-19 case in the state was identified March 11, and officials immediately went to work to manage the pandemic, starting by investigating all identified cases. Nearly two weeks later, the state issued a stay-at-home order lasting through June 1.

By late April, there was a statewide mask mandate. By mid-May, the state started broader contact tracing.

Looking at cases through June, it appears those steps were the right ones.

From late April through June, the incidences of Covid-19 declined by 82%, hospitalizations dropped by 88% and mortality fell by 100%.

“Masks are critical for reducing SARS-CoV-2 transmission from persons with symptomatic or asymptomatic infection,” the report said. “Early detection, self-isolation, and investigation of Covid-19 cases and self-quarantine of close contacts can be effective in preventing transmission, if contacts are identified and reached soon after exposure.”

Don't Miss it Winter will help COVID-19 spread more easily, experts say — here’s what they suggest you do about it
Up Next US breaks 24-hours coronavirus record | DW News