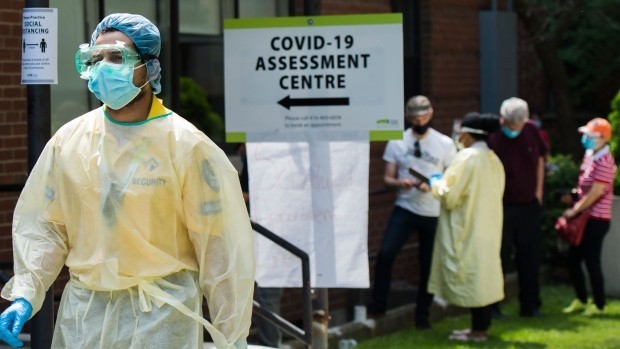 Ontario is reporting 1,328 new COVID-19 infections on Sunday, setting a new record-high of daily infections for a second straight day.

The previous high was logged on Saturday with 1,132 new cases. On Friday, the province reported 1,003 new infections and 998 on Thursday.

This is the fourth day in the past week that the daily count of new cases has surpassed 1,000.

The seven-day rolling average now stands at 1,063, an increase from 909 recorded last week.

Thirteen more people have died from the virus in the past 24 hours, bringing the province’s death toll to 3,233.

Seven of the fatalities were long-term care home residents.

Currently, there are 91 long-term care homes in Ontario with a COVID-19 outbreak.

Toronto also recorded its highest single-day case count on Sunday since the beginning of the pandemic in March.

“Locally, there are 434 new cases in Toronto, 385 in Peel, 105 in York Region, 71 in Ottawa, 68 in Hamilton and 56 in Durham,” Ontario Health Minister Christine Elliott tweeted on Sunday.

Both Toronto and Peel saw notable increases in case counts on Sunday compared to a day ago when they recorded 336 and 258 cases, respectively. Durham Region’s cases also nearly doubled compared to Saturday when it recorded 30 new infections.

Meanwhile, Halton Region recorded 43 new cases, down from 64 on Saturday.

According to public health officials, nearly 37,600 tests were completed in the last 24 hours, down from the 39,165 tests processed on Saturday. The province has yet to hit its target of completing 50,000 tests daily.

There are currently 35,776 tests still under investigation.

The province’s positivity rate is now 3.5 per cent, an increase from 2.8 per cent reported on Saturday.

Health officials say there are 877 more resolved cases in the province, bringing the amount of active cases to 9,105, up from 8,667 a day ago.

To date, there have been 84,153 cases of the novel coronavirus in Ontario and 71,815 recoveries since January.

Hospitalizations continue to remain at a heightened rate across the province as 374 people are currently hospitalized with the virus.

The Ministry of Health says that number could be higher as approximately 40 hospitals did not submit data for Nov. 6, as is often observed on weekends.

The province did not provide data on how many patients are currently in intensive care and breathing with the help of a ventilator.

Peel issues stricter restrictions as hospital system is at risk

The new record of cases comes as Peel Region’s top doctor issued stricter restrictions on Saturday in addition to the measures recently imposed on the region by the provincial government’s new colour-coded system.

Some of the new measures include closing meeting and event spaces, including banquet halls, restaurants and bars restricting seating to people from the same household to avoid mixed seating and requiring pre-registration at gyms and fitness centres.

Some of the measures will take effect on Monday and will remain in place until further notice.

In addition, as of Nov. 13, social gatherings celebrating holidays and life events in business establishments and wedding receptions will not be allowed.

Loh said the added restrictions are needed to respond to the rapid rate of virus transmission which is significantly impacting the health care system.

“When I say the pandemic is growing in our region I don’t just mean cases and test positivity, which are certainly among the highest in the country, I mean that we are now seeing one of our major hospitals experiencing a huge covid surge. William Osler Health System is at capacity right now. They’ve had to transfer patients out because they can’t necessarily serve all the patients there because they have over 100-plus confirmed and probable cases in the hospital,” he said.

On Saturday, Peel moved to the province’s red “control” category, which allows most businesses to reopen but caps indoor capacity at bars, restaurants, gyms, and casinos to only 10 people.

The region was initially going to be placed in the more lenient orange “restrict” category but due to rising infections and the climbing positivity rate the province announced on Friday that Peel will be in the red zone.

The region recorded 104 new infections for every 100,000 people over the last week, which is above the 100-infection per capita benchmark listed among the province’s indicators for moving regions into the red category.

Loh added that the goal of the restrictions is to also avoid entering the grey “lockdown” category.

“It’s time to actually limit close contact to people in your immediate household and your essential supports and then for every other interaction outside of it try to only meet for essential reasons and make sure you’re taking precautions when you do it.”

Don't Miss it Delhi Reports 7,745 Coronavirus Cases, Biggest One-Day Spike
Up Next US coronavirus: The country has hit the highest daily number of new cases since the pandemic began