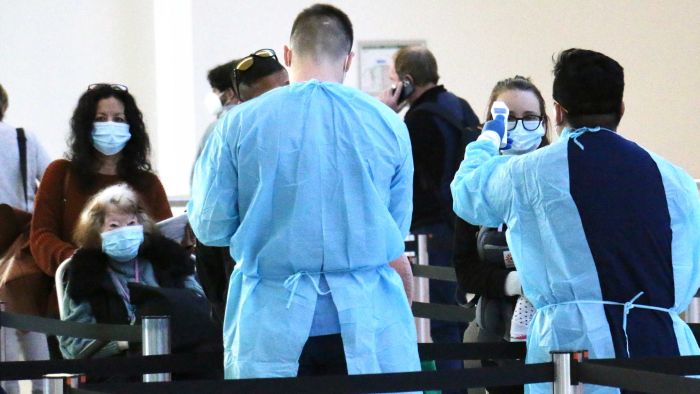 Travellers have been warned of the potential for significant delays at Perth Airport from this weekend as police brace for the prospect of being “overwhelmed” by thousands of extra interstate passengers when WA’s hard border is relaxed.

From this Saturday, November 14, Western Australia’s border restrictions will ease so that only people travelling from New South Wales and Victoria will be required to complete 14 days’ quarantine.

But anyone arriving in WA will still be required to electronically register their travel arrangements and answer a series of questions via the “G2G PASS” app.

Passengers will also be subjected to temperature checks on arrival.

Premier Mark McGowan is easing WA’s hard border with other states. Here’s what that means for you.

WA Police Commissioner Chris Dawson said if passengers did not complete their electronic travel registration before arriving at Perth Airport, they would have to be processed manually, something that would create “long queues and congestion.”

“If you’re traveling, get online, get your G2G PASS application sorted before you get on the plane,” he told ABC Radio Perth.

“I don’t want police and/or health [authorities] to be overwhelmed by people’s inability to plan ahead.”

But the G2G PASS app has not yet been updated to accommodate the change in border arrangements and registration requirements for interstate travellers.

He said the updated app would require travellers from Queensland, Tasmania, South Australia, the Northern Territory and the Australian Capital Territory to disclose whether they had been to Victoria or New South Wales, had knowingly mixed with anyone from those states or had been unwell.

Catch up on the main COVID-19 news from November 10 in our coronavirus blog.Passenger numbers set to ‘at least double’

Perth Airport said at this stage only two flights were due to arrive in Perth on November 14, one from Sydney and one from Brisbane.

Did you know we offer a local version of the ABC News homepage? Watch below to see how you can set yours, and get more WA content.

(Hint: You’ll have to go back to the home page to do this)

But it said the full schedule of flights for subsequent days would not be finalised until later this week.

Commissioner Dawson said police were expecting the number of passengers through Perth Airport to “at least double” once the border restrictions were eased.

Low-airfare carrier Jetstar will also recommence flights from Perth for the first time since March, with services to Cairns and Adelaide starting in the last week of November.

Virgin Australia said it was adding extra flights between Adelaide-Perth and Brisbane-Perth from November 22.

By mid-December, twice-daily services would be operating on the Brisbane-Perth route, with daily services between Adelaide-Perth.

The WA Health Minister Roger Cook said it was encouraging to see both states record consecutive days of zero cases.

Restrictions in Melbourne and across Victoria have been eased significantly.(ABC News: Billy Draper)

But he said the WA Government was still monitoring how they were managing the easing of restrictions, as well as a number of mystery cases in New South Wales.

“The efforts of the Victorian Government to get this second wave under control are extraordinary and they’re to be absolutely congratulated,” he said.

Don't Miss it US election results live: Latest Biden updates as he speaks about coronavirus
Up Next Europe making progress, locking down in fight against coronavirus