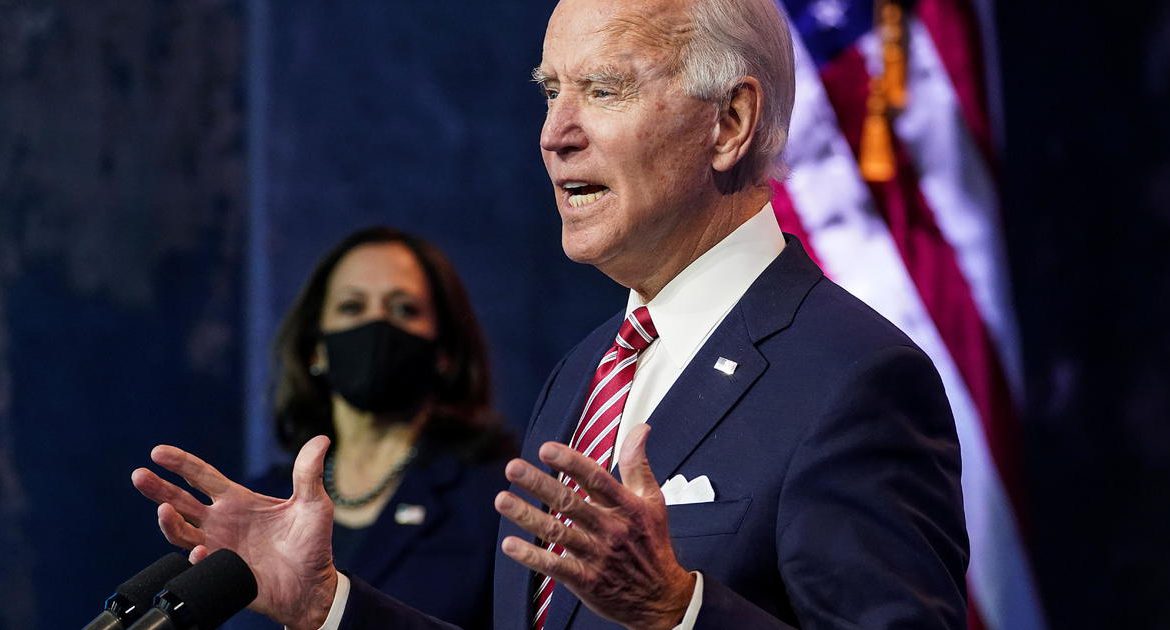 Washington — President-elect Joe Biden issued an urgent plea Monday for Democrats and Republicans on Capitol Hill to set aside their policy differences and reach consensus on a coronavirus relief bill as the nation braces for a “very dark winter” with coronavirus infections skyrocketing.

“The refusal of Democrats and Republicans to cooperate with one another is not due to some mysterious force beyond our control,” Mr. Biden said in remarks on the economy after meeting with business and labor leaders. “It’s a conscious decision. It’s a choice that we make.”

Mr. Biden said the American people are desperate for elected officials in both parties to “cooperate” and “deliver results” that alleviate the economic pain wrought by the pandemic, and called for Congress to “come together and pass a COVID-relief package” such as the Heroes Act, a $3 trillion package passed by the House in May. The measure, however, is a nonstarter in the GOP-led Senate, where Republicans are at an impasse with their Democratic colleagues on the size and scope of the next economic relief bill.

Mr. Biden underscored the need for Congress to provide federal aid to state and local governments, many of which are facing budget shortfalls due to a sharp decline in revenues because of the coronavirus crisis, and warned continued inaction could lead to layoffs of emergency workers.

“The idea the president is still playing golf and not doing anything about it is beyond my comprehension,” the president-elect said. “What is he doing?”

The president-elect’s remarks on his economic agenda followed a remote briefing in Wilmington, Delaware, and came as the stock market surged on news that Moderna’s coronavirus vaccine has been shown to be nearly 95% effective.

While Mr. Biden praised the efforts of Moderna and Pfizer, which announced last week that human trials suggest its coronavirus vaccine is 90% effective, he reiterated his calls for Americans to adhere to social distancing guidelines and wear masks.

“We’re going into a very dark winter,” he said. “Things are going to get much tougher before they get easier.”

In the days after he was projected to be the winner of the presidential election, Mr. Biden announced a COVID-19 advisory board comprised of doctors and scientists, which will create a blueprint for tackling the pandemic once his administration is in office. But Mr. Biden said his team needs access to the Trump administration’s plans for distributing a coronavirus vaccine, which he called a “huge undertaking,” in order to be fully prepared to address the pandemic once in office.

“If we have to wait until January 20 to start that planning, it puts us behind over a month, month and a half,” he said. “So it’s important there be coordination now, now or as rapidly as we can get that done.”

While the president-elect is moving forward with his transition to take over the White House, Mr. Trump has yet to concede the election, and the General Services Administration has not yet ascertained Mr. Biden as the likely winner, keeping his team from accessing federal funding, resources and agency staff.

The president-elect said he has spoken with some Republicans and hopes the president “will be mildly more enlightened before we get to January 20.”

“I find this more embarrassing for the country than debilitating for my ability to get started,” Mr. Biden said of the president’s decision not to concede the election.

The president-elect also delivered a message to Republicans who continue to defend Mr. Trump.

“I will work with you,” he said. “I understand a lot of your reluctance because of the way the president operates.”

Delivering remarks before Mr. Biden, Vice President-elect Kamala Harris said she and the president-elect had an “important conversation” about the impact of the coronavirus pandemic on workers with the nation’s leading business and labor leaders.

“Now is where the real work begins — the necessary work, the good work of getting this virus under control,” Harris said.

The vice president-elect acknowledged the coming months will be difficult as the nation experiences a surge in coronavirus cases, but said she and Mr. Biden are “hitting the ground running.”

“We all know the challenges facing America today are great,” she said. “The American people deserve no less, and we don’t have a moment to waste.”

In the lead-up to his speech, Mr. Biden’s transition office said he would discuss how to ensure “our workers and businesses can operate safely and rebuilding our economy to be more resilient and inclusive” and “how our economy and the virus are intertwined.”

The economic briefing included the following participants from the private sector and labor unions, all of whom indicated they are “ready to come together” and “sang from the same hymnal,” Mr. Biden said:

Don't Miss it More COVID-19 restrictions in store for Toronto within days, mayor says
Up Next Boris Johnson accused of "treating public with contempt" after backing Dominic Cummings – BBC News