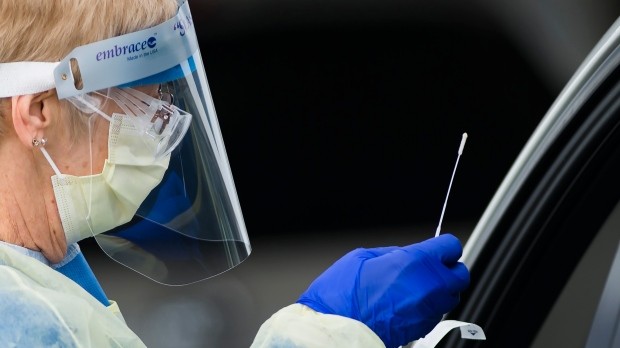 HALIFAX —
New Brunswick reported four new cases of COVID-19 on Tuesday, bumping the number of active cases up to 32.

According to the province, three of the new cases are in the Moncton region (Zone 1), and include:

two people in their 20s

one person in their 30s

The remaining case was reported in Zone 3 (Fredericton region) in a person in their 20s.

All four cases are self-isolating and under investigation.

“While we have an increasing number of cases in New Brunswick, jurisdictions all around us are facing lockdowns and record numbers of daily cases,” said Dr. Jennifer Russell, the province’s chief medical officer of health, in a statement.

“If we are diligent about following Public Health measures, getting tested, wearing our masks, spending more time outdoors, limiting our attendance and hosting of gatherings, keeping our close contact numbers as low as possible, we can substantially reduce our risk of experiencing what is happening outside of the Atlantic bubble,” continued Russell.

On Monday, New Brunswick identified eight new cases of the virus — six in the Moncton region and two in the Fredericton region.

Medical health officers in all three Maritime provinces are advising residents to limit travel outside the Atlantic bubble and there is even some concern about travel within the bubble.

In New Brunswick, the Russell says everyone should be monitoring their movements.

“In light of the fact that the risks are increasing all around the outside of the Atlantic bubble, I think it’s really important right now that people understand that the risk of travel related cases is going to continue to be there and in fact it probably will grow,” said Russell.

Prince Edward Island is tightening its screening at all its entry points and Dr. Heather Morrison is keeping a close eye on the numbers within the Atlantic region.

“A bubble, by its very nature, is fragile and we’ve all appreciated that,” said Morrison “I’ll be speaking with my counterparts in Atlantic Canada later this afternoon on our regular call; I know the premiers will be having similar conversations.”

The island has already started planning for the Christmas. Anyone travelling outside the bubble has to apply for re-entry by Dec. 1 and Russell is also concerned about the risk from holiday get-togethers.

“We’re certainly all concerned that the holiday season is going to bring in more cases,” Russell said. “We’re all worried about that, and I think that’s why we all want the message to be, it’s a pandemic. Unnecessary, unessential travel is not recommended at this point in time.”

Public Health has identified a potential exposure to COVID-19 at two locations:

the Fit For Less gym on Main Street in Moncton from Nov. 6 to 12.

the Tandoori Zaika Cuisine and Bar at 196 Robinson Street in Moncton. People who visited the business between the hours of 1 a.m. and 2 a.m. on Nov. 8 are urged to monitor for symptoms for 14 days.

Anyone who develops symptoms should self-isolate and take the online assessment.

New Brunswick has 379 confirmed cases of COVID-19. Of those, 341 cases have recovered. There have been six deaths, leaving 32 active cases in the province.

There is currently no one in hospital as a result of COVID-19.

The number of cases are broken down by New Brunswick’s seven health zones:

On Monday, Brunswick Health also announced the completion of its COVID-19 swish and gargle test method for children, which is now available at all assessment centres across the province.

Health officials say the new method is for children between the ages of four and 11. They can simply swish, gargle and spit some sterile salt water or saline solution into a tube instead of getting a nasopharyngeal swab.

“Although the nose swab is the recommended standard test for all New Brunswickers, the swish and gargle is available for children who are unable to receive the nasopharyngeal swab,” said Russell.

“Parents and children are encouraged to watch a video of what to expect and practise how to swish and gargle before the test is done at the assessment site.”

On Monday, 1,641 personal and 1,137 commercial vehicles attempted to cross the border into the province.

Of the vehicles attempting to cross the border, 21 were refused entry, for a refusal rate of 0.8 per cent.