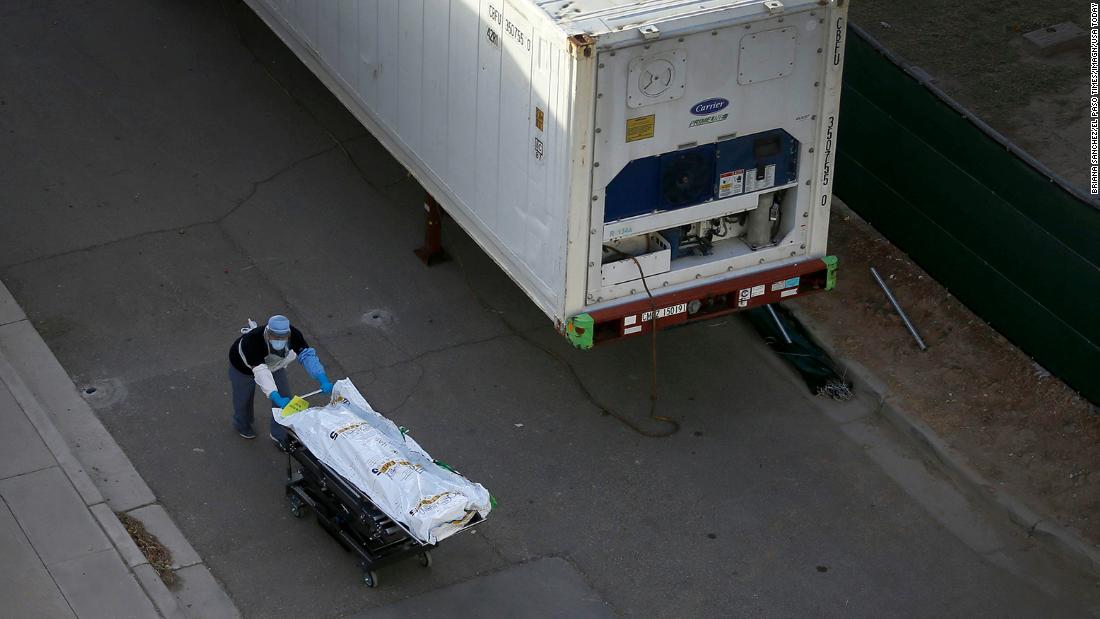 The coming weeks are likely to continue getting worse, before a possible vaccine begins to offer some relief. But just how much worse things will get depends on the mitigation steps taken across the country — as well as the kinds of celebrations Americans will opt to host over the coming days, experts say.

Many seemed to heed the warnings: New poll results released Tuesday by Axios-Ipsos shows about 61% of Americans have changed their Thanksgiving plans. Among the most common changes were deciding to see only immediate household members and having a smaller family dinner than originally planned, according to the poll. Nearly one in 10 Americans say they no longer plan to celebrate the holiday at all.

But others still chose to fly ahead of Thanksgiving, with more than one million travelers passing through security at the country’s airports on Sunday alone, according to the Transportation Security Administration.

“One of the ways we think the Midwest was seeded with virus over the summer was with the Sturgis, South Dakota, motorcycle rally, where people were infected and then dispersed out through the Midwest. Now imagine that on a massive scale, with people leaving from every airport in the United States and carrying virus with them,” he said.

And a negative test result isn’t enough, leading officials have warned. Assistant secretary for health at the Department of Health and Human Services Adm. Brett Giroir said Tuesday tests can return false positive or false negative results and aren’t always an indication of whether someone is infected at that current moment.

“A test that’s negative today doesn’t mean you’re going to be negative tomorrow or the next day,” he said. “It is certainly not wrong to get a test before you travel because if you are positive, you need to stay home, no questions asked. But if you do get a negative test, it doesn’t give you a free pass.”

As grim as the current numbers may seem, local leaders and officials throughout the country are projecting an even harder next few weeks.

In Colorado, more people are now infectious with the virus than at any other point in the pandemic, Gov. Jared Polis said, declaring the state is at “the height of infection.”

On its current trajectory, Colorado is forecast to more than double its current death toll of more than 2,800 to about 6,600 by the end of this year. That’s as hospitals are already filling up, reporting nearly double the daily number of new patients the state saw in the spring, Polis said.

In Denver, about 25 intensive care unit beds remain available for patients while only 14 remain in Colorado Springs, he added.

In California, another bleak projection. The state’s top health official said Tuesday California is also amid a surge, cases are growing faster and ever, and he expects to see deaths climb and the hospital system pressed like never before.

Hospitalizations have jumped by more than 81% in two weeks, California Health and Human Services Secretary Dr. Mark Ghaly announced Tuesday, while ICU admissions have increased about 57% during the same time frame.

“I think that certainly the numbers of deaths will likely go up … just as we are exceeding our highest ever numbers of cases and beginning to see our hospital systems pressed with Covid beyond where they’ve ever been pressed before, (the) idea that the number of deaths could exceed where we’ve been before is also indeed real and true,” Ghaly said.

And in New York, Gov. Andrew Cuomo said Tuesday the state was on track to see “a major spike,” with hospitalization rates increasing by 128% over the past three weeks.

More restrictions were announced in Nashville this week, where Mayor John Cooper said restaurants and bars will be limited to a maximum of 50% capacity, with social distancing.

Additionally, there will be a 10 p.m. last call and service for food and beverages and no entry to establishments after that time. The new limits will go into effect on November 30.

“The additional modifications are being made in response to the continued spike in COVID cases and concerns about hospital capacity,” Cooper wrote on Twitter.

In the hard-hit Texas community of El Paso, County Judge Ricardo Samaniego announced Tuesday a partial curfew that would work to address social and recreational activities but does not apply when residents are out for essential or nonessential business. The curfew will run from 10 p.m. to 5 a.m. and will expire Monday.

“You will be able to be purchasing, shopping, whatever it is that you need to do of any essential or nonessential businesses under the conditions that are placed,” he said. “We’re trying to create a balance on the health of our community and the economy.”

“But let me emphasize the following,” the judge said. “It is a shelter at home order. Residents are strongly urged to shelter at home. If leaving home to obtain essential or nonessential service, this order strongly recommends that only one person per family participate in obtaining goods and services.”

In Louisiana, Gov. John Bel Edwards announced the state was stepping back to Phase 2 starting Wednesday, amid an “aggressive third surge of COVID-19.” Under the restrictions, restaurants, gyms, barber shops, nail salons, movie theaters and nonessential businesses are limited to 50% capacity.

“There is not a single region of our state that is not seeing increases in new cases, hospitalizations and growing positivity of COVID tests, and I am incredibly concerned by Louisiana’s trajectory and our ability to continue to deliver health care to our people if our hospitals are overrun with sick patients,” Edwards said in a statement.

“Now is the time to make changes,” he added.

Meanwhile in Connecticut, the governor on Tuesday announced he has signed an executive order increasing the maximum fines for businesses that violate Covid-19 rules to $10,000. The previous maximum penalty was $500.

“While the overwhelming majority of businesses in Connecticut have shown an incredible amount of leadership and have been fantastic partners in this front, we have seen a small number of businesses in flagrant violation of these public health rules,” Gov. Ned Lamont said in a statement. “That’s all you need to cause a superspreading event that leads to a large number of cases and hospitalizations.”

While no vaccine candidate has gotten the green light from FDA yet, preparations to receive and distribute Pfizer’s Covid-19 vaccine have begun at the Jackson Health System in Miami, Florida, according to Dr. Lilian Abbo, chief of infection prevention and control at the system.

“Jackson Health System is one of five hospitals in the state and the only one in Miami who will get the vaccine in the first phase,” Abbo told CNN.

“We will be starting with health care workers, and people that are at high risk, frontline providers, following the guidelines from the health department and the state,” she said.

Ohio Gov. Mike DeWine said he received news from the White House that the state, along with others, will likely receive their first batch of vaccines around mid-December. He said his office hasn’t been given exact numbers of vaccines that the state would be receiving but said that health care workers and anybody who is in direct contact with Covid-19 patients will be prioritized to first receive the vaccine.

But there is still an important process ahead before a Covid-19 vaccine could potentially get that green light, FDA commissioner Dr. Stephen Hahn, said Tuesday.

“Our scientists are going to pour over the data — and remember, this is a study of over 44,000 individuals — so we’re going to look at all the patient data and be very careful about number crunching to make sure that we agree with the conclusion regarding safety and efficacy,” Hahn told South Carolina Sen. Tim Scott in an interview posted to Instagram.

The FDA’s Vaccines and Related Biological Products Advisory Committee will meet December 10 to discuss the data. Hahn said the public will be able to watch the meeting virtually, and a summary of the data will be available online.

“That committee is going to report back to us, and then after we hear their recommendations, we’re going to move forward,” he said.

“We’re going to use that process for every other application that comes forward, no matter what,” he added.

Don't Miss it B.C. negotiates COVID-19 vaccine rollout as Canada waits behind other countries
Up Next How Ukraine’s health care system is struggeling with COVID-19 | Coronavirus Update