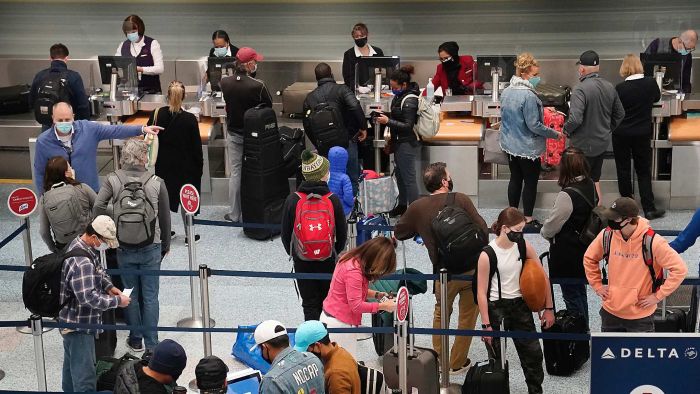 No matter what metric you use to measure it, the US is being swallowed by another wave, comparable in size and shape to the initial COVID-19 tsunami that caught the country off-guard.

States are tightening restrictions again, relying on the same mechanisms they have, on and off, for nine months.

The media’s gaze is shifting away from an election that won’t seem to end, writing headlines that rely on the same frantic messaging we’ve seen since March.

The country is reverting to familiar motions — the same ones that completely upended daily life without stopping a quarter of a million people from dying.

Catch up on the main COVID-19 news from November 26 with our coronavirus blog.

And now, suddenly, Thanksgiving is here to do what holidays do best, which is invite one to break routine through the comfort of a ritual.

The problem is that gathering is central to Thanksgiving tradition

Of all the holidays on the US calendar, Thanksgiving and its premise are proving the most resistant to pandemic compromises.

Easter’s brunches could be cancelled for the sake of what felt like a temporary crisis.

Independence Day’s barbecues could be shrunk, spaced out, shared by neighbours rather than out-of-state guests.

Many states cancelled their usual fireworks displays and closed down beaches to prevent large crowds gathering in public on Independence Day.(Reuters: Carlos Barria)

Halloween could be celebrated with costumes and candy, its joy spread through photos rather than physical proximity.

Something about Thanksgiving has always been stubbornly more social and solemn than other holidays.

Perched on the edge of winter, it’s a time to reflect, take stock, prepare for the season ahead.

This week the US recorded the highest one-day coronavirus death toll the country has reported since early May.(Reuters: Daniel Acker)

And as a precious public holiday, it’s a break from school or work for most Americans.

More than anything, Thanksgiving is about gathering, in person, in the warmth of a home, with real or symbolic family, to do a thing you can’t possibly do while wearing a mask.

The running joke of it all is how many people at the table don’t even like the food.

After nine months of pandemic life, we’ve been conditioned to making difficult decisions about when to compromise or cancel the events that promise normalcy.

We tend only to hear about the Americans who make those decisions loudly (like the armed anti-lockdown protesters), or making the decisions poorly (like the 62 wedding-goers in Maine who spread at least 178 cases).

What we’re about to see take place is what happens when an entire country’s worth of people, with a range of beliefs, have to decide at the same time.

The Centers for Disease Control has bluntly asked Americans not to travel for Thanksgiving, while the nation’s top disease expert, Anthony Fauci, asked Americans to keep their gatherings as small as possible.

The president-elect and the sitting President doled out conflicting messages.

Joe Biden delivered remarks on the eve of the holiday to urge Americans to follow the experts’ advice.

Biden told Americans “we’re at war with a virus, not with one another” in his speech for the Thanksgiving holiday.(AP: Carolyn Kaster)

“I know how hard it is to forego family traditions, but it’s so very important,” he said.

“Every one of them is based on science, real science.”

It was only the day before that Donald Trump went full steam ahead with his own presidential tradition, conducting the turkey-pardoning ceremony in the Rose Garden with plenty of guests and few masks.

He thanked healthcare workers and touted the strength of the US economy, but didn’t offer advice on how to celebrate the holiday safely.

Donald Trump continued the annual tradition of pardoning the National Thanksgiving Turkey this year.(Reuters: Hannah McKay)Americans say they plan to stay home, but the photos tell a different story

A survey commissioned by the New York Times found that only about 27 per cent of Americans said they planned to spend Thanksgiving with someone outside their household.

But it was hard to square those numbers with the images circulating on social media: flight maps bursting with bright yellow icons, terminals devoid of social distancing, lines for free testing sites twisting around city blocks.

More than 3 million Americans packed into airports this week for Thanksgiving travel.

It’s less than half of the plane traffic that transit hubs normally see, but it’s still the highest number of travellers since the country closed down in mid-March.

Another 47.8 million were expected to drive to gatherings according to a mid-October survey from the American automotive association, but that number could have dropped as warnings increased.

Figures like this caused even the New York Times to question whether the 27 per cent figure from its survey was accurate.

One theory is that those surveyed understood the risks of their behaviour enough to be dishonest about their plans, fudging the truth to save themselves from moral judgment.

It’s also possible that they took the broadest possible definition of “household,” thinking that close family and friends — regardless of where they live — are right to be an exception.

Reconciling one’s personal desires with collective responsibility is a heavy mental load, one that’s only proved harder to carry as time drags on, cases increase and fatigue sets in.

The celebrations will be marked by compromise and difficult conversations

Thanksgiving has complicated America’s decision-making calculus by centring on the people they care about most.

Family plans aren’t made by any one individual. The conversations have a way of blowing up to be bigger than coronavirus.

Telling your parents or grandparents or aunts or uncles that you won’t come home this year is like telling them that you’re not ready for them to be gone forever.

Telling your child or grandchildren or nieces or nephews that you don’t want them to join your plans can read like a moral judgment of their behaviour.

And most conversations will involve some level of debate around the facts, which are hard to agree on in a country where trust in science is low, the media are viewed as biased and partisanship is among the top predictors of health behaviours.

For some Americans — even ones that believe fully in the science and threat of the virus — the allure of a normal holiday during a stressful year will be too strong a magnet to avoid.

But for what the surveys and articles suggest is the majority of Americans, Thanksgiving will be an extension of what they’ve been asked to do for the last nine months: compromise.

They’re slimming their guest lists, moving to virtual gatherings, opting for a picnic, dining on back patios in the cold, sitting in separate rooms, sharing food through windows, getting tested, self-quarantining, and generally charting their own course, doing whatever it takes for them to feel OK.

None of this will guarantee that Americans won’t see empty chairs at the next Thanksgiving dinner. Compromise hasn’t prevented 260,000 American deaths.

But with a vaccine on the way, it might provide a reason to dig in a little deeper, to keep fighting a little longer, to get back to a place where holiday traditions aren’t such a drastic marker of change.

Don't Miss it Doctor who ‘saw death and returned’, to serve at Covid-19 ICU
Up Next Donald Trump Jr. says he is ‘all done with the Rona’ and ends his COVID-19 isolation to celebrate Thanksgiving days after announcing his positive test