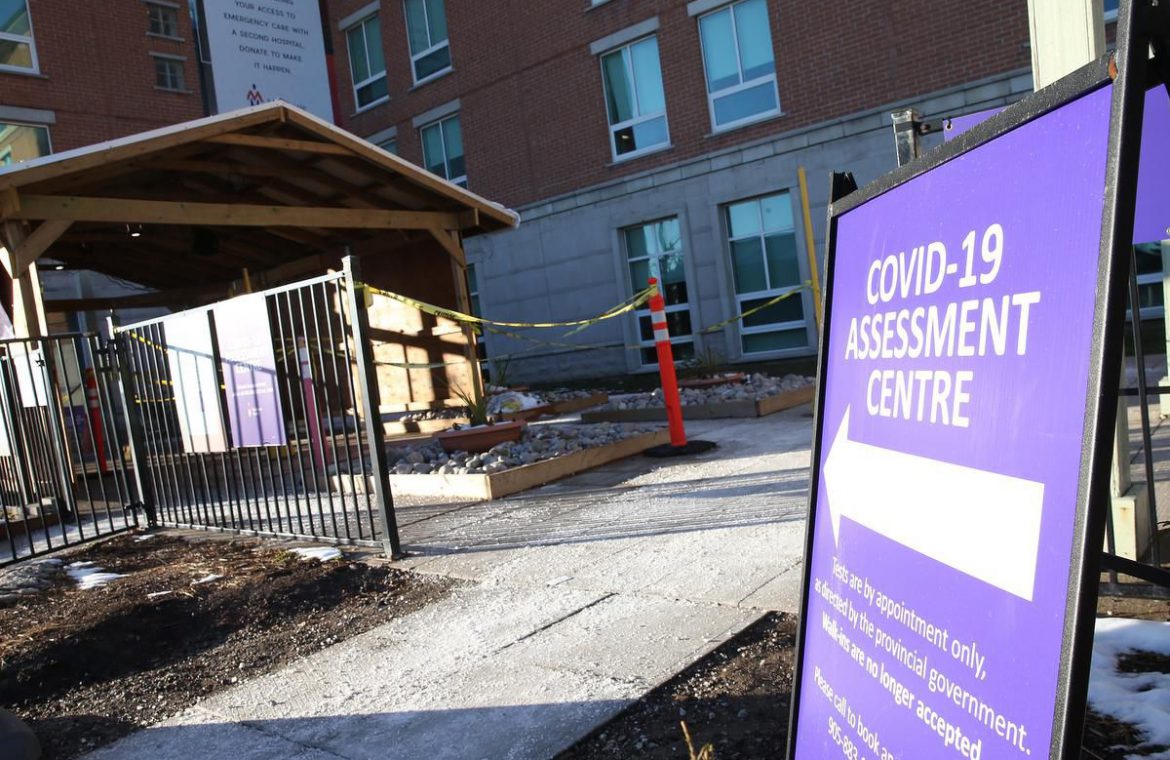 Two weeks after York Region managed to avoid being locked down like its neighbouring municipalities, COVID-19 cases continue to climb with local hospitals above or nearing capacity and some areas seeing startling numbers of people testing positive. But the region has yet to sound the alarm.

York’s current infection rate of 111 cases per 100,000 population per week is higher than what Toronto was reporting on the day it entered lockdown, Nov. 23, according to the Star’s ongoing tally. The region logged 202 new COVID-19 infections on Dec. 2 and has a test positivity rate of 6.29 per cent, which is above the rate Toronto reported the week leading up to its lockdown.

As well, new data released Wednesday by the Toronto-based non-profit ICES (formerly the Institute for Clinical Evaluative Sciences) revealed an area within York Region that borders Brampton has a test positivity rate of 20.4 per cent — the second highest in the province.

York Region’s associate medical officer of health, Dr. Alanna Fitzgerald-Husek, said the thresholds are being monitored closely, but stayed away from saying the region was closer to a complete lockdown.

“The numbers are concerning and it is something we are monitoring,” she said. “The overall numbers and the curve going up is a concern, but what is really important to us is unpacking that curve and understanding where that burden is.”

On Nov. 20, the province announced Peel and Toronto were going into a lockdown, including a shutdown of non-essential retail, to help curb climbing rates of COVID-19. York, despite its consistently high numbers, managed to stay in the red-control zone, which allowed its businesses to stay open with reduced numbers, and limits on gatherings.

Fitzgerald-Husek said the situation in Peel and Toronto was “markedly different” in that they had consistently higher numbers and rates of cases a few weeks back compared to York. She said that while the region’s numbers have gone up, it is “still managing with contact tracing,” a key component of the public health response.

“We do have a good public health capacity; we are reaching our positive cases within 24 hours,” she said. “Our incidence rates are a bit higher, so that is something we are monitoring closely. We have been in the red-control zone for a couple of days and we are looking to see if the current trajectory is going down, as it takes about 10 to 12 days before (cases) decline.”

She said the data is being closely monitored, and a “sustained large change” could prompt a lockdown.

Ashleigh Tuite, an epidemiologist at the University of Toronto, said it’s already clear the red-control measures have not worked to “bend the curve” in York.

“There’s no reason to expect that cases are going to start declining on their own without some additional measures in place,” she said. “It’s the just the way communicable disease spread works; you have to change something if you want to change that trajectory.”

According to the ICES data that covers the last full week of November, six areas in York Region had test positivity rates higher than six per cent. Among them was an area that borders Brampton and includes Kleinburg that was the second highest in the province, with a 20 per cent positivity rate.

Fitzgerald-Husek said officials are closely watching all public health metrics, including hospital and health-care capacity in the region.

Markham Stouffville Hospital is operating above 100 per cent capacity and staff are using every available space to care for patients, said president and CEO Jo-anne Marr, noting the hospital is so far able to keep up with almost all its pre-COVID hospital services while catching up on a backlog of diagnostic procedures from the first wave.

In the past month, the hospital has seen a slow but steady increase in the number of admitted COVID-19 patients and is currently caring for 15 COVID-positive patients and 25 who are awaiting test results, she said. The test positivity rate at its assessment centre has fluctuated around 10 per cent in recent weeks, though a hospital spokesperson said it “is not a reflection of the rate in York Region because we are seeing many patients coming to the centre from areas across the GTA.”

Marr said she and the other hospital CEOs in York Region speak regularly with public health officials, and while the hospital is “under extreme pressures” it is so far managing.

“I do know that the capacity within York Region Public Health has been relatively strong … I think that has helped the region to avoid — at least to date — the lockdown.”

Mackenzie Richmond Hill Hospital is nearing capacity and is caring for 34 patients with suspected COVID-19 and 24 confirmed COVID-positive patients, 10 of whom are in intensive care.

“That’s been our saving grace in terms of our critical care, because we’re well above the baseline 30 beds that we had prior to this investment.”

Wilson said the challenge for hospitals during the fall wave is they are managing COVID-19 activities, including caring for critically ill COVID patients, running assessment centres and providing support to long-term-care homes, all while maintaining regular hospital services.

Wilson said the hospital has plans for a second dedicated COVID-19 unit, should the need arise.

Local politicians, meanwhile, are optimistic that stricter enforcement measures that have been put into place beyond provincial controls will help control COVID-19 case numbers, especially as people from nearby municipalities have recently been flocking to York Region malls for seasonal shopping.

Markham Mayor Frank Scarpitti, who has been vocal about safety measures since the start of the pandemic, said Regional Council decided to stay in the red zone on the recommendation of the region’s medical office of health, Dr. Karim Kurji, to the province.

At the time, after the region had recently moved into the red-control zone, Kurji told council that businesses were largely compliant with the additional safety measures that had been put forth, and that hospitals in the region were managing demand.

“We had seen the red zone work in the past, so the thinking was let’s give this a bit more time,” he said.

Scarpitti said he supported the decision on the basis that the region increased enforcement of those who weren’t compliant with social distancing rules, and that the province or region would implement a refined red zone allowing for capacity restrictions and physical distancing within retail and big-box stores, and limitations for religious gatherings in banquet halls.

Scarpitti said that when the province did not change the rules, Kurji issued an order under Section 22 to apply these restrictions.

Over the weekend, the York Region COVID-19 enforcement task force was out conducting 1,039 inspections, laying 42 charges and was involved in 737 education and compliance activities. Among those charged were Promenade Mall, Dollarama, Longo’s and Costco. The majority of the fines are for $880 and range from a failure to maintain physical distancing to lack of mask wearing.

Noor Javed is a Toronto-based reporter covering current affairs in the York region for the Star. Follow her on Twitter: @njaved

Don't Miss it Coronavirus vaccine in India: AIIMS Delhi Director reveals timeline for emergency use authorisation for Covid-19 vaccines
Up Next Coronavirus Vaccine in New York: What to Know