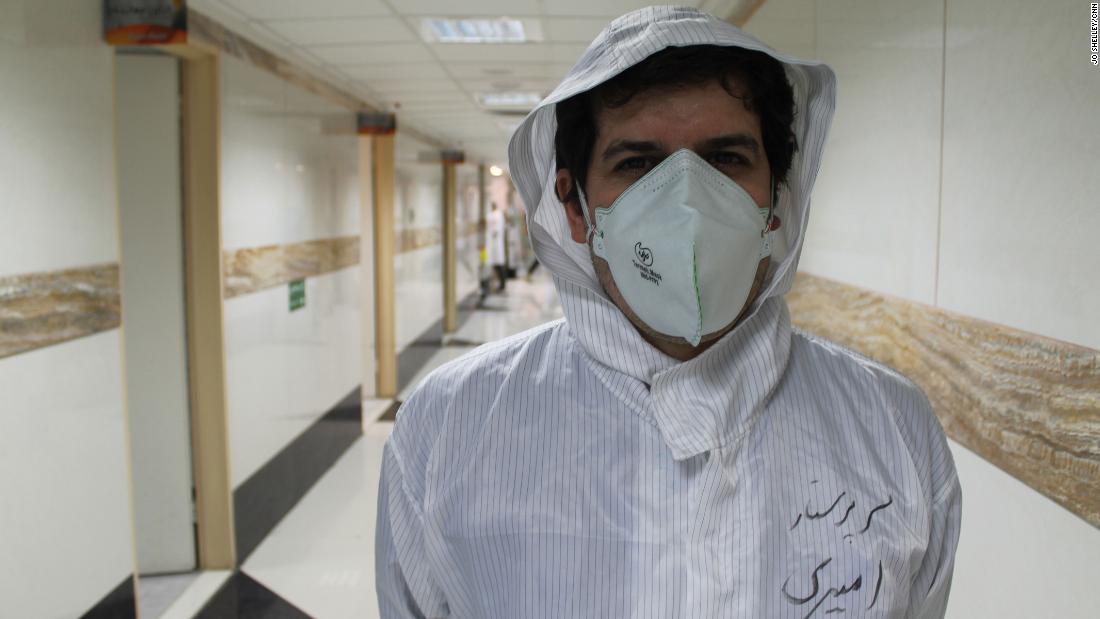 Inside, five patients are being valiantly kept alive, courtesy of a patchwork of equipment accrued over painful months that have seen over 750 deaths here. And with an enormous amount of commitment and ingenuity.

“The most worrying thing for a doctor is to know there are medicines (plentifully) available in some parts of the world but not here,” said Dr. Alireza Fatemi.

Retired teacher Khalif Farahani struggles to speak, but his emotions pierce the breathlessness of the virus’s impact on his lungs. “Sanctions, it is cruelty (from) America”, he said. He caught the virus on a park excursion, he added, but even in this condition is “better than before.”

The tube in his nose is a little worn, in keeping with so much of the equipment in the ward: painstakingly tended, but unmistakably the tools of a country cut off from the flourish in medicine, racing around the globe in the pandemic. The ICU is not sealed off from the rest of the ward.

Days here vary, said the doctors. Two dead is a good day, four average, and the worst they’ve had killed nine. Iran has passed two grim milestones in the last week: 50,000 dead on Saturday and a million recorded cases last week since the pandemic began. Numbers that tell part of a story, limited in its scope by the tests Iran is able to muster daily, thought to number about 60,000.

Yet even as their knowledge of home-generated solutions grow, this November was the cruelest month, with an official death toll of 10,000. The hospital’s dean, Reza Jalali Khoshnoud, blames the third spike, as Iranians now call it, on the need to keep the damaged economy afloat. “People had to go to work”, he said. “The risky businesses were allowed (to stay open), then after a few months we got a spike. The climax has been in the past month.”

The toll has been heaviest, month in, month out, on the staff. An estimated 300 medical workers have died nationwide since the pandemic began, Khoshnoud said. And those who survive carry the burden of what they’ve seen.

“The most bitter day was when I had a 47-year-old mother of three here,” said Aslan Amiri, the ICU’s chief nurse. “She didn’t respond to treatment. When she died that was the most terrible, bitter day for me. I could not save her. It stuck in my memory.”

The loss of younger parents also haunts another nurse, Elham Moazami. “I came from the other wards to help with Covid,” she said. “We tried our best to save a person with two young kids, aged just 32. But we failed. That was the most bitter day for all the staff here.”

Nurse Mitra Agharazi said: “Stress is part and parcel of nursing but (the) pandemic is something different — ten times greater. We are worried all the time we may contract the disease ourselves or give it to our friends or family. It is a heavy burden on our shoulders.”

Resistance — a word frequently invoked by Iran’s leadership — is the watchword here. Fatemi said domestic production of PPE and medicine has seen them through, yet sanctions mean they are always on the edge of a shortage. “We are now much better off than in the early months … If there were no sanctions, we could have backups of medicine and no worries about facing another wave of the pandemic.”

Though the sanctions technically exempt food and medical supplies, human rights reports from Iran have repeatedly emphasized the impact of sectoral sanctions on gaining access to essential medicines and medical equipment, including respirators and protective equipment for health-care workers. And experts say US sanctions on Iran are indeed hurting its response to the pandemic.

“Iran is hampered by sanctions that prevent it from accessing foreign reserves, foreign currency abroad to purchase the necessary medical equipment — masks, anything that it might need to take care of its population,” Sanam Vakil, an Iran expert with the UK think tank Chatham House, told CNN earlier this year.

The spaces for those who lose the fight are an hour across town. The uniform, tidy graves of the Behest-e-Zahra cemetery are swallowed in the reverberating and haunting chants of imams working overtime to pray for the endless stream of shrouded corpses.

The bodies come on the shoulders of family members, and two of the stories this afternoon are similar: in their late fifties, with diabetes, struck down with Covid-19. The scale of the task ahead of the gravediggers is chilling. One kneels, with a tape measure, allocating each space, to ensure both economy and scale.

The prayers from neighboring ceremonies overlap, and seem to loop in grief, almost drowning out the singular scream of a woman that would normally stop a crowd dead in its tracks. None of the funeral parties want to talk; many are overwhelmed.

The walls of the tombs are lined carefully with clay. Petals are laid on the floor. The ceremony is both meticulous and paced fast enough to fit the sheer volume of death in. The dozen imams have reported saying prayers 30 times a day. It is a startling scene, both in volume and pace, a stark reminder of the sanctions invoked without hesitation in Washington, yet that Iranians say have made a grief felt globally so much more savage here.