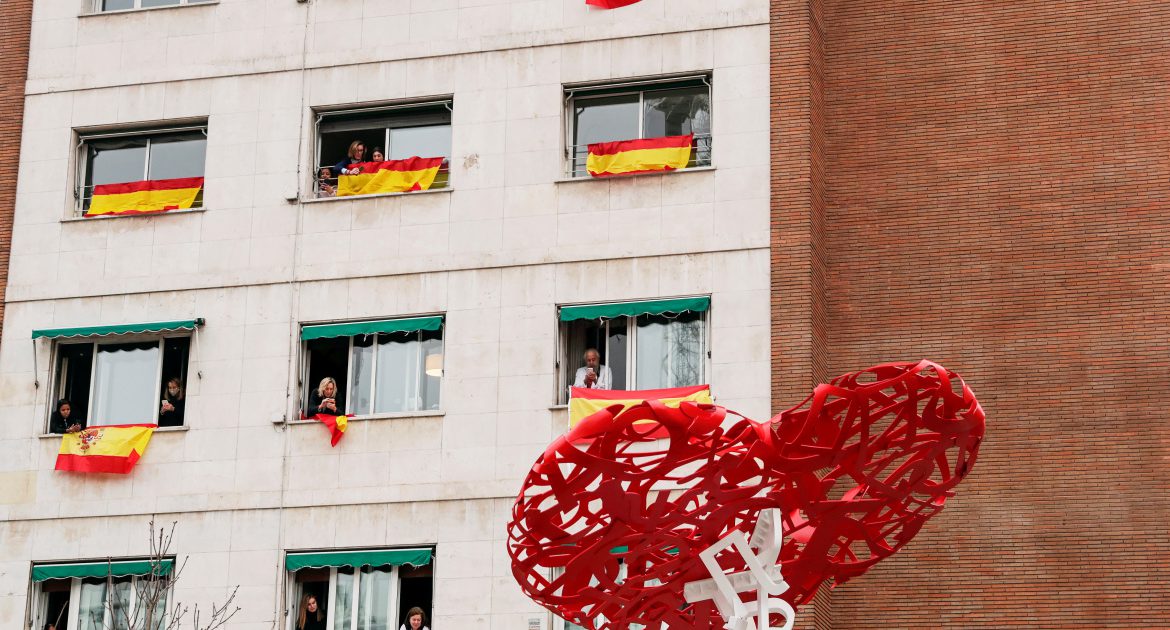 Spain and Greece are expecting to start COVID-19 vaccination on December 27 as EU Commission chief Ursula von der Leyen announced it was “Europe’s moment” in the battle against the virus.

The former president of Burundi, Pierre Buyoya, has died in Paris of COVID-19 at the age of 71, several close relatives told AFP news agency.

India is 20,000 cases short of reaching the 10-million mark as the country recorded over 22,800 new infections in the past 24 hours standing firm as the world’s second most affected state in the world after the United States.

Meanwhile in the US, an unrelenting coronavirus surge pushed besieged hospitals further to the brink as the country pressed on with its immunisation roll-out and prepared to ship nearly six million doses of a new vaccine following the reported emergency use approval of Moderna.

Spain will start immunising people against the coronavirus on December 27, a day after it receives the first doses of a vaccine, said the Health Minister Salvador Illa.

Greece’s Prime Minister Kyriakos Mitsotakis as well said that he is expecting the first batch of the vaccine to arrive in the country on December 26, thus to have the first inoculations the day after in five hospitals in Athens and then in Thessaloniki.

Both announcements came a day after European Commission chief Ursula von der Leyen announced that the EU would start Covid-19 jabs between December 27 and 29, saying it was “Europe’s moment” in the battle against the virus.

Spain’s Supreme Court ordered an investigation into the deaths of elderly people in nursing homes during the COVID-19 pandemic and the lack of protective gear for health workers.

Magistrates were asked to find out if deaths at nursing homes “were associated with political, administrative or management decisions and whether those decisions are criminally reproachable”.

Spain has been one of the European countries hardest-hit by the pandemic which has killed over 48,700 people.

A woman wearing a protective face mask walks past Christmas trees, amid the outbreak of the coronavirus disease (COVID-19), in Kyiv, Ukraine [Gleb Garanich/Reuters]Ukraine’s government expects that the first doses of vaccine against COVID-19 may arrive in the country in February, Prime Minister Denys Shmygal told parliament.

Separately, the Health Minister Maksym Stepanov said Ukraine wanted to resume production of its own vaccine candidate and a clinical trial was being prepared, without giving details.

Ukraine has yet to give official approval to any vaccine.

1 hour ago (10:26 GMT)
Austria to go into third lockdown after Christmas

Austria will go into a third coronavirus lockdown after Christmas that will last until January 18, according to several Austrian media outlets including national news agency APA.

The lockdown will last longer for those who do not get tested for the coronavirus, while those who test negative will be able to come out of lockdown, several outlets reported

International arrivals fell by over 70 percent throughout the first ten months of 2020, marking the worst year on record in the history of tourism, said the UN’s World Tourism Organization.

?The latest #UNWTO Barometer shows #tourism back to 1990 levels:

“Even as the news of a vaccine boosts traveller confidence, there is still a long road to recovery,” said UNWTO Secretary-General Zurab Pololikashvili.

“We thus need to step up our efforts to safely open borders while supporting tourism jobs and businesses,” he added.

For life to be back to “normal”, the French population will probably have to wait until autumn 2021, said a senior government scientific adviser.

“We have a virus which continues to circulate strongly while we are just coming out of a second lockdown,” immunologist Jean-François Delfraissy also told BFM television.

France reported another 18,254 new infections in the past 24 hours and its death toll is just under 60,000 [File: Christian Hartmann/Reuters]The health expert’s comments were made a day after President Emmanuel Macron tested positive to COVID-19 as the country is witnessing a rise in infections ahead of the Christmas holidays.

3 hours ago (09:02 GMT)
Thailand relaxes travel curbs for some countries

Thailand has eased travel restrictions for citizens from 56 countries in a bid to boost the country’s pandemic-hit tourism industry although visitors will be required to undergo a mandatory two-week hotel quarantine.

Thailand has eased travel restrictions for citizens from 56 countries [Mladen Antonov/AFP]Tourists from countries including Australia, France and the United States can travel without visas, but would need a certificate to show they were free of COVID-19 72 hours before travel and a reservation at a quarantine hotel, Taweesin Visanuyothin, a spokesman for Thailand’s COVID-19 task force said on Thursday.

Northern Ireland and Wales have both outlined plans to head back into lockdown after Christmas to control infection rates, raising suggestions that England might follow suit.

“Nothing is ruled out of course as we tackle this pandemic but the test system is a very effective way… to focus the restrictions,” Gibb told Sky News when questioned about a possible third English lockdown.

Asked to confirm that the government was not ruling out a post-Christmas lockdown, Gibb said: “That’s not what I said. We have a very effective tier system.”

Muslims in Sri Lanka are outraged over the forced cremation of a 20-day-old COVID-19 victim last week against the family’s wishes, the latest in more than a dozen such cremations in the Buddhist-majority country since the pandemic erupted.

Ignoring the WHO’s guidelines which permit both burials and cremations, Sri Lanka in March made cremation mandatory for people who die or are suspected to have died from the coronavirus infection.

Tunisia, Lebanon and Gaza reported more cases in the past 24 hours as they struggle to contain the outbreak.

A Palestinian man, wrapped in a plastic sheet as a preventive measure against COVID-19, sits in a car as he waits to leave Rafah border crossing with Egypt in the southern Gaza Strip [File: Ibraheem Abu Mustafa/Reuters]

India will produce about 300 million doses of Russia’s Sputnik V vaccines next year, a Russian official was quoted as saying, nearly three times the previously known number as deals have been signed with more manufacturers.

Russia is already testing the first samples of Sputnik V that were produced in India, its embassy in New Delhi said on Twitter.

#Russia is testing the first samples of its #SputnikV vaccine against #COVID19 that were produced in India – CEO of the @rdif_press Kirill Dmitriev.#Dmitriev: India will produce about 300 mln doses of the Russian @sputnikvaccine in 2021 https://t.co/vJ0owjKIHA pic.twitter.com/tUoyONVYJ4

India is the world’s biggest vaccine maker and its pharmaceutical industry is freeing up capacity and accelerating investments ahead of the global rush for COVID-19 shots.

“President Pierre Buyoya died last night in Paris. He had Covid-19,” said a member of his family, requesting anonymity.

Several other relatives confirmed the death of Buyoya, who served as special envoy of the African Union to Mali and the Sahel from 2012 until November this year.

Indonesia capital Jakarta is imposing a new round of restrictions starting from Friday to January 8.

According to the new regulations, restaurants, shopping malls, movie theatres and tourist sites must shut by 9pm (2pm GMT), while offices must slash their capacity by 50 percent and close by 7pm (12pm GMT).

Public transport will function until 8pm (1pm GMT) only.

Movements within the city will be monitored, with travellers entering or living the capital expected to show a negative result of a rapid antigen test, according to local media.

A small study on 16 pregnant women with COVID-19 found no evidence of virus transmission between the mother and the baby, shedding some light into a still unknown area.

The Singapore study also found that babies born to infected mothers have antibodies against the coronavirus.

The World Health Organization says pregnant women can be badly affected by some respiratory infections, and that it is not known whether mothers with COVID-19 can pass the virus to their babies during pregnancy or delivery.

A health worker in personal protective equipment checks the temperature of passengers at a railway station in Mumbai, India [Francis Mascarenhas/Reuters]India’s tally has almost passed 10 million as it reached 9,979,447 cases.

The country is getting close to pass the grim milestone as 22,890 new infections were registered during the past 24 hours, according to the latest data from the federal health ministry.

India has recorded the world’s second-highest number of infections behind the US, but numbers have dipped steadily since hitting a peak in September. Daily cases were below 30,000 for the fifth straight day on Friday.

China is preparing to vaccinate 50 million people before the start of the Lunar New Year travel season early next year.

Health experts from centers of disease control and prevention across the country were called for a training meeting on Wednesday to get ready for mass vaccination, the South China Morning Post reported.

The plan is to distribute 100 million doses of the two-dose inactivated vaccines made by Chinese firms Sinopharm and Sinovac Biotech Ltd, the SCMP said.

The number of confirmed coronavirus cases in Germany increased by 33,777 to 1,439,938, data from the Robert Koch Institute (RKI) for infectious diseases showed on Friday.

People queue to receive FFP2 masks for free at a pharmacy as a measure of protection, amid the coronavirus disease (COVID-19) pandemic during lockdown in Berlin, Germany [Fabrizio Bensch/Reuters]

South Korea reported 1,062 new coronavirus cases on Friday, its second-highest ever daily tally, as the government warned businesses it was unacceptable for them to try to dodge shut-down orders by tricking the system.

The daily number was above 1,000 for the third straight day for the first time, data from the Korea Disease Control and Prevention Agency (KDCA) showed.

The rash of new cases has shaken a country that has for months been held up as a mitigation success story. But despite its total tally rising to 47,515 infections, South Korea has only suffered 645 deaths.

While the government agonised over whether to tighten up social distancing, which would mean ordering 1.2 million business to suspend operations, Prime Minister Chung Sye-kyun said everyone had to play by the rules.

Australian states and territories on Friday begun imposing border restrictions after 28 COVID-19 cases were detected from a cluster on Sydney’s northern beaches, with fears the number of infections will rise.

Health authorities fear the cluster may have spread to other areas of Sydney, Australia’s most populous city, as they have yet to determine the source of the infections.

NSW has urged about a quarter of a million residents in the affected suburbs in Sydney to stay home for three days.