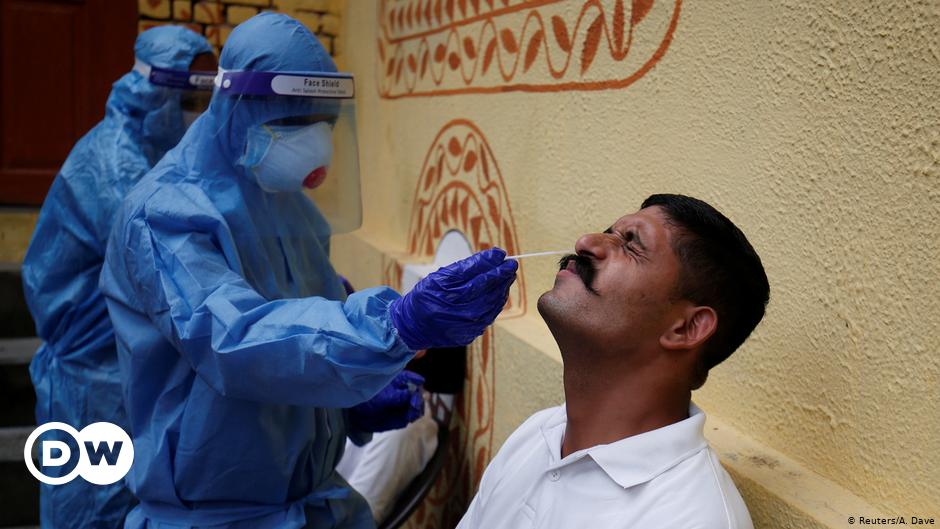 India became the second nation in the world to surge past 10 million coronavirus cases on Saturday, according to official data. The country reported over 25,000 infections in the last 24 hours. It has also reported 9.6 million recoveries and 145,136 deaths.

India’s daily infections have significantly declined since September when the country was reporting nearly 100,000 cases per day and was on the way to surpassing the United States as the worst-hit nation.

While the pandemic has been on a downward trend in India, the US saw a surge in infections, reporting more than 200,000 daily cases in recent weeks.

India’s milestone in COVID cases comes as the South Asian country prepares for the daunting task of vaccinating its population of 1.3 billion next year.

India is yet to approve any vaccine, but several companies have applied for authorization, including Oxford-AstraZeneca which has partnered with India’s Serum Institute, the world’s largest vaccine manufacturer.

Here’s DW’s overview of other major developments around the world.

The US Food and Drug Administration authorized Moderna’s COVID-19 vaccine for emergency use on Friday, a week after it approved BioNTech-Pfizer’s shot.

The vaccine will likely be used in harder-to-reach areas of the US due to the relative ease of storing its doses. This comes as the world’s hardest-hit nation grapples with more than 3,000 coronavirus deaths a day.

Panama is to reimpose nationwide curbs on movement by requiring men and women to carry out festive shopping on different days, the health minister said on Friday.

“As of Monday 21, with the aim of reducing mobility, purchases will be made by gender,” Luis Sucre, the Minister of Health, said in a televised message.

On Thursday, Panama reported 3,348 new cases and 42 deaths, a daily record for both new infections and deaths.

Germany has recorded a further 31,300 cases, taking the country’s overall tally to 1,471,238, data from the Robert Koch Institute (RKI) for infectious diseases showed on Saturday. The reported death toll rose by 702 to 25,640.

“Our experts fear that the infection curve will increase during the Christmas period,” Conte said

Under the new restrictions, shops, bars, and restaurants will be closed and travel between regions will be banned, and in theory, only one daily outside trip per household will be permitted.

Celebrations will be allowed until 10:00 pm.

The prime minister specified that the measures would be relaxed on December 28, 29, 30 as well as on January 4.

On these days, shops can remain open until 9:00 pm and people will be allowed to move about freely.

South Africa has detected a severe variant of the virus which could explain the rapid spread of a second wave that affects younger people, the health minister said Friday.

Known as the 501.V2 Variant, details have been sent to the World Health Organization, Zwelini Mkhize said in a statement.

Doctors have noticed that more coronavirus patients are younger, and do not always have other conditions that amplify the virus’ effect, but are nonetheless suffering from more severe forms of COVID-19.

That “strongly suggests that the current second wave we are experiencing is being driven by this new variant,” Mkhiz added.

The research team has alerted authorities in Britain, who have “studied their own samples and found that a similar mutation … was the variant that was driving their resurgence in London,” he said.

Parts of Sydney, Australia’s most populous city, was heading into a lockdown that officials hope would be enough to control a growing outbreak in time for Christmas.

Residents in the city’s northern beaches were ordered to stay home until midnight on Wednesday, except for essential reasons.

Hundreds of thousands of people in several suburbs after affected, with beaches, pubs and hotels closed starting Saturday evening.

“We’re hoping that will give us sufficient time to get on top of the virus so that we can then ease up for Christmas and the New Year,” said Gladys Berejiklian, the state premier of New South Wales of which Sydney is the capital.

Don't Miss it One of the biggest coronavirus outbreaks in Melbourne is at a school | 7.30
Up Next How the Australian Open will be held in the world of coronavirus