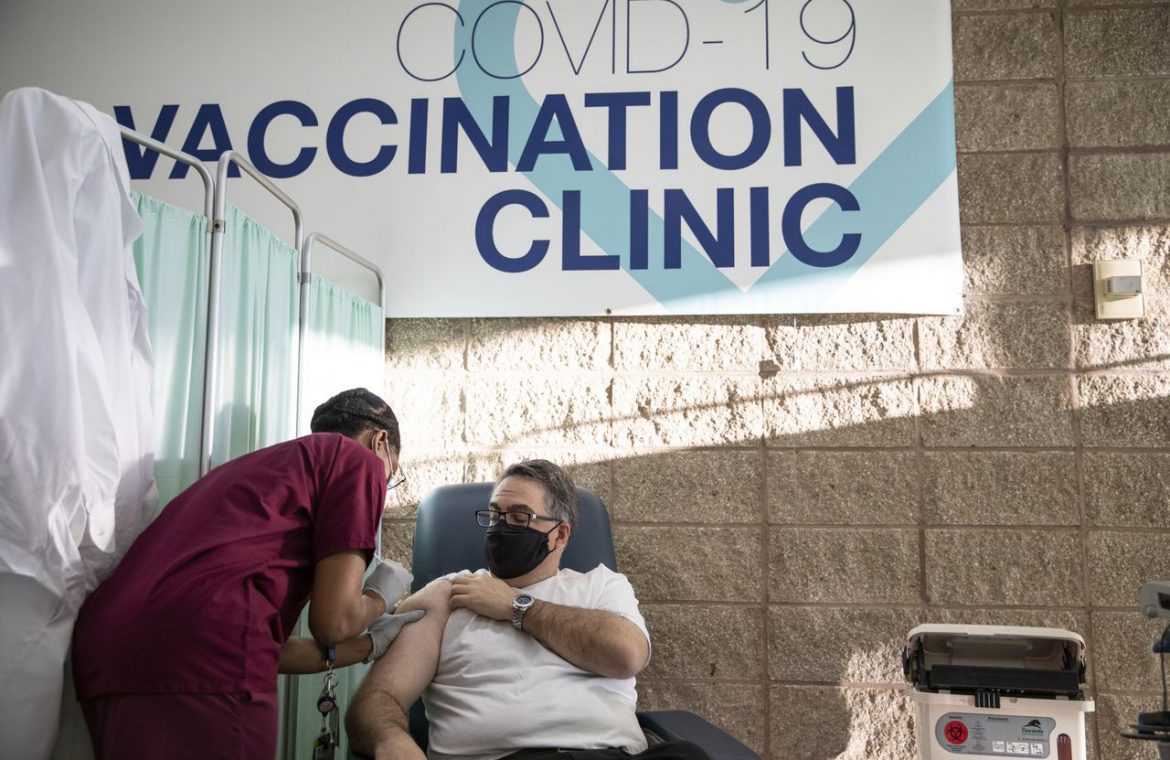 New Jersey is planning to open six coronavirus vaccination “mega-sites” across the state early next year as it continues to roll out inoculations in phases, with an aim to vaccinate 70% of its adult residents within six months, state officials announced Friday.

The announcement comes after New Jersey hospitals began issuing the state’s first vaccines to healthcare workers this week. In the first four days, 2,149 of the state’s 650,000 healthcare workers received their first dose of the two-dose Pfizer vaccine. They will receive their second dose in about three weeks.

The mega-sites will be part of expanding inoculations beyond hospitals. The state plans to administer vaccines in stages, with healthcare workers and longterm care residents in the 1a category, essential workers in the 1b category, and residents over the age of 65 and those with high-risk medical conditions in 1c.

The six sites are on pace to open in mid-January, at first providing 2,400 vaccinations a day for healthcare workers in the 1a category through mid-February, state Health Commissioner Judith Persicilli. After that, the sites will be open to people in the 1b and 1c categories.

A broader rollout of vaccinations to the general public is expected in April or May, officials have said. But that depends on how many doses the state receives.

“We expect the demand for the vaccine will outpace the supply,” Persichilli said. “We will need to initiate vaccine sites in phases to ensure equitable distribution.”

The mega-sites will be located at:

Maritza Beniquez, an emergency room nurse at University Hospital in Newark, on Tuesday became the first person in New Jersey to get a COVID-19 vaccine.

The state will provide information about how to schedule an appointment at the sites next week, Persichilli said. There will be information for how the general public can sign up once availability increases, she addd.

As for the additional satellite sites, 215 facilities have signed up so far and more are expected to follow, Persichilli said.

“As each successive group of New Jerseyans becomes eligible to be vaccinated, we will have the infrastructure in place to administer to every resident in those groups who wishes to be vaccinated,” Murphy said. “We will be ready, and we hope you will be, too.”

Persichilli acknowledged the goal of vaccinating 70% of New Jersey adult residents — about 4.7 million people — in the next six months is a challenge.

“Yes, that is aggressive. Yes, it is aspirational,” the health commissioner said. “But it is what we need to do so this virus has no place to go.”

Stressing that the vaccines are safe to take, Murphy said the state also needs residents to “step forward and raise your sleeves.”

Meanwhile, officials announced Friday that New Jersey will begin vaccinating staff members at residents at nursing homes on Dec. 28. — a week later than other states because the state missed a federal deadline. More than 7,000 at those facilities in New Jersey have died from coronavirus complications.

In addition to the Pfizer COVID-19 vaccine, Moderna’s vaccine is expected to be approved by the federal government as soon as Friday evening.

But officials said New Jersey’s allocation of vaccine doses have been reduced by about 20% through the end of this year, including the expected addition of Moderna doses.

The state had expected to receive more than 492,075 doses this month for both the Pfizer and Moderna vaccines, but that number has dropped to 392,800, Persichilli said.

“I don’t think we’ve got a satisfactory reason why,” Murphy said. “It’s nothing personal. It’s apparently every American state has received a smaller allocation.”

Murphy has warned New Jersey residents that even though the vaccine rollout has begun, the next few weeks could be tough. New Jersey has already announced more than 1,000 deaths in December, the most in any month since June.

“The vaccine’s mere presence in our state isn’t enough to move the needle,” Murphy said. “We will need to embrace it and we will need to keep up with our other practices. Everything, together, is how we’ll ultimately defeat this virus.”

On Friday, the state reported another 3,976 cases and 44 additional confirmed deaths, though hospitalizations, transmission rate, and positivity rate all dropped for the first time in “a long time,” Murphy said.

Thank you for relying on us to provide the journalism you can trust. Please consider supporting NJ.com with a subscription.

Brent Johnson may be reached at bjohnson@njadvancemedia.com.