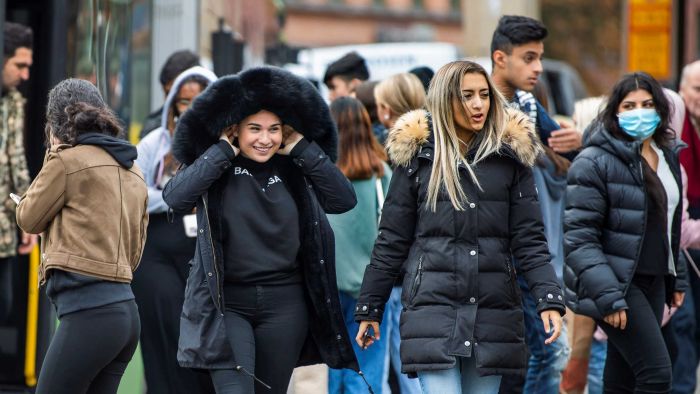 Sweden has introduced its toughest measures yet in the face of soaring COVID-19 infections, including a recommendation to wear masks at peak hours on public transport.

Key points:High schools and non-essential public workplaces, such as municipality gyms, pools and libraries, will close until January 24Restaurant parties have been limited to four people Sweden’s hands-off strategy has been divisive both at home and abroad

But the Government stopped short of ordering a general lockdown of society.

Unlike many other European countries, Sweden has resisted imposing lockdowns, relying on voluntary measures focused on social distancing and good hygiene.

It has left most schools, businesses and restaurants open throughout the pandemic.

However, a severe second wave of infections, with record numbers of new cases almost every week for the past two months, has prompted the Government to do more.

Sweden’s Prime Minister Stefan Lofven has asked citizens to limit social gatherings to eight people but there are no penalties for breaking the recommendations.(TT via AP: Anders Wiklund)

High schools were also ordered to maintain remote education until that date.

Mr Lofven said the Government recommended wearing masks on public transport during peak hours, when it is harder for passengers to keep apart.

Restaurant parties have been limited to four people and property owners and shops urged to do more to limit crowds in shopping malls.

“We are following our strategy,” he said.

“Now we see that we need to do more because we see that the spread of the infection is too serious and we have a strained situation in the healthcare system still.”

The Government has asked citizens to limit social gatherings to eight people but there are no penalties for breaking the recommendations and Mr Lofven said he did not think a lockdown was right.

At first glance, life in Sweden during the pandemic appears to have hardly changed. But those working in the public health sector have had a very different experience.

“You must also consider a very serious lockdown, for example, wouldn’t have an effect in the long run, because people would not put up with that,” he said, adding many countries in Europe with lockdowns had fared poorly.

With a total number of deaths close to 8,000, Sweden’s death rate per capita is several times higher than that of its Nordic neighbours but lower than several European countries that opted for lockdowns, such as Britain, Spain, France and Belgium.

Sweden’s strategy has drawn criticism at home and abroad, but also praise as potentially more sustainable and business-friendly.

The centre-left Government has come under domestic pressure over its handling of the pandemic.

An independent commission said earlier this week the Government had done too little, too late to protect the elderly during the spring.

And in a rare comment on public affairs, Sweden’s king said earlier this week the country had failed in its handling of COVID-19.

Don't Miss it Covid: Will the UK live under some form of lockdown until mass vaccination? – BBC Newsnight
Up Next California’s Covid-19 case surge is alarming