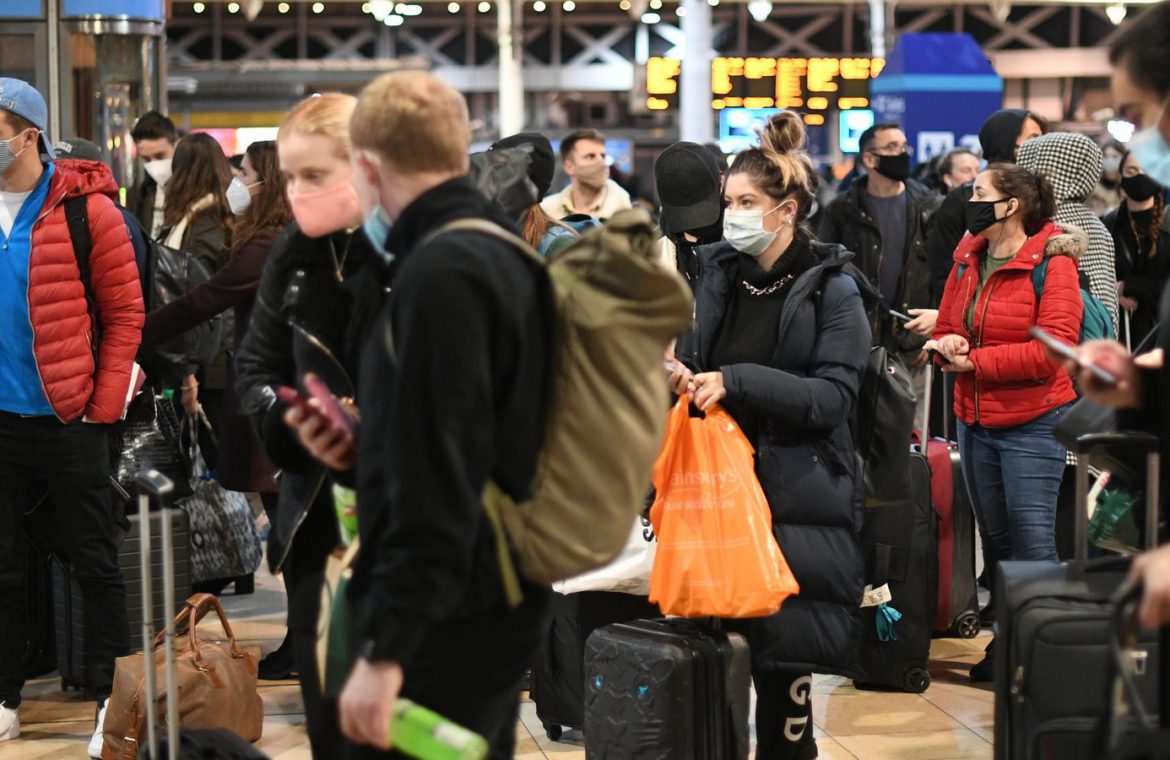 Trains were packed and roads were jammed as Londoners tried to flee the city ahead of tougher coronavirus restrictions.

Fears over a new strain of coronavirus prompted the prime minister to announce on Saturday that all of those areas previously in Tier 3 in the South East – including London – would move to the new Tier 4 on Sunday.

This would mean the closure of non-essential shops, gyms and hairdressers, with people ordered to stay home apart from limited exceptions.

It would also mean no mixing of households over Christmas, which saw many people make the last-minute dash to slightly lighter rules in other parts of England.

The rules were announced by the prime minister on Saturday at a 4pm news conference ahead of them coming into force at midnight.

By 7pm, there were no seats available online on trains from several London stations including Paddington, Kings Cross and Euston.

Harriet Clugston was among those on a train from St Pancras to Leeds, a service she described as “crammed”.

She wrote on Twitter: “Announcement on tannoy says social distancing ‘will not be possible’ due to volume and to get off if you are not comfortable with that.

Following the government’s announcement earlier this evening, if you can no longer use your tickets due to recent changes to Covid restrictions for your area you can find out more about rebooking and refunds here: https://t.co/ZS9V0UG12W

“People have tried to secure social distance by placing (suitcases) on seats but being asked to remove them by other passengers as the train is so full.”

She added: “Every person on this train including myself has made what is probably a very silly and irresponsible decision to travel albeit within the law. But that’s what people were always going to do to be together at Christmas.

“My mother lives alone and there’s no way I could not be with her at Christmas.”

A woman who did not wish to be named said she and her partner had made a “split decision” to take their young son to her parents’ home on the coast.

“We just made the decision to leave based on the fact that my parents said come, and we couldn’t bear the thought of no fresh air and a toddler going rogue round a small flat for the foreseeable,” she said.

“We also really just felt we wanted to get the baby somewhere a bit safer with a garden, though we know a lot of people won’t have that luxury.

Image:
People crowded on to the concourse at Paddington Station in London

She added: “The grandparents are just desperately happy they’ll see their grandson.

“We obviously worry about taking something down to them, but they seem happy to take the risk.”

Izzy, 22, from Bristol, said that she wanted “the security of being home for Christmas” and that her parents had come to collect her before the restrictions came into effect.

“I have a slight nervousness that they might block the roads or something, stopping me going home,” she said.

“I’m moving out of my flat so I need my dad to come and get me and he feels more comfortable doing it before Tier 4 kicks in.”