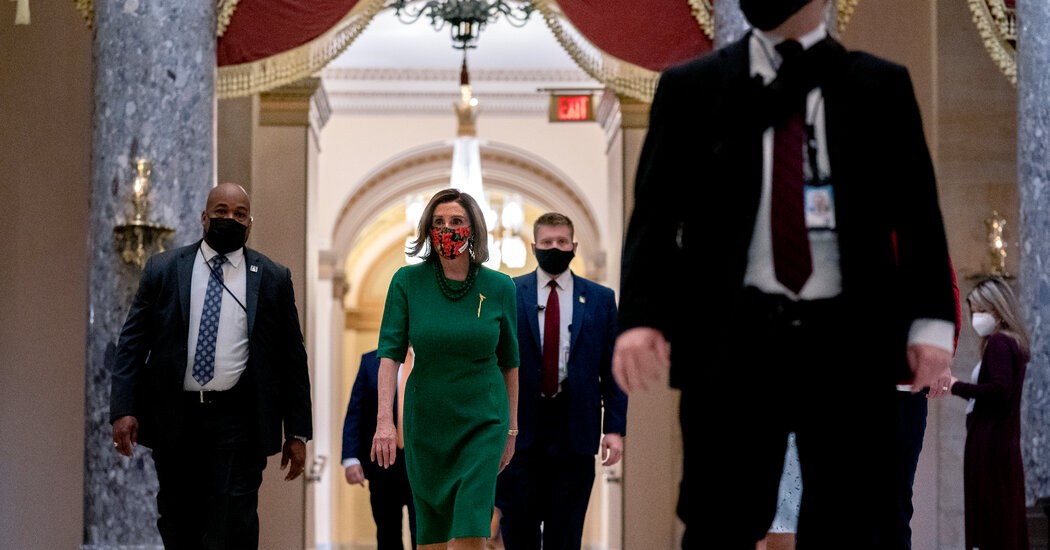 WASHINGTON — Congress on Monday night approved a $900 billion stimulus package that would send billions of dollars to American households and businesses grappling with the economic and health toll of the pandemic.

The long-sought relief package was part of a $2.3 trillion catchall package that included $1.4 trillion to fund the government through the end of the fiscal year on Sept. 30. It included the extension of routine tax provisions, a tax deduction for corporate meals, the establishment of two Smithsonian museums, a ban on surprise medical bills and a restoration of Pell grants for incarcerated students, among hundreds of other measures.

Though the $900 billion stimulus package is half the size of the $2.2 trillion stimulus law passed in March that provided the core of its legislative provisions, it remains one of the largest relief packages in modern American history. It will revive a supplemental unemployment benefit for millions of unemployed Americans at $300 a week for 11 weeks and provide for another round of $600 direct payments to adults and children.

“I expect we’ll get the money out by the beginning of next week — $2,400 for a family of four — so much needed relief just in time for the holidays,” Mr. Mnuchin said on CNBC. “I think this will take us through the recovery.”

President-elect Joseph R. Biden Jr., who received a coronavirus vaccine on Monday with television cameras rolling, has insisted that this bill is only the beginning, and that more relief, especially to state and local governments, will be coming after his inauguration next month.

Lawmakers hustled on Monday to pass the bill, nearly 5,600 pages long, less than 24 hours after its completion and before virtually anyone had read it. At one point, aides struggled simply to put the measure online because of a corrupted computer file. The legislative text is likely to be one of the longest ever, and it became available only a few hours before both chambers approved the bill. It will go to President Trump for his signature.

But with as many as 12 million Americans set to lose access to expanded and extended unemployment benefits days after Christmas, passage was not in doubt. A number of other pandemic relief provisions are set to expire at the end of the year, and lawmakers in both chambers agreed that the approval of the $900 billion relief package was shamefully overdue.

Over the summer, Speaker Nancy Pelosi of California and Mr. Mnuchin inched toward a relief package of nearly $1.8 trillion. But after a significant infusion of federal relief in April, Senator Mitch McConnell, Republican of Kentucky and the majority leader, and several Senate Republicans initially balked at the prospect of another sweeping spending package. With Republicans reluctant to spend substantial taxpayer funds and mindful of remaining united before the November election, Mr. McConnell refused to indulge anything more than a narrow, $500 billion package.

Ms. Pelosi and top Democrats, for their part, refused to entertain the targeted packages Republicans eventually put forward, and pushed to go as big as possible in a divided government. The election hung over all of the talks, with both sides not wanting to deliver the other party a victory that could buoy their chances.

And Mr. Trump, fixating first on his campaign, then his effort to reverse the election’s results, did little to corral Congress toward an agreement.

In the end, congressional leaders agreed to punt the thorniest policy issues that had long impaired a final agreement — a direct stream of funding for state and local government, a Democratic priority, and a broad liability shield that Mr. McConnell had long fought for.

“A few days ago, with a new president-elect of their own party, everything changed,” Mr. McConnell said on Monday. “Democrats suddenly came around to our position that we should find consensus, make law where we agree, and get urgent help out the door.”

As the negotiations dragged on, millions of Americans slipped into poverty, thousands of small businesses closed their doors and coronavirus infections and deaths rose to devastating levels across the country.

But Ms. Pelosi vowed that with Mr. Biden in office, Congress would revisit the unresolved debates and push for even more relief to support the country’s economic recovery.

“It’s a whole different world when you have the presidency because you do have the attention of the public,” Ms. Pelosi said in an interview. “I’m very optimistic about that because the public wants us to work together.”

Economists and several outside groups agreed that the $900 billion compromise amounted to a necessary but insufficient salve to the economic and health wounds suffered during the monthslong impasse.

In addition to reviving and preserving a series of expanded and extended unemployment benefits first established in the $2.2 trillion stimulus law, the bill also provides an additional $100 a week to some “mixed earners” — people who earn money both as employees and as freelancers or contractors — in order to undo a wrinkle in the March stimulus law that barred people who qualified for regular unemployment benefits from the program targeting freelancers and gig workers.

But the bill could make it harder for some people to receive benefits under that program, known as Pandemic Unemployment Assistance. Until now, many people have been able to qualify for the program by certifying that they lost employment or earnings without needing to provide proof. The new bill requires people to provide documentation in order to receive benefits under the program, which advocates for the unemployed warned could further burden already strained state unemployment offices.

Instead of forcing a hard end to the unemployment programs, lawmakers also agreed to allow the benefits to slowly taper off through early April, depriving negotiators of a hard deadline to force talks to resume in early spring.

It revives a popular business loan program, the Paycheck Protection Program, and allows businesses to receive a second loan and expand eligibility under that program for nonprofit organizations, local newspapers and radio and TV broadcasters. It will allocate $15 billion for performance venues, independent movie theaters and other cultural institutions devastated by the restrictions imposed to stop the spread of the virus.

The bill also ensures that businesses will be able to deduct payroll costs and other expenses covered by the Paycheck Protection Program, and it will expand a tax credit that subsidizes wages for businesses hurt by the pandemic.

The bill contains $82 billion in education funding, with about $54 billion going to the nation’s K-12 schools and $22.7 billion going to colleges and universities, funds that still fall short of what both sectors say they need to blunt the effect of the virus, which has crippled school budgets and left its most vulnerable students in dire academic and financial straits.

Governors would receive $4.1 billion in a separate pot of relief funding, $2.75 billion of which would be reserved to support private and parochial schools, after Democrats fought to ensure the funding would not be used for private school vouchers. The bill also includes requirements and restrictions for how private schools that have received funding under the Paycheck Protection Program are eligible to receive state funds.

The bill also includes a number of tax provisions that are less significant to the overall economy but will make a big difference for some individuals and businesses. Republicans also secured a tax write-off, favored by corporate lobbyists and the White House, that Democrats have derided as a “three-martini” deduction allowing businesses to deduct 100 percent, instead of up to half, of their meal expenses.

Low-income workers will be able to qualify for tax credits based on either their 2019 or 2020 income — a priority for Democrats because people who lost jobs during the pandemic could otherwise lose out on programs like the earned-income tax credit that require people to work to qualify for the full benefit.

The Federal Reserve’s emergency loan programs, which Congress backed up with a $454 billion appropriation this year, were for a time a major sticking point in the negotiations. The text of the bill reflects compromise Fed language that Senator Patrick J. Toomey, Republican of Pennsylvania, ultimately agreed to accept.

While Mr. Toomey had initially wanted to ban Fed emergency loan programs “similar to” the ones it had set up to funnel money to companies, states and municipal borrowers during the pandemic downturn — a bid to prevent Democrats from re-establishing copycat programs next year as a way to get cheap money out to states — the text now simply prohibits the Fed and the Treasury Department from re-establishing the “same” programs.

While that is a seemingly minor difference, it could leave the door open to future municipal bond buying or direct business lending, by Democrats’ reading. Mr. Toomey said in an email on Sunday that he believed the Fed and the Treasury Department would need to consult Congress before funneling credit directly to such borrowers again.

With less than two weeks left before the new Congress is sworn in on Jan. 3, lawmakers also rushed to load the legislation with other legislative priorities.

Among the added measures were a last-minute bipartisan, bicameral agreement to ban surprise medical bills that come when patients unwittingly receive care from an out-of-network health provider. Hospitals and doctors will now need to work with health insurers to settle the bills, not force the charges on patients.

Lawmakers put a provision into the congressional omnibus package that provided the Open Technology Fund — a federally funded nonprofit that helps millions in China and Iran gain access to the internet — 90 days to contest a move by a Trump appointee, Michael Pack, to defund the organization. The provision will probably allow a Biden appointee to decide whether the group continues to receive funding, which multiple internet freedom experts think is likely.

Also tucked into the spending deal is legislation creating two Smithsonian museums, focused on women’s history and American Latinos, in Washington. Activists and lawmakers have spent decades fighting to win congressional approval, and had been temporarily blocked this month by the objections of a single senator, Mike Lee, Republican of Utah.

Don't Miss it COVID-19 numbers are on the rise, but the province-wide lockdown is still days away. Why the delay? Aren’t we in the midst of a crisis?
Up Next People with disabilities: Disregarded during the coronavirus pandemic? | COVID-19 Special