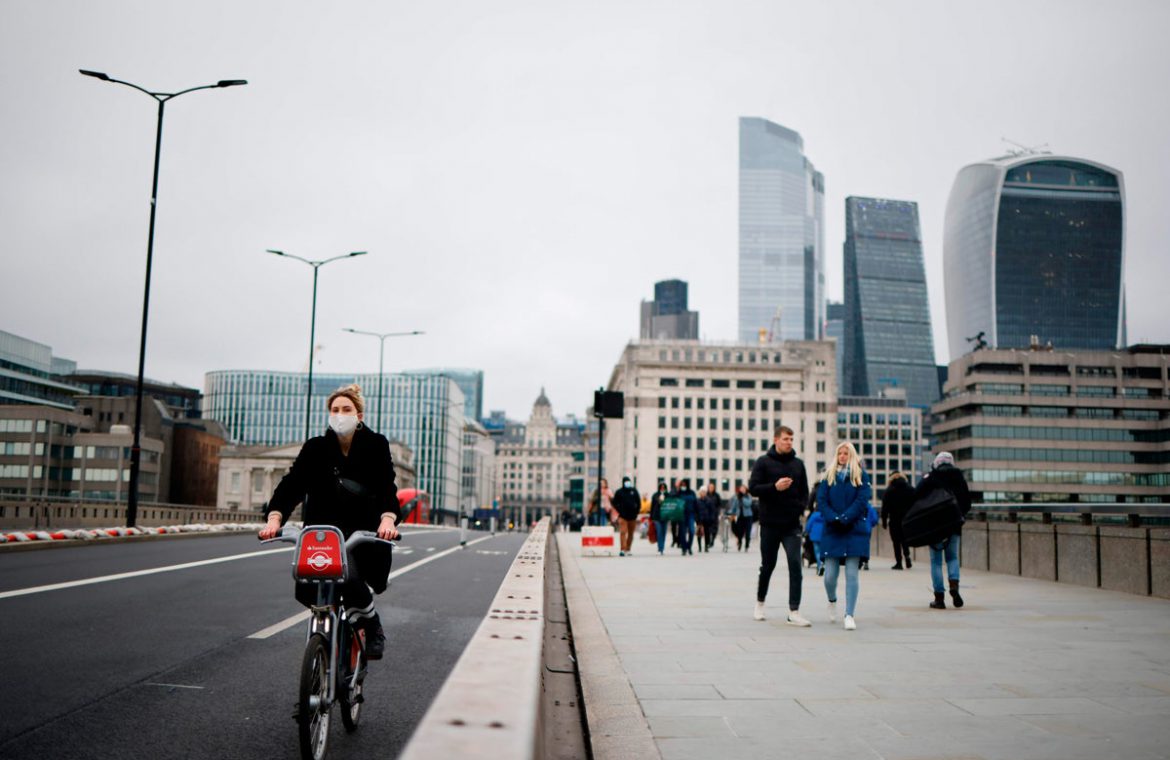 ritons face a challenging start to 2021 as the coronavirus pandemic continues to “run rampant in our communities,” the UK’s chief medical officers have warned.

Yesterday saw a new record high of 55,892 daily Covid-19 cases across Britain – the highest since mass testing began in late May – as the official death toll rose by 964.

The Royal College of Nursing’s England director Mike Adams said the country was in the “eye of the storm” and the situation was “unsustainable”.

He told Sky News: “We did go into this pandemic with a huge shortage of healthcare staff, in particular nurses.

“If you then add in the exhaustion, the tiredness, the sickness rates that have begun to creep in, this is the outcome that no-one wants but it is really a last resort for people to come in off their leave.

“Long term, this will have a detrimental effect on workers, people need a break, they have got to get their rest.

“So, it is the eye of the storm and it is a situation that is unsustainable.”

The Royal College of Nursing’s England director Mike Adams said the expectation of a mass rollout in capacity through the Nightingale hospitals was “misplaced”.

He told Sky News that staff leave was being cancelled in different NHS trusts across England.

When asked if there was enough staffing capacity to fill the Nightingale hospitals, he added: “If we are having to cancel leave to staff these areas, the obvious question is where will the staff come from to open the Nightingales?

“I am sure there will be moves to open some beds, there are some beds open in different Nightingale hospitals in different areas of the country.

“I have real concerns that the expectation that this mass rollout in capacity can happen is misplaced because there aren’t the staff to do it.”

People working in emergency medicine are currently having a tough time and are “very much at battle stations,” a leading physician has said.

Adrian Boyle, vice president of the Royal College of Emergency Medicine, told BBC Breakfast that emergency medicine tries to “rise to a crisis” but added: “What is it going to be like over the next couple of months, I don’t know, I am worried. We are very much at battle stations.

“There will be short-term surges of morale but people are tired, frustrated and fed-up, as everybody is whether they work in hospital or not.

“The people who go into emergency medicine expect it to be tough from time to time. There is a real worry about burn-out.”

He said there was “a huge pulling-together” in April and March but sustaining that for a long time is uncertain because no-one knows when the surge of cases will end.

Much of how these issues can be dealt with “depends on the public to start engaging, obeying the rules and doing the social distancing and all the things they are supposed to do”, he said.

Anthony Gordon, professor of critical care medicine at Imperial College London and an ICU consultant at St Mary’s Hospital in London, said there had been a build-up of coronavirus patients in recent weeks.

“We’d seen the cases coming back in during October and November but then before Christmas there was a big increase, many more referrals every day, and that has continued constantly since then.

“Our concern is we don’t know when this is going to stop because there are still more cases coming in.

“It is about a week later before people get critically ill, so that number could still rise and we are very worried about that.”

He called on people to go beyond the Government guidance where applicable and only leave the house if they really had to in order to lower the rate of transmission.

1609490212Hospital admissions are starting to surge across the country

Dr Alison Pittard, dean of the Faculty of Intensive Care Medicine, said she feared the added pressures being seen at London hospitals in dealing with the volume of coronavirus patients had started to spread across the country.

Asked whether the problems were becoming more “widespread”, she told BBC Radio 4’s Today programme: “That’s what appears to be happening.

“Everyone has seen what is happening in London and the pressure that is putting both on organisations and on staff as well, and we fear it is only a matter of time before it starts to spread to other parts of the country, and we are already starting to see that.

“It is really important that we try and stop the transmission in the community because that translates into hospital admissions.”

Dr Pittard said staff had become “tired and exhausted” due to the increased workload following a number of hectic months dealing with coronavirus patients.

She added that moving patients to less busy hospitals for intensive care treatment was a “logistical nightmare” and took up additional staff time.

Dr Christine Tait-Burkard, of the University of Edinburgh, said it makes sense to vaccinate most of the population to try and cut the spread of the virus and to make the vaccine last longer.

She told BBC Breakfast: “Overall, it makes sense to get more of the population vaccinated but I understand that it will have caused some concern for the people who were already scheduled for the second dose of the vaccine and they will have to wait longer, but the protection is very good from a single dose.”

She believes the Pfizer vaccine will still be used for vulnerable people while the Oxford-AstraZeneca vaccine, where more doses are available, can be rolled out much faster.

She suggested the army could used in the vaccine rollout which needs to be done quickly as “the NHS being under so much strain from the rising caseloads of covid that this needs to be done with additional help”.

Axel Gandy, chair in statistics at Imperial College London, said the high rate of infection in the new coronavirus variant meant that transmission of the disease was likely to have tripled even during England’s November lockdown conditions.

It comes after the MRC Centre for Global Infectious Disease Analysis at Imperial confirmed the variant does spread quicker.

Professor Gandy told BBC Radio 4’s Today programme: “Overall, we’ve been able to determine that the new variant increases the reproduction number – so that’s the number of people infected on average per infected person in the future – by about 0.4 to 0.7.

“That doesn’t sound like much but the difference is quite extreme.

“Under the November lockdown conditions, the reproduction rate was in the region of 0.9 and with the old variant that would mean that over two to three weeks, the cases would decrease by about 30 per cent, whereas in the new variant they would triple.

“The number of cases would increase by a factor of three, so there is a huge difference in how easily this virus spreads.”

He added that since the November lockdown had been eased, it did not look like there was evidence to suggest children of school-going age were more likely to carry the new variant.

The latest US case of the Covid-19 variant that has been seen in the UK has been discovered in Florida, health authorities in the southern state announced.

The case, disclosed in a Florida Health Department statement tweeted on its HealthyFla site, comes after reports in recent days of two individual cases of the strain of Covid-19 discovered in Colorado and California.

Florida’s health statement said the new virus variant was detected in a man in his 20s in Martin County, which abuts the Atlantic Coast above densely populated South Florida. It said its experts were working with the Atlanta-based federal Centres for Disease Control on investigating the case.

The health department did not give further details, such as releasing the man’s medical condition or how the strain was detected, though it noted he had no recent travel history.

California on Wednesday announced the nation’s second confirmed case of the new virus strain. The announcement came 24 hours after word of the first reported US variant infection, which emerged in Colorado — in a Colorado National Guardsman who had been sent to help out at a nursing home struggling with an outbreak.

New Year’s Eve was “quite quiet” in London, where Tier 4 restrictions meant that most places are closed, Ken Marsh, chairman of the Metropolitan Police Federation, has said.

Sporadic gatherings of people “who just won’t take note of what is being said” were quickly dealt with by officers and smaller gatherings were also dispersed, Mr Marsh said.

He told BBC Breakfast: “I think the public have really cottoned on that this is really serious, the position that we are in, and we did not see the numbers we thought we would.”

He said the number of officers who are off now with Covid-19 or are self-isolating has been peaking over the last three or four weeks.

He told the programme: “We have got probably 1,200 or 1,300 officers who are off with Covid or self-isolating and that is predicted to double in the next couple of weeks, and puts a massive strain on my colleagues who are still at work performing their roles.

“There are no other officers available other than what is in the pot.”