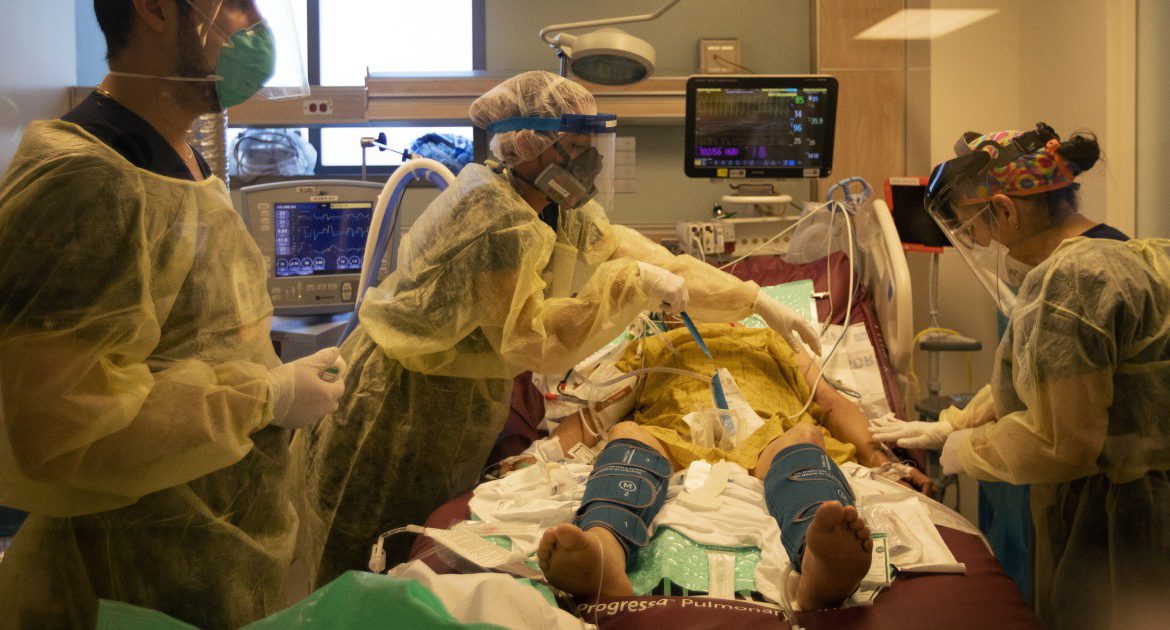 The dreaded post-Christmas spike in coronavirus cases appears to be materializing in Los Angeles County, with a new rise in cases as hospitals are already in crisis from the Thanksgiving surge.

Los Angeles County posted its third highest single-day total for coronavirus cases on New Year’s Day, reporting 19,063 cases. That means that over the last seven days, there has been an average of more than 16,000 new coronavirus cases a day reported in the county — about 12 times bigger than the comparable figure from Nov. 1 and the highest figure ever recorded.

The county had seen particularly aggressive growth in daily coronavirus cases in mid-December, but then saw new cases flatten over the last week and a half, generally adding on average 13,000 to 14,800 new cases a day.

The tally reported Friday pushed the average number of new daily coronavirus cases over the last week to 16,077 — precisely around the same time that epidemiologists warned that people infected around the Christmas holiday would begin to become infectious.

Before Friday’s numbers for L.A. County were released, Dr. Robert Kim-Farley, medical epidemiologist and infectious diseases expert with the UCLA Fielding School of Public Health, said he expected that the pandemic in L.A. County would worsen soon because of the amount of travel observed over Christmas and New Year’s.

Kim-Farley said L.A. County was in the midst of a “viral tsunami,” but added that “we should not be frozen in despair that there is nothing we can do.”

“Now is the time to get to ‘higher ground’ — in this case, higher ground means staying at home and not mixing with others outside of your household as much as possible and not being outside where the viral tsunami could reach us,” Kim-Farley said.

Despite the grim outlook for the weeks ahead, Kim-Farley said, “there’s no question in my mind that had we not had the stay-at-home order, the situation would be far more dire than it is now. However, I think the magnitude of the numbers show that in the face of the stay at home order, many people are choosing to ignore it, and with no strong enforcement, these mixing of households and parties continue to occur.”

The death toll has already spiked in December, largely a result of people en masse, fatigued by the pandemic, ignoring pleas by officials to stay home for Thanksgiving and deciding to gather with friends and family over that holiday. There were 2,703 COVID-19 deaths reported in L.A. County in December, by far the deadliest month of the pandemic and more than four times worse than November’s death toll of 585.

Hospitals across L.A. County are being overwhelmed by the pandemic, with most forced to turn away ambulances for much of the day as medical institutions buckle under the weight of unprecedented demand for critical hospital care. Hospital morgues and private funeral homes are so full of corpses that the National Guard has been asked to help with efforts to store the bodies temporarily at the county medical-examiner-coroner’s office.

As one of the nation’s largest metropolises with some of the nation’s densest neighborhoods, L.A. County is considered to be particularly vulnerable in a pandemic. The county, home to more than 10 million people, suffers in a number of neighborhoods from high rates of poverty and costly housing that lead to overcrowded homes. Southern California also has huge numbers of essential workers who must leave their homes to work, many employed in food factories and warehouses, where the virus can also spread easily.

Some patients are waiting up to nine hours in waiting rooms with low blood pressure and low oxygen levels. A number of facilities are reporting running dangerously low on supplies of oxygen. Some patients transported by ambulances are waiting as long as eight hours to be dropped off at emergency rooms. There’s fear that people suffering from strokes, heart attacks and seizures aren’t getting the swift attention they need.

With so many COVID-19 patients suffering from inflamed lungs that make them gasp for air, some aging hospital systems have been unable to keep up with the demand for high-flow rates of oxygen needed to be piped into their lungs. The U.S. Army Corps of Engineers is planning to send crews to the region to update oxygen-delivery systems at a handful of hospitals.

As of Friday night, California is now averaging 339 COVID-19 deaths a day over the last week, a record. The state is also averaging about 40,000 new coronavirus cases a day, only slightly lower than the peak of 45,000 new cases a day recorded in mid-December.

Other parts of the state are also struggling with overcrowded hospitals.

In Santa Clara County, hospitals have been stretched to the limit, with 50 to 60 patients each day stuck in emergency rooms waiting for a hospital bed. Often, the only way a patient can be moved into an intensive care unit bed is when a COVID-19 patient has died, Dr. Marco Randazzo, an emergency room physician at O’Connor Hospital in San Jose and St. Louise Regional Hospital in Gilroy, told reporters Thursday.

The daily coronavirus case rate in Santa Clara County is more than 10 times as much as it was Oct. 30, officials said.

“This has been the state of the pandemic for the last several weeks, and it is showing no signs of letting up,” said Dr. Ahmad Kamal, the county’s director of health preparedness. “What we are seeing now is not normal.”

Kamal pleaded with the public to not give up wearing masks, staying socially distant and canceling gatherings. He said there are some indications that Santa Clara County, in the days after Christmas, has avoided the more dramatic deterioration in hospital conditions it endured after Thanksgiving.

“This shows that actions matter,” Kamal said. “While it may seem futile, given how many cases we are [at] and how prevalent COVID is in our community, we know that our decisions and our actions drive the curve of this pandemic.”

But many hospitals are already at the breaking point, and officials fear a Christmas surge will make things worse.

Despite the risks of spreading the coronavirus amid a deadly surge in the pandemic, people could be seen standing shoulder to shoulder while jumping, singing and shouting in a video posted by Feucht’s Instagram account. Most in the crowd did not wear face coverings.

Earlier Thursday evening, actor Kirk Cameron and others gathered at Point Mugu Beach in Ventura County, according to ABC-7 video and other news sources.

“We need to be listening for the voice of God, rather than being distracted by the noise of men. … And let’s let our 2021 be a year of trumpets and shouting,” Cameron said in a video posted on his Instagram page, which showed a crowd shouting and clapping in response to his sermon. Most people were not wearing masks.