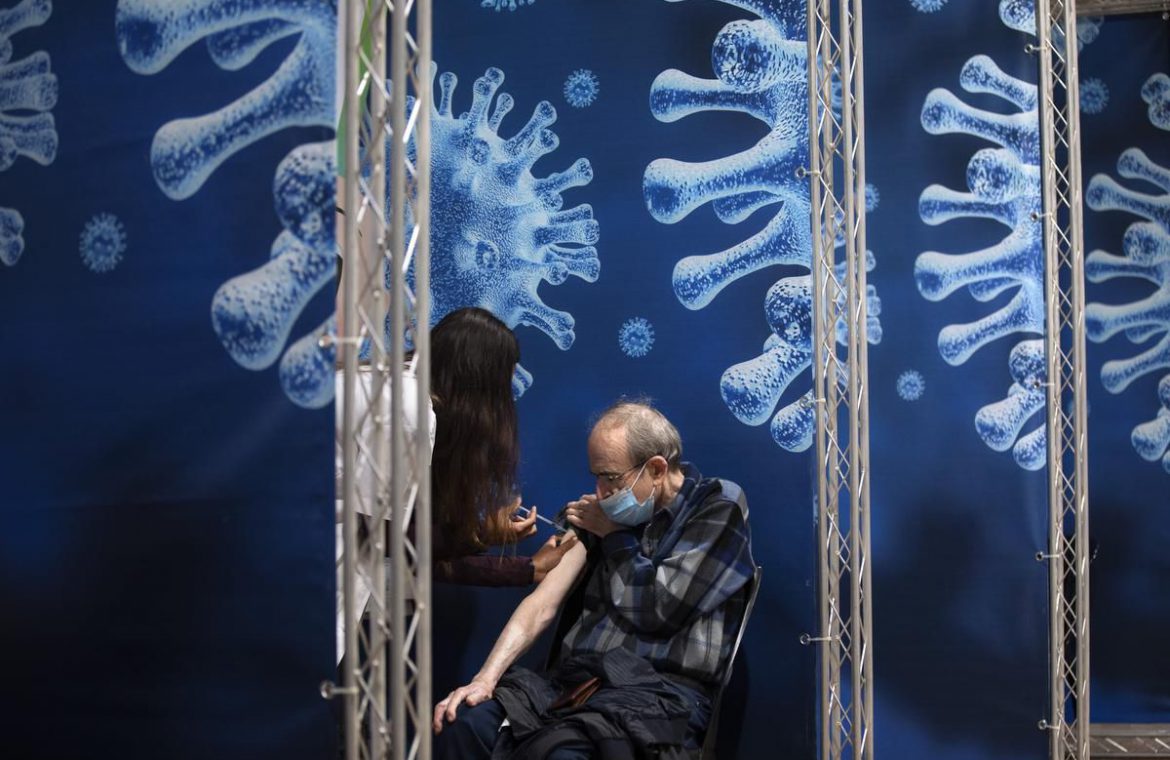 5 a.m.: A prominent German state governor is calling for the country’s lockdown to be extended until the end of January.

8:53 a.m.: Blame COVID-19 travel restrictions or Brexit but whatever the cause, some British citizens trying to return to their homes in Spain this weekend have been barred from boarding flights.

Airlines are refusing documents that before Brexit had been valid proof of the Britons’ status as residents in Spain.

Their ordeal comes amid heightened travel restrictions due to a coronavirus variant that has been blamed for faster contagion in the U.K. and highlights the bureaucratic complexities resulting from Britain’s departure from the 27-nation European Union.

Both Spanish and British authorities said Sunday that the green-colored certificate of EU citizenship with a foreign national identification number issued by Spain is still valid for British citizens residing in Spain under the bilateral provisions that followed the U.K.’s withdrawal from the bloc on Dec. 31.

8 a.m.: In response to rising COVID-19 numbers, Zimbabwe has reintroduced a night curfew, banned public gatherings, and indefinitely suspended the opening of schools.

“We are being overwhelmed and overrun,” Information Minister Nick Mangwana warned, saying the country’s hospitals are rapidly reaching capacity with COVID-19 patients.

Zimbabwe recorded 1,342 cases and 29 deaths in the past week, “the highest number recorded so far,” Vice-President Constantino Chiwenga said, announcing the strict measures.

7 a.m.: The COVID-19 death toll in the United States has surpassed 350,000 as experts anticipate another surge in coronavirus cases and deaths stemming from holiday gatherings over Christmas and New Year’s.

Data compiled by Johns Hopkins University shows the U.S. passed the threshold early Sunday morning. More than 20 million people in the country have been infected. The U.S. has begun using two coronavirus vaccines to protect health care workers and nursing home residents and staff but the rollout of the inoculation program has been criticized as being slow and chaotic.

Multiple states have reported a record number of cases over the past few days, including North Carolina and Arizona. Mortuary owners in hard-hit Southern California say they’re being inundated with bodies.

The U.S. by far has reported the most deaths from COVID-19 in the world, followed by Brazil, which has reported more than 195,000 deaths.

6:40 a.m.: Thailand has reported 315 new coronavirus cases as it gets set to implement new measures to fight a recent spike in infections. Officials said that 294 of the new cases reported Sunday were local infections. The virus has spread from six provinces in mid-December to 53 currently. As a result, authorities have outlined new measures that will take effect Monday. Restaurants in the 28 highly controlled provinces can continue normal operations, but with strict social distancing rules. However, the governors in each province are authorized to consider allowing them for takeaway only. Also, restaurants will not be allowed to serve alcoholic drinks and people will be asked to avoid unnecessary travel. On Saturday, the Ministry of Education said all public and private schools in the 28 highly controlled provinces will be closed from Monday through at least Jan. 31. Thailand has confirmed a total of 7,694 cases, including 64 deaths.

6:39 a.m.: More Australian states and territories are reimposing travel restrictions to prevent the spreading of the coronavirus from new outbreaks in New South Wales and Victoria states.

The Australian Capital Territory has shut out non-residents who have been on the northern beaches of Sydney, where the outbreaks are most concentrated, Greater Sydney and other smaller centres, unless they have an exemption.

The island state of Tasmania has barred anyone directly linked to the latest Victorian cases, listing exposure sites where confirmed cases are known to have been. The move followed Tasmania’s declaration of Greater Sydney and the Wollongong area south of Sydney as medium-risk zones, requiring travellers to quarantine for 14 days on arrival, while those from Sydney’s northern beaches are barred from entering.

Victoria reported three new cases of community transmission on Sunday, down from Saturday’s 10. In total, there have been 21 locally acquired Victorian cases over recent days, all linked to the New South Wales outbreak.

6:17 a.m.: Officials have tested more than 4.4 million residents in the northeastern Chinese city of Shenyang after the discovery of a new coronavirus cluster there. So far, only four cases have been confirmed from the testing. Another case was reported Sunday in a different city in Liaoning province. China reported a total of 11 new domestically transmitted cases on Sunday — five in Liaoning, four in in northeastern Heilongjiang province, one in Beijing and one in Hebei province, just outside of Beijing. Authorities across China are on high alert as new cases continue to emerge. The city of Heihe in Heilongjiang province suspended bus and taxi services after it reported four new cases. It has also temporarily shut down all business venues in the city except for markets, and sealed off residential communities. Both Beijing and Liaoning province reclassified some areas as medium risk while sealing off residential compounds where earlier cases were discovered.

6:05 a.m.: As richer countries race to distribute COVID-19 vaccines, Somalia remains the rare place where much of the population hasn’t taken the coronavirus seriously. Some fear that’s proven to be deadlier than anyone knows.

“Certainly our people don’t use any form of protective measures, neither masks nor social distancing,” Abdirizak Yusuf Hirabeh, the government’s COVID-19 incident manager, said in an interview. “If you move around the city (of Mogadishu) or countrywide, nobody even talks about it.” And yet infections are rising, he said.

It is places like Somalia, the Horn of Africa nation torn apart by three decades of conflict, that will be last to see COVID-19 vaccines in any significant quantity. With part of the country still held by the al-Qaida-linked al-Shabab extremist group, the risk of the virus becoming endemic in some hard-to-reach areas is strong — a fear for parts of Africa amid the slow arrival of vaccines.

“There is no real or practical investigation into the matter,” said Hirabeh, who is also the director of the Martini hospital in Mogadishu, the largest treating COVID-19 patients, which saw seven new patients the day he spoke. He acknowledged that neither facilities nor equipment are adequate in Somalia to tackle the virus.

Fewer than 27,000 tests for the virus have been conducted in Somalia, a country of more than 15 million people, one of the lowest rates in the world. Fewer than 4,800 cases have been confirmed, including at least 130 deaths.

6 a.m.: India authorized two COVID-19 vaccines on Sunday, paving the way for a huge inoculation program to stem the coronavirus pandemic in the world’s second most populous country.

The country’s drugs regulator gave emergency authorization for the vaccine developed by Oxford University and U.K.-based drugmaker AstraZeneca, and another developed by the Indian company Bharat Biotech.

Drugs Controller General Dr. Venugopal G. Somani said that both vaccines would be administered in two dosages. He said the decision to approve the vaccines was made after “careful examination” by the Central Drugs Standard Control Organization, India’s pharmaceutical regulator.

“It would make every Indian proud that the two vaccines that have been given emergency use approval are made in India!” Modi tweeted.

5 a.m.: A prominent German state governor is calling for the country’s lockdown to be extended until the end of January and says there should be no rushed reopening of schools.

Germany’s current lockdown took effect on Dec. 16 after a partial shutdown that started at the beginning of November failed to reduce new coronavirus infections. It was initially set to expire Jan. 10.

It’s clear that Chancellor Angela Merkel and Germany’s 16 state governors will agree to extend it when they review the situation on Tuesday. The question is by how long, and to what extent schools will open.

Bavarian governor Markus Soeder told Sunday’s Bild am Sonntag newspaper that “the lockdown must be extended until the end of January.” He said that “hasty easing would set us back a long way” and that neighbouring Austria has shown “the open-closed-open-closed model doesn’t work.”

Some officials advocate opening primary schools early. But Soeder, whose state has above-average virus infections, said it would be “irresponsible” to send all students and teachers straight back to school.

Germany’s new infections remain at nearly three times the level of 50 per 100,000 residents over seven days that the government wants to reach.

2:30 a.m.: Congress is preparing to convene for the start of a new session, swearing in lawmakers during a tumultuous period as a relative handful of Republicans work to overturn Joe Biden’s victory over President Donald Trump and the coronavirus surge imposes limits at the Capitol.

Democrat Nancy Pelosi is set Sunday to be reelected as House speaker by her party, which retains the majority in the House but with the slimmest margin in 20 years after a November election wipeout.

Opening the Senate could be among Mitch McConnell’s final acts at majority leader. Republican control is in question until Tuesday’s runoff elections for two Senate seats in Georgia. The outcome will determine which party holds the chamber.

Don't Miss it Covid-19: Congress questions nod to Covaxin; BJP hits back | India News
Up Next US hospitals at capacity as daily infections surpass 200,000 | ABC News