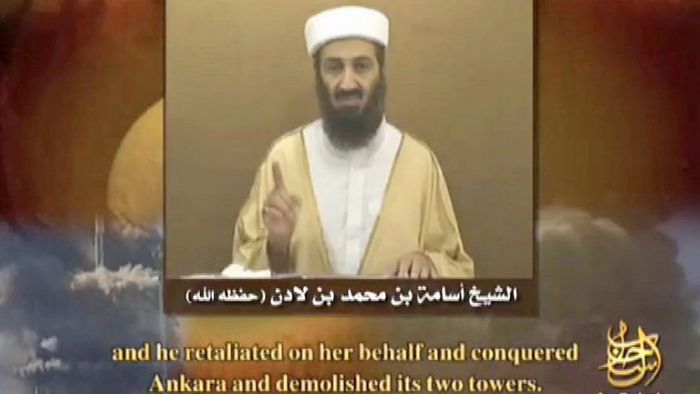 “Our youths love death as you love life”.

That was the chilling message Osama Bin Laden sent to the West when he “declared war” in 1996.

His followers, he said, would fight “as long as they live” until Americans were expelled from the “Holy Lands”, “defeated and humiliated”.

Nearly 3,000 people were killed in what remains the deadliest terrorist attack in history.

Almost 20 years on, there is still so much to understand about this event that changed our world. It triggered a “War on Terror” that has never ended. The war in Afghanistan is the longest in US or Australian history.

Bin Laden’s Al Qaeda has spawned other Islamist terror groups from ISIS, to Jemaah Islamiya, Boko Haram and Al Shabaab. Terrorists have struck in cities around the globe, including Sydney.

The ghost of Bin Laden

Coronavirus may have pushed terrorism from the headlines this past year, but the world is still haunted by the ghost of Bin Laden.

Philosopher Donatella Di Cesare says Bin Laden “continues to disturb the West” because of the “victory” that he achieved — “a victory above all in the media”.

The 2001 attacks were a media event, captured in real time around the globe.

Just 10 years earlier in 1991, the Soviet Empire had fallen, marking the end of the Cold War and the beginning of what was heralded as a new world order.

This was a break in the presumed “natural order”, an Enlightenment view that human beings were moving inexorably toward “liberation” from the worst aspects of religious dogma or virulent nationalism and political ideology.

The Al Qaeda leader chose his targets carefully: America — and New York especially — was the symbol of Western capitalism and democracy.

Di Cesare says the Cold War was replaced with what she calls “global war”: “a permanent state of violence…an absolute hostility, unhampered by limits, that becomes a way of life”.

The Cold War “marked the decline of modernity, its last horizon”, she says, and in the stand-off between the two nuclear superpowers, the US “blocked the advent of a new incomparably more violent epoch”.

The attack on American heartland was, Di Cesare says, “the first dramatic revelation of the global war”.

What drove Bin Laden and his followers in Al Qaeda?

Security analyst Michael Mazarr says it was a rejection of modernity. Always, he says, “the target is ‘The West’ as the presumed author of soulless modernism”.

Bin Laden and Al Qaeda were cast as archaic purveyors of medieval religious hatred: Islamist violence acts of madness by people of another age.

Mazarr dubbed them “unmodern men” in a modern world.

That misses two important points. Firstly, violence is built into modernity — the gulag and the gas chamber are products of the modern world.

Secondly, Al Qaeda — while waging war on modernity — was absolutely modern. The Islamist movement was a political response to the fall of the Ottoman Empire after World War One. The Muslim Brotherhood became an ideological forerunner of groups like Al Qaeda.

Theirs is a two-pronged war: against the West, and for the soul of Islam.

Muslims have been the greatest victims of Islamist terrorism. Bin Laden always said his strategy was to attack the far enemy — America — to start a war with the “near enemy”, Islam itself.

The 9/11 attacks marked a hinge point of history: an unravelling of the West and the project of globalisation and an increasing threat from outside the West.

Responding to 9/11, French philosopher Jacques Derrida said modernity carried within it the virus of terrorism.

As Donatella Di Cesare says “a cure has not been discovered”, this “resistance to modernisation” put the “very existence of the world in jeopardy”.

The return of China

The threat of terrorism coincided with the return of China as a global power: the Chinese Communist Party is also a product of modernity, yet rejects Western universalism.

There are interesting connections between China and Islamist groups.

One of the world’s leading analysts of political Islam, Olivier Roy, points out jihadism is a youth-dominated movement that draws inspiration from the Chinese cultural revolution.

He writes: “Not only are human beings destroyed, but statues, places of worship and books are too”.

The Islamists’ military handbook, The Management of Savagery, acknowledges a debt to Mao Zedong’s asymmetrical warfare: how to take a smaller force and defeat a more powerful one.

After Mao Zedong’s death, limits were placed on presidential terms — but those have disappeared under Xi Jinping.(Wikimedia Commons)

Guillaume Beaurpere, a US Army Lieutenant Colonel who served in Iraq and studied Al Qaeda ideology, joined the dots between Islamist strategy and Maoist doctrine, and says while the circumstances and motives of the Chinese communist revolution are different to Islamist terrorism, it is “most evident” that the strategy is Mao’s.

Has coronavirus accelerated the West’s decline?

Bin Laden’s attack on the US revealed a Western fragility that has deepened with 20 years of crisis: war, economic collapse, rising inequality; retreating democracy and increasing political polarisation.

Coronavirus has arguably accelerated the decline particularly in the devastated US.

Space to play or pause, M to mute, left and right arrows to seek, up and down arrows for volume.WatchDuration: 1 minute 34 seconds1m 34s The cartoon took a swipe at the US’s criticism of China’s lockdown measures, variants of which have now been used globally.

The fallout from the war on terror, which created waves of refugees, has also contributed to a far-right political blowback with its own extremist terrorist violence.

Terrorism and coronavirus have altered the nature of freedom, eroding the very virtues the West was built on.

This is crucial at a time when liberal democracies are being challenged by a rise of authoritarianism.

The world enters 2021 in a vulnerable and potentially dangerous state. Osama Bin Laden is long dead and Al Qaeda and ISIS have been uprooted from their strongholds.

As the West feels the presence of death from the virus, Olivier Roy reminds us of the death obsession of Bin Laden’s disciples.

Violence, he says, “is not a means. It is an end in itself. It is violence devoid of a future”.

Don't Miss it COVID-19: Teachers ‘have legal right not to return to school’ as govt insists remote education ‘a last resort’ | UK News
Up Next Cowboys, Giants both hit with COVID-19 issues ahead of must-win NFC East clash in Week 17