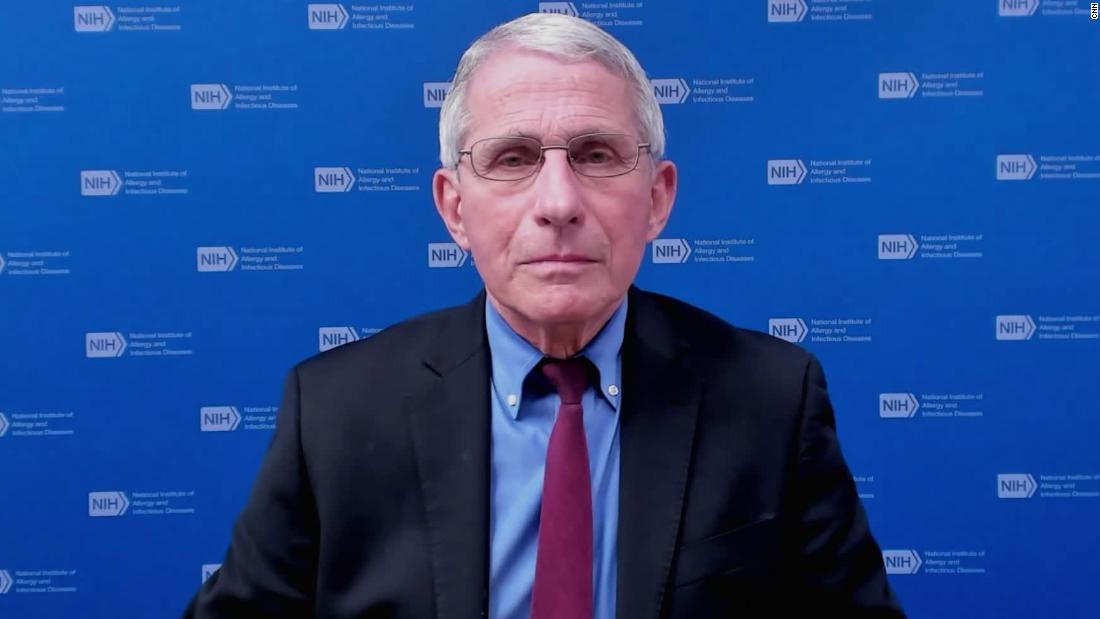 Health experts have identified at least three coronavirus variants in the US that appeared to originate in the UK, South Africa and Brazil. While the average case rate in the US has declined lately, officials are concerned these variants could fuel another surge.

Fauci, the director of the National Institute for Allergy and Infectious Disease, told CNN’s Wolf Blitzer that health experts in South Africa have seen that the variant there has such a high rate of reinfection that previous infection did not appear to protect people.

Ramping up vaccine administration, experts hope, will mitigate the risk of new variants fueling another surge through the US.

Even though current vaccines do not offer the same level of protection against the variants, they can protect against serious disease, including hospitalization and death, Fauci said. They could also keep variants from becoming more dominant.

“Viruses cannot mutate if they don’t replicate. And if you stop their replication by vaccinating widely and not giving the virus an open playing field to continue to respond to the pressures that you put on it, you will not get mutations,” Fauci said in a virtual news briefing with the White House Covid-19 response team.

“You need to get vaccinated when it becomes available as quickly and as expeditiously as possible throughout the country.”

More transmissible variants spread across the US

Experts remain concerned about the spread of the variants.”Right now we are in an absolute race against time with these variants, with trying to get people vaccinated before they spread too much across our country,” said emergency physician Dr. Megan Ranney, director of the Brown-Lifespan Center for Digital Health in Rhode Island. “It means that just going to the grocery store, to school or to work could become more dangerous. We have an already overtaxed and exhausted health care system.”

The variant identified in the UK has already made its way to several US states.

On Monday, Iowa’s Department of Health said three cases were identified. Officials have contacted those infected to monitor their health and notify the people they have been in with whom they’ve been in close contact.

Georgia officials have identified 19 cases in the metro Atlanta area, the Department of Health said Monday. The cases are among people ages 15 to 61.

South Carolina’s first-known case of the variant was identified in an adult from the Lowcountry region who traveled internationally, the agency said in a statement Saturday.

And though Covid-19 cases have been declining steadily in Colorado, the state has identified 13 cases of the UK strain, Colorado’s epidemiologist Dr. Rachel Herlihy told reporters during a Zoom press conference.

The state is “working hard” to make distribution of a vaccine against the virus equitable and transparent, Brigadier Gen. Scott Sherman of Colorado’s National Guard said.

32 million vaccine doses administered in the US

The distribution and administration of vaccines has been sluggish, but officials are hoping to speed up the pace of getting doses to states and into people’s arms to get their arms around the pandemic and the increasing variants.

So far, more than 32 million doses of Covid-19 vaccine have been administered in the United States, with 26 million people receiving at least one dose and nearly 6 million being fully vaccinated, according to data published Monday by the US Centers for Disease Control and Prevention.

Both Michigan and North Carolina have administered more than a million vaccine doses, officials said.

“Reaching this milestone is good news for our families, frontline workers, and small business owners, but there is more work to do,” Michigan Gov. Gretchen Whitmer said. “My administration is working closely with the federal government to help us get the supply we need to reach our goal and return to the normalcy we all crave. I ask for patience from Michiganders as our frontline workers work around the clock to administer vaccines.”

“We have long planned for most Minnesotans to get vaccinated in the places they are used to getting their health care,” Walz said in a press statement. “But not everyone has a doctor or pharmacy they’re familiar with. That’s why we’ve built up a reliable network of different ways Minnesotans will be able to access the vaccine.”

People previously infected with Covid-19 may only need one vaccine dose, study suggests

Those who have already been infected with coronavirus and hope to avoid reinfection may only need one dose of a vaccine instead of the two being administered to most, according to a study posted Monday.

People who were previously infected with the virus tended to have antibody levels that were at or above those of people who had gotten both doses but never been infected as well as more generalized side effects after the first dose, wrote the authors of the study, which has not been peer reviewed.

The authors argue that “changing the policy to give these individuals only one dose of vaccine would not negatively impact on their antibody titers, spare them from unnecessary pain and free up many urgently needed vaccine doses.”

A titer is a measurement of the amount or concentration of the antibodies found in a person’s blood, according to the US National Library of Medicine.

“Ongoing follow-up studies will show whether these early differences in immune responses are maintained over time,” they wrote

The CDC says that people should be vaccinated even if they had Covid-19, since it’s yet unclear how long antibody protection lasts.