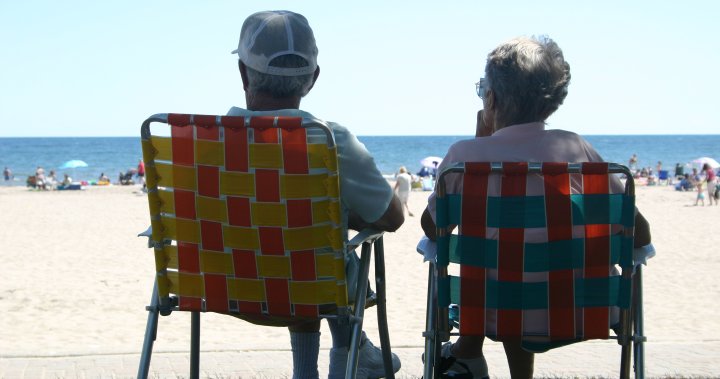 The latest round of pandemic-related restrictions on international travel officially kicked in this morning, requiring all international flights landing in Canada to filter through Calgary, Vancouver, Toronto and Montreal.

But that’s not the only frustration many Canadian travellers are dealing with these days.

A Calgary senior, riding out the winter in Arizona, told Global News her biggest issue with the new restrictions is the imminent mandatory quarantine in a hotel once she lands in Canada.

Marti Young said she won’t do it, especially not at an estimated cost — to her — of upwards of $2,000 for three days.

“It’s ludicrous, it really is,” Young said from her condo in Mesa, Ariz. “If the government wants you to do that, they can pick up the tab.”

Young goes south for the winter every year, and did so again in October 2020 despite travel warnings related to the COVID-19 pandemic.

She has osteoarthritis said she goes south for both her physical health and mental health.

“If I’d had to stay home this winter, I’d have gone into a depression,” she said. “The loneliness, being stuck inside because of COVID(-19), I mean that makes it that much worse.”

Young added she planned to adhere to all of the other health measures the federal government set out, including taking a timely COVID-19 test, getting her vaccines and going straight to her home to isolate.

“We are adults,” she said. “We don’t need someone to babysit us.”

Calgary traveller David Berger-Jones is also frustrated by what he called “ever-changing” rules. He arrived at Calgary International Airport early Thursday morning to board a flight to the United States.

He told Global News it was an emergency and said he hadn’t kept up with the current rules and restrictions.

“I was just unaware of the fact that I had to get a negative test before I came to the airport to get to the (United) States,” Berger-Jones said.

“So I arrived here after getting my ticket last minute — last night — and I was told I cannot fly.”

He added he has no idea what to expect when he arrives back home.

“In probably about six weeks I’ll be returning, and we know a lot can happen in six weeks.”

Federal officials from numerous departments confirm a lot can change.

“As the COVID-19 pandemic continues to rapidly evolve, we have been clear that our response will adapt in lockstep,” a spokesperson for the minister of public safety and emergency preparedness told Global News in a statement.

Mary-Liz Power added “nothing is off the table.”

Global News asked Power if that included imposing further measures at the land border.  Some media reports have said snowbirds driving back will not have to isolate in hotels.

“The details on the testing regime at the land border will be announced soon, so they aren’t in place at this time,” Power stated.

“Our government has been unequivocal since the very beginning of this pandemic that now is not the time to travel.”

Read more:
Confused about the new travel restrictions? Expert breaks it down

Young said it was her choice to go away and she stands by that choice.

“I made the choice to leave because I know what it does for my health when I come here,” she added. “And I know the loneliness I would have had back there.”

As for those who may criticize her for leaving during a pandemic, she said it really isn’t anyone else’s business. She added she covered all of her costs, including getting extra health insurance in case of illness.

“Taxpayers are not picking up any of my costs by coming here,” Young said. “It was my choice, and yes I paid for my choice to come here. I don’t have to pay any more money to come back.”

Young plans to fly back to Calgary in April, at which time she will have had both of her vaccine doses.

She reiterated she plans to go straight from the airport to her home, where she lives alone — not a hotel.

“They can’t force me unless they put me in handcuffs or a straightjacket,” she said. “How are they going to force me? I have not done a crime.”

Don't Miss it UK begins world’s first alternate dosing COVID-19 vaccine trial
Up Next After a fake vaccination drive was used to hunt down Bin Laden, some Pakistanis are wary of COVID-19 vaccine