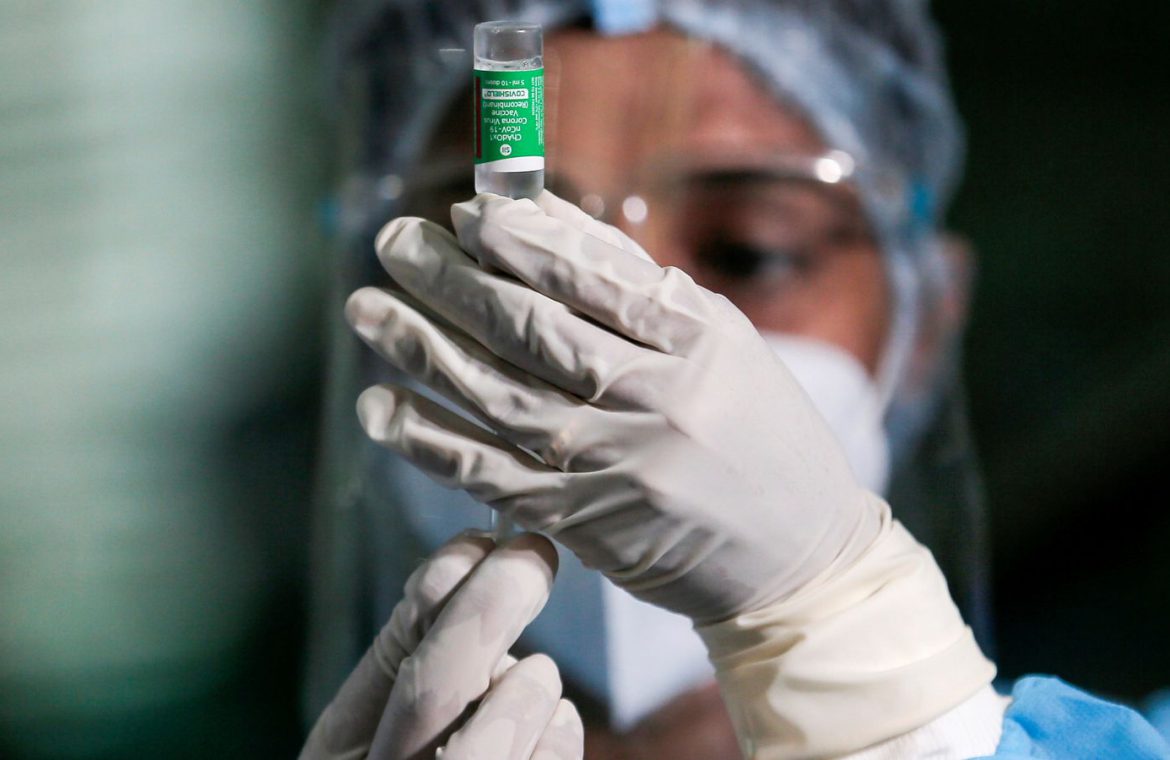 South Africa is suspending its rollout of the Oxford/AstraZeneca coronavirus vaccine after findings suggested it offered limited protection against mild disease caused by the COVID-19 variant discovered there.

It comes as UK vaccines minister Nadhim Zahawi urged the British public to keep faith with the Oxford jab, amid suggestions that a booster against the South Africa variant could come as soon as this autumn.

Image:
A traveller is tested for coronavirus in Lenasia, South Africa

Referring to data that showed the AstraZeneca vaccine reduced mild-to-moderate COVID-19 by just 22% in a trial conducted by the University of the Witwatersrand, South Africa’s health minister Zweli Mkhize said the vaccine would be put on hold.

The country’s government had been intending to give the AstraZeneca jab to healthcare workers, after receiving a million doses produced by the Serum Institute of India last week.

Instead, it will offer those workers alternative vaccines from Pfizer and Johnson & Johnson (J&J) in the coming weeks.

In the meantime, scientists will consider how the AstraZeneca shot can be deployed.

“What does (this) mean for our vaccination programme which we said will start in February? The answer is it will proceed,” Mr Mkhize said in an online briefing.

“From next week, (and) for the next four weeks, we expect that there will be J&J vaccines, there will be Pfizer vaccines. So what will be available to the health workers will be those vaccines.”

He added: “The AstraZeneca vaccine will remain with us, up until the scientists give us clear indications as to what we need to do.”

Mr Mkhize said the variant is currently accounting for more than 90% of coronavirus cases in South Africa.

A testing blitz in England is aiming to find “every single case” of the mutation, after examples were found which appeared to have no links to international travel.

Scientists behind the AstraZeneca jab hope to have a modified version ready by the autumn that will cope with the variant.

Professor Sarah Gilbert told the BBC: “We have a version with the South African spike sequence in the works.”

Speaking to Sky News, health minister Edward Argar stressed that the South Africa variant is not dominant in the UK.

Testing shows that 147 people have been infected with it so far in the UK. This is a small rise since the surge testing began in a number of postcodes last week.

Mr Argar said the “small study” of the Oxford jab in South Africa – of 2,000 people with an average age of 31 – was not yet peer-reviewed but that it was “still important we look at it”.

“It’s important to remember that what South Africa have done is a temporary measure while they look at more information on this,” he said.

He added that there is “no evidence that this vaccine is not effective at preventing hospitalisations, severe illness and death”.

On Sunday, Mr Zahawi said annual vaccines or a “booster in the autumn” for people in the UK could be required to combat the COVID-19 variants.

The vaccines minister told the BBC’s Andrew Marr Show: “I was speaking to (deputy chief medical officer) Jonathan Van-Tam this morning. We see very much probably an annual or booster in the autumn and then an annual (jab), in the way we do with flu vaccinations where you look at what variant of virus is spreading around the world, rapidly produce a variant of vaccine and then begin to vaccinate and protect the nation.”

He urged people not to lose confidence in the efficacy of the AstraZeneca jab in the wake of the South African study.

“While it is right and necessary to prepare for the deployment of an updated vaccine, we can take confidence from the current roll out and the protection it will provide all of us against this terrible disease,” Mr Zahawi wrote in The Daily Telegraph.

“We need to be aware that even where a vaccine has reduced efficacy in preventing infection there may still be good efficacy against severe disease, hospitalisation, and death. This is vitally important for protecting the healthcare system.”

Professor Shabir Madhi, who led trials of the AstraZeneca vaccine in South Africa, told Sky News it was likely the jab would still be used there, stressing that the findings are for mild infection only.

Noting that the technologies used to develop the AstraZeneca and J&J jabs are similar, he said: “The J&J vaccine in South Africa against the variant has been shown to reduce moderate to severe disease by 57%, and severe disease by as much as 89%.

“So I think there might still well be a role for the AZ vaccine, at least in terms of protecting against severe disease.”

Earlier, a spokesman for AstraZeneca said: “Early data has shown limited efficacy against mild disease primarily due to the B.1.351 South African variant.

“We do believe our vaccine could protect against severe disease, as neutralising antibody activity is equivalent to that of other COVID-19 vaccines that have demonstrated activity against more severe disease, particularly when the dosing interval is optimised to 8-12 weeks.”

“It remains highly likely that the vaccine will also protect against severe disease caused by the South African variant.”