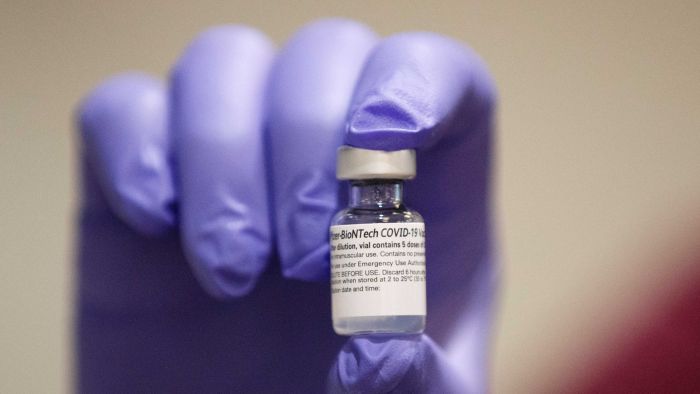 Like the rest of the country, the ACT is set to start the first phase of its COVID-19 vaccination process in the coming weeks.

The first doses of the Pfizer vaccine have arrived in Australia and the nationwide program will begin on February 22.

Locally, Canberra health authorities have been preparing to vaccinate residents in partnership with the Commonwealth.

Here’s what the ACT’s vaccine rollout means for you:

What is the COVID-19 vaccine? The Pfizer vaccine has arrived in Australia.(Pexels: Gustavo Fring)

The Belgium-made Pfizer vaccine arrived on a plane shortly after midday today, after it was approved by the Therapeutic Goods Administration (TGA) in December.

Catch up on the main COVID-19 news from February 15 with our coronavirus blog.

Individuals must receive two jabs of the vaccine, 21 days apart.

Australia has an agreement with Pfizer for it to provide a total of 3 million doses over the months of April, May and June.

The Government is aiming for a target of 80,000 doses per week to start, ramping up to 4 million doses by the end of March.

It also hopes that everyone who wants a vaccine will have been offered one by the end of October 2021.

While priority groups will get the Pfizer vaccine, it is likely most Australians will receive the Oxford-AstraZeneca vaccine, which is expected to be rolled out later in the year once it is approved by the TGA.

“There are many operational and communication challenges that every government in Australia faces in safely providing the vaccine to the entire population in the face of global supply issues.”

Read more about COVID-19 vaccines:How much will it cost?

The vaccine is free for all adults who wish to receive it, Mr Barr said.

Children are yet to be included in the official rollout plan, mainly because it has not been given clinical approval for those aged under 18.

The ACT Government last week committed to matching the Commonwealth’s investment in the vaccine program, putting $20 million towards it in the Budget.

When can I get the COVID-19 vaccine? Chief Minister Andrew Barr said he personally did not expect to get the vaccine until late in the rollout.(ABC News: Niki Burnside)

People in 1A have been identified as:

Phase 1B, expected to begin in March, will target:

adults aged 70 and overother healthcare workersAboriginal and Torres Strait Islander people over 55 yearsadults with an underlying medical condition, including those with a disability, who did not receive a vaccine under phase 1Acritical and high-risk workers including defence, police, fire, emergency services

Phase 2A, slated for mid-year, will expand to the general population:

balance of adult populationcatch up any unvaccinated people from previous phasesHow will I be notified and vaccinated? Frontline healthcare workers are in the vaccine program’s priority group.(ABC News: Penny McLintock)

Individuals allocated to phase 1A should expect to be contacted in the coming days — initially by an email prompting them to call a number to book in their appointment.

That call will establish on what day and at what time they’re to be given the vaccine.

ACT Health Minister Rachel Stephen-Smith said they had undertaken “significant planning to ensure we are well prepared to deliver the vaccine”.

The first vaccines will be administered at the Canberra Hospital’s Surge Centre, with more locations to be established later in the year.

Ms Stephen-Smith said the Garran centre would continue to operate as a testing facility at the same time.

“The centre was specifically custom designed for a COVID-19 environment and constructed with the highest standards of infection prevention and control — it almost operates like two separate facilities,” she said.

Healthcare workers will be vaccinated in a staged approach to ensure teams can continue their work throughout the program, given that a small number of people can suffer minor adverse effects for a few days after receiving the vaccine.

But Canberra Health Services chief executive officer Bernadette McDonald says the ACT will not have a “no jab, no job” policy.

She said those who worked in healthcare and did not want the vaccine would not lose their employment as a result.

“Any staff who refuse to have the vaccine, we will follow up with each staff member and just understand why,” she said.

“Sometimes it’s just misunderstanding, they don’t know all the impacts or the benefits of having vaccine.”

What happens next? So far, no major safety concerns have been reported in either Pfizer or Moderna’s COVID-19 vaccine trials.(Pexels)

Most Canberrans will not be vaccinated until the latter half of 2021.

Those who are young and do not have chronic health conditions will wait the longest, with Australians broken up into five priority groups.

And while the Federal Government has said it hopes to offer the vaccination to everyone by October, much of the detail around its timing is yet to be confirmed.

“It’s a process that is going to take some time,” Mr Barr said.

“The majority of Canberrans won’t be eligible to get vaccinated until the second half of this year at the earliest.”

He urged Canberrans to continue to practice COVID-safe measures as the vaccine was rolled out.

More than 335,000 Canberrans have downloaded the CheckIn CBR app, a major component of the ACT’s COVID-19 response.

“The ACT Government will continue to work with the Commonwealth on the next phases of the program and we will provide regular updates to the community on the rollout process,” Mr Barr said.

“There are many operational and communication challenges that every government in Australia faces in safely providing the vaccine to the entire population in the face of global supply issues.”

Chief Health Officer Kerryn Coleman said the vaccine was like any other.

Some people could expect a little pain at the site of the injection, she said.

“I think it’s really important that people go in expecting that they’re likely to get a little bit of pain and redness in the area,” she said.

“A smaller number of people also have what we call systemic symptoms associated with that — it sometimes feels like you’ve got the flu, you get a bit of a headache, you might feel really heavy in your limbs for a day or two.

“That tells us that the vaccine is working in your body. So we’ll be working really hard to make sure people understand that and expect that.”