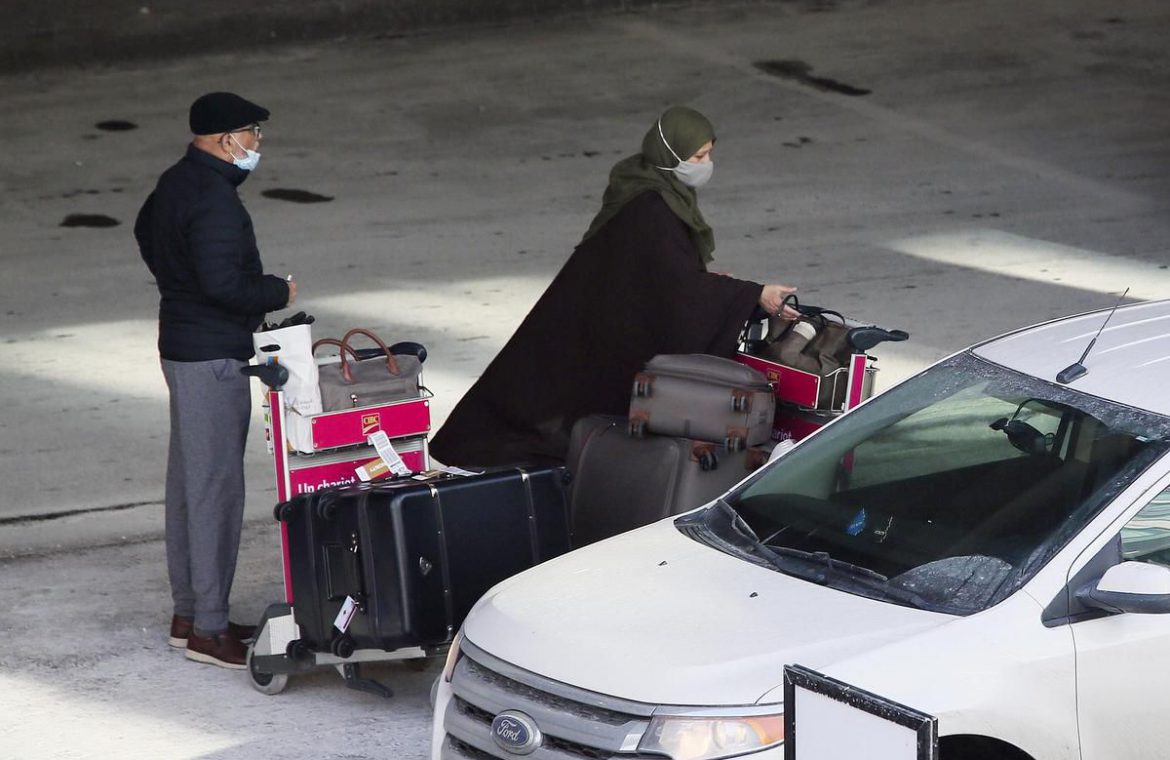 6:06 a.m.: Cases of COVID-19 are increasing in some parts of India after months of a steady nationwide decline, prompting authorities to impose lockdowns and other virus restrictions.

Infections have been plummeting in India since September, and life has already returned to normal in large parts of the country. In many cities, markets are bustling, roads are crowded and restaurants are nearly full.

But experts have been warning that the reasons behind India’s success aren’t really understood, and that the country of nearly 1.4 billion people can’t afford to let its guard down. Public health officials are now investigating potential mutations in the virus that could make it more contagious and render some treatments and vaccines less effective.

The spike has been most pronounced in the western state of Maharashtra, where nearly 7,000 cases were detected in the past 24-hours, accounting for almost half of India’s over 14,000 cases confirmed on Monday. The weekly average for infections has nearly doubled to 5,229 in the state in the past two weeks, and most of the cases have been concentrated in a few areas, including India’s financial capital, Mumbai.

Lockdowns have been reimposed in some parts of the state and authorities have banned all religious or cultural programs. Another wave of cases was “knocking on our door,” state Chief Minister Uddhav Thackeray said in a virtual address Sunday, while warning people that failure to follow public health measures like wearing masks could result in a need for larger and stricter lockdowns.

6:05 .m.: President Joe Biden will mark 500,000 U.S. lives lost from COVID-19 with a moment of silence and candle-lighting ceremony at the White House.

The nation is expected to pass the grim milestone on Monday, just over a year after the first confirmed U.S. fatality of the pandemic.

The White House said Biden will deliver remarks at sunset to honour those who lost their lives. He will be joined by first lady Jill Biden and Vice-President Kamala Harris and her husband, Doug Emhoff. They will participate in the moment of silence and lighting ceremony.

Biden has made a point of recognizing the lives lost from the coronavirus. His first event upon arriving in Washington for his inauguration a month ago was to deliver remarks at a COVID-19 memorial ceremony.

6:04 a.m.: Elementary schools and kindergartens in more than half of Germany’s 16 states reopened Monday after two months of closure due to the coronavirus pandemic.

The move comes despite growing signs that the decline in case numbers in Germany is flattening out again and even rising in some areas.

Germany’s education minister, Anja Karliczek, has defended the decision to reopen schools, saying younger children in particular benefit from learning together in groups.

Karliczek told German news agency dpa that schools should use “all available means to prevent virus transmission” and expressed confidence that state education officials — who are in charge of school matters in Germany — would consider infection numbers when deciding where to reopen.

Germany’s disease control agency say there were 4,369 newly confirmed cases and 62 deaths in the past day, though Monday’s numbers are often low due to reporting delays over the weekend.

Education unions have called for teachers and kindergarten workers to be moved into a higher priority group for vaccinations, an idea that government officials have said they will consider.

6:03 a.m.: British Prime Minister Boris Johnson is laying out a road map for lifting lockdown — but millions of people in the U.K. longing for a haircut or a meal in a restaurant still face a long wait.

Johnson is set to announce a plan Monday to ease restrictions incrementally, starting by reopening schools in England on March 8. People will be allowed to meet one friend or relative for a chat or picnic outdoors from the same day.

Three weeks later, people will be able to meet outdoors in groups of up to six. But restaurants, pubs, gyms and hairdressers are likely to remain closed until at least April.

The government says progress will depend on vaccines proving effective, infection rates remaining low and no new virus variants emerging that throw the plans into disarray.

Britain has had Europe’s deadliest coronavirus outbreak, with more than 120,000 deaths.

Vaccines Minister Nadhim Zahawi said the government’s plan for easing restrictions was “steady as she goes.”

6:03 a.m.: Researchers in Scotland say its COVID-19 vaccination program has led to a sharp drop in hospitalizations.

“These results are very encouraging and have given us great reasons to be optimistic for the future,’’ said Professor Aziz Sheikh, director of the University of Edinburgh’s Usher Institute. “We now have national evidence — across an entire country — that vaccination provides protection against COVID-19 hospitalizations.”

6 a.m.: A mandatory three-day hotel quarantine for most travellers landing at Canadian airports comes into effect today, along with a suite of measures meant to prevent contagious COVID-19 variants from entering the country.

Prime Minister Justin Trudeau has said the tighter border controls are meant to keep everyone safe, not punish travellers.

Anyone flying into the country will be required to foot the bill for their hotel stays.

They will also have to complete multiple COVID-19 tests in the days after they arrive in Canada.

Most incoming travellers will need to get tested for the virus upon arrival and again towards the end of their mandatory 14-day quarantine.

Travellers arriving at land borders will be given self-swab kits, and testing will be provided on-site at five high-volume border crossings.

They’ll need to complete a second test on Day 10 of their self-isolation period.

6 a.m.: Canada is poised to receive a record number of COVID-19 vaccine doses this week thanks to scheduled deliveries from Pfizer-BioNTech and Moderna, as the country looks to speed up its vaccination efforts.

The Public Health Agency of Canada says it expects more than 640,000 shots from the pharmaceutical giants this week, which would represent the largest number of deliveries in a single week.

The previous record was set last week when Pfizer and BioNTech delivered more than 400,000 doses of their vaccine following a month-long lull while they expanded a production plant in Europe.

The two companies will ship more than 475,000 shots this week before scaling back slightly to 445,000 doses per week as they look to fulfil their commitment to deliver 4 million jabs by the end of March.

Canada will also receive 168,000 shots this week from Moderna, which ships its doses every three weeks. Unlike the Pfizer-BioNTech shots, Moderna’s are largely destined for northern and remote communities.

The expected influx of vaccine shots follows news on Friday that the millionth Canadian had received a first dose of either the Pfizer-BioNTech or Moderna vaccine.

5:58 a.m.: One of Ontario’s long-standing COVID-19 hot spots returns to the province’s colour-coded system of pandemic restrictions today, while a stay-at-home order remains in effect for three others.

Businesses in York Region are allowed to reopen as the public health unit returns to the second-most restrictive red level of public health precautions.

Non-essential retailers and restaurants can welcome customers back, with capacity limits and physical distancing in place.

York has long logged some of Ontario’s highest COVID-19 case counts, but the region’s chief medical officer of health requested that the province move it back to the tiered framework to bring it in line with most of Ontario’s other public health units.

The stay-at-home order remains in effect only for Toronto, Peel and North Bay-Parry Sound until at least March 8.

Meanwhile, the province’s chief public health officer is due to testify before a commission investigating how Ontario’s response to COVID-19 affected long-term care homes.

Dr. David Williams’ comments will not be live-streamed, but the Long-Term Care COVID-19 Commission is expected to post a transcript at a later date.

5:58 a.m.: The head of the Canadian Medical Association is urging the federal government to boost access to family doctors for COVID-19 ‘long-haulers’ enduring ongoing illness and requiring referrals to multiple specialists.

Dr. Ann Collins said people struggling with persistent and wide-ranging symptoms and without a primary care provider need a regular physician to manage their care, which will continue long after the pandemic is over.

“There’s no question that there is clear value to having a primary care physician or a primary care team who the patient can always be anchored to, and who can make the necessary referrals,” Collins said from Fredericton, where she has been a family doctor for three decades.

At least 10 per cent of COVID-19 patients are believed to suffer from symptoms months after their diagnosis, according to various studies around the world that have cited brain fog, anxiety and conditions involving multiple organs, such as the heart and lungs.

Collins said there’s a lack of recognition about “long COVID” among health-care providers, likely because some have symptoms similar to chronic fatigue syndrome, leading to further frustration for patients who are stuck in a seemingly never-ending battle with the disease.