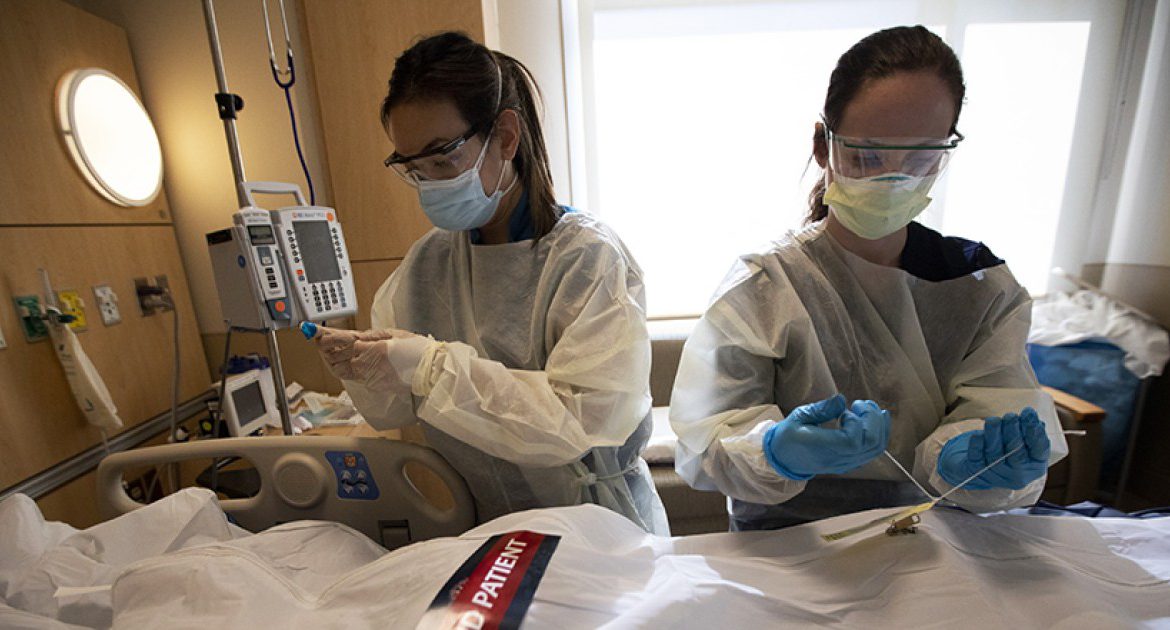 A coronavirus variant that emerged in mid-2020 and surged to become the dominant strain in California not only spreads more readily than its predecessors, but also evades antibodies generated by COVID-19 vaccines or prior infection and it’s associated with severe illness and death, researchers said.

In a study that helps explain the state’s dramatic surge in COVID-19 cases and deaths — and portends further trouble ahead — scientists at UC San Francisco said the cluster of mutations that characterizes the homegrown strain should mark it as a “variant of concern” on par with those from the United Kingdom, South Africa and Brazil.

“The devil is already here,” said Dr. Charles Chiu, who led the UCSF team of geneticists, epidemiologists, statisticians and other scientists in a wide-ranging analysis of the new variant, which they call B.1.427/B.1.429. “I wish it were different. But the science is the science.”

Californians, along with the rest of the country, have been bracing for the rise of a more transmissible coronavirus variant from the U.K. known as B.1.1.7. But they should know that a rival strain that is probably just as worrisome has already settled in, and will probably account for 90% of the state’s infections by the end of next month, said Chiu, an infectious diseases researcher and physician.

The U.K. and California variants are each armed with enhanced capabilities, and the likelihood that they could circulate in the same population raises the specter of a return to spiking infections and deaths, Chiu said. It also opens the door to a “nightmare scenario”: That the two viruses will meet in a single person, swap their mutations, and create an even more dangerous strain of the SARS-CoV-2 virus.

The new evidence that the California variant could make people sicker, and vaccines less effective, should spur more intensive efforts to drive down infections, Chiu said. Those should include both public health measures, such as masking and limits on public activities, and a campaign of rapid vaccinations, he added.

The new analysis is currently under review by the public health departments of San Francisco County and the state, which collaborated in the new research. It is expected to post late this week to MedRxiv, a website that allows new research to be shared before its formal publication.

Over five months starting on Sept. 1, the California strain, which is sometimes referred to as 20C/L452R, rose from complete obscurity to account for more than 50% of all coronavirus samples that were subjected to genetic analysis in the state. Compared with strains that were most prominent here in early fall, the new strain seems to have an enhanced ability to spread, Chiu said.

Exactly how much more transmissible the California strain is remains an open question, he added. But the evidence that it’s more contagious comes from several sources.

Samples collected from a range of counties, and using a variety of collection methods, suggest the variant is 19% to 24% more transmissible. But in some circumstances, its advantage was much greater: In one nursing home outbreak, B.1.427/B.1.429 spread at a rate that was six times higher than its predecessors.

Researchers also discerned uniform patterns of the variant’s expansion in counties across the state. When infection rates rose, they typically did so in tandem with growing evidence of the California strain’s presence.

The variant’s enhanced propensity for spread was also evident in laboratory results. An analysis of viral samples from around the state showed that compared with people infected with other strains of SARS-CoV-2, those who were infected with the California strain had viral loads in the nasopharynx that were twice as high.

That, in turn, made it highly likely that each person infected with the new strain would go on to infect more people.

B.1.427/B.1.429’s genome includes three mutations that affect the crucial spike protein, which the virus uses to sneak into human cells and convert them into factories for its own production. One of those three mutations, dubbed L452R, affects the so-called receptor binding domain, helping the virus attach more firmly to target cells.

That adaptation has not been seen in coronavirus variants that have caused worry elsewhere.

In a UCSF lab, scientists found that the L452R mutation alone made the California strain more damaging as well. A coronavirus engineered to have only that mutation was able to infect human lung tissue at least 40% more readily than were circulating variants that lacked the mutation. Compared with those so-called wild-type strains, the engineered virus was more than three times more infectious.

In the lab, the California strain also revealed itself to be more resistant to neutralizing antibodies generated in response to COVID-19 vaccines as well as by a previous coronavirus infection.

Compared with existing variants, the reduction in protection was “moderate … but significant,” the researchers said.

“I do anticipate over time it is going to have an effect on vaccination,” Chiu said. Though the magnitude of the effect varied from sample to sample and was less pronounced than with the South Africa strain, “it still is concerning,” he said.

Ominously, the new study also suggested the California variant could have greater virulence.

That observation is based on the medical charts of 324 patients hospitalized at UCSF, a relatively small sample. Still, the researchers found that the 21% of these patients who were infected with B.1.427/B.1.429 were more likely than their counterparts to have been admitted to the ICU, and they were 11 times more likely to die. That finding held up even after researchers adjusted for differences in the patients’ age, gender and ethnicity.

Chiu cautions, however, that this increased risk of death may not be a sign that the variant is inherently more lethal. Rather, it might simply be a reflection that its greater transmissibility caused hospitals to become so overwhelmed and healthcare resources to be stretched so thin that more deaths were the result — especially in Southern California.

Dr. Marc Suchard, an expert on infectious disease tracking at UCLA, said that some of the team’s findings would probably be refined as more virus samples were genetically sequenced and more data came to light.

“It remains critically important that we actively sequence the virus as cases are diagnosed in our state,” said Suchard, who was not involved in the UCSF work. “I am glad to see such a collaboration between academics and public health departments in California to identify the emergence of a previously unidentified lineage.”

Don't Miss it Coronavirus: Fauci says U.S. has done ‘worst than most any other country’
Up Next COVID lockdown exit strategies | COVID-19 Special