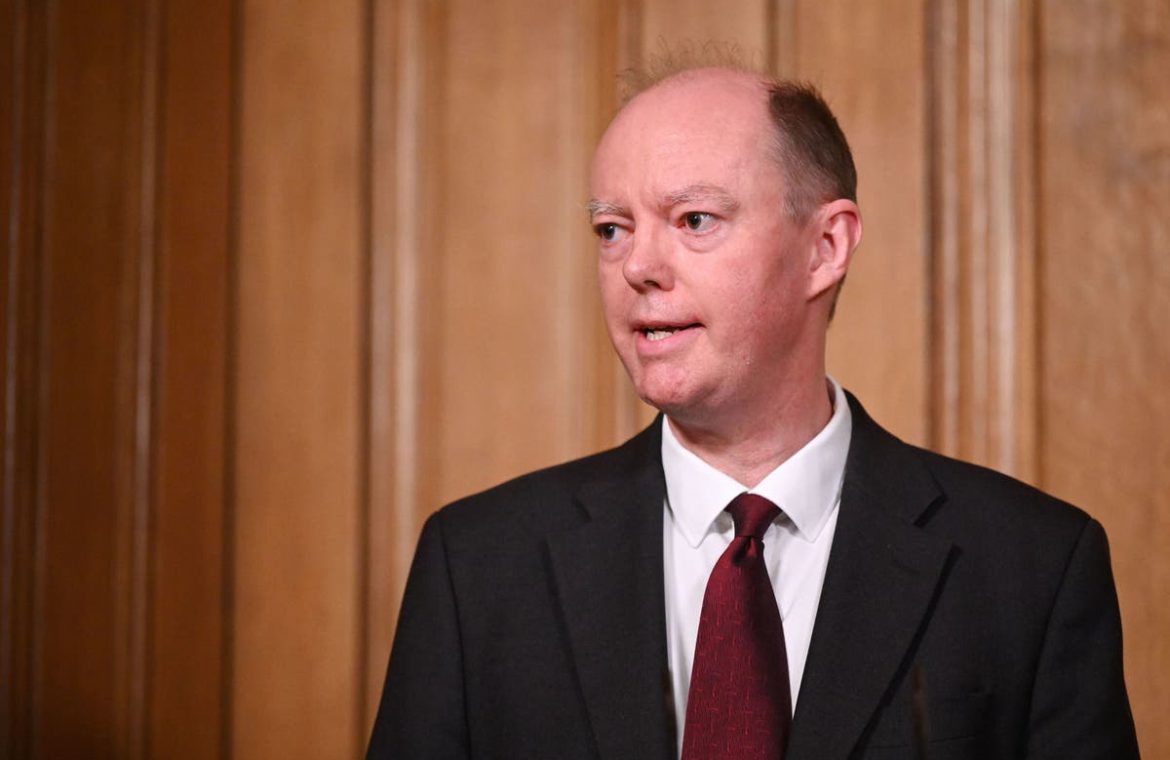 rofessor Chris Whitty told MPs the situation could “turn bad” very quickly if the easing of lockdown restrictions are rushed and a close eye is not kept on it.

Appearing at the Science and Technology Committee he said: “I think a lot of people may think that this is all over.

“I would encourage them to look at what is happening in continental Europe at the moment where a lot of countries are going back into rates going up and having to close things down again having not been in that situation before. I think it’s very easy to forget quite how quickly things can turn bad if you don’t keep a very very close eye on it.”

It comes as the number of daily Covid deaths and cases in the UK has dropped to the lowest levels in five months.

On Monday, the Government reported a further 65 people had died within 28 days of testing positive for the coronavirus, bringing the UK total to 124,566. That is the lowest total since 60 on October 4. Some 4,712 new infections were also reported, the lowest daily figure since September 28.

Public Health Wales said a total of 1,007,391 first doses of the Covid-19 vaccine had now been given in Wales, an increase of 9,095 from the previous day.

There have been a further 166 cases of coronavirus in Wales, taking the total number of confirmed cases to 205,368.

Public Health Wales reported three further deaths, taking the total in the country since the start of the pandemic to 5,406.

“Our focus needs to be on reducing the levels we have here. That is the key point, to keep things under control,” he said.

“As levels come down test, trace and isolate becomes increasingly important, cluster identification – making sure we understand where there are outbreaks and how to deal with them – and of course the vaccine is going to make a huge difference to all of this.

“I do not think that zero Covid is possible. I think there’s nothing to suggest that this virus will go away, at least any time soon.

“It’s going to be there, circulating. It may be a winter virus that comes back over winters with increasing infection rates during that period”.

It would be very difficult for anywhere to keep cases out in the long-term “because at some point countries have to open up borders”.

“Largely they have been detected in countries which have got good sequencing capabilities, so there will definitely be other variants that simply haven’t been detected because they will be in other countries that aren’t sequencing,” he said.

“I would expect to see more variants emerge”.

The process of “convergent evolution” meant similar variants were arising separately in different parts of the world.

“This is something that means we will see those being acquired in this country and is again a reason to keep rates down as low as possible,” he said.

“That’s where I think we should focus our attention”.

1615291257Digital healthcare to play a ‘big part in the future of the health service’, says NHS chief

Digital healthcare is going to play a big part in the future of the health service, the chief executive of NHS England has said.

Giving evidence to the Commons Health and Social Care Committee on the health and social care white paper, Sir Simon Stevens said the “fuel in the tank” to bring about more modern forms of healthcare is going to be driven by patients and clinicians.

“Digital medicine and digital health is obviously going to be a bigger part of what healthcare looks like in the future,” he said.

NHS England’s chief executive praised the scores of volunteers he described as the “force multipliers” that have helped the NHS with the vaccination programme.

“If you’ve been to your local vaccination services or centres, you will have seen that as well as the brilliant work that GPs and nurses and other NHS staff are doing, the force multiplier are the volunteers,” he told the Health and Social Care Committee on the health and social care white paper.

“This is a huge community mobilisation across the country and that speaks to the fact that part of the success with uptake here is that this is not just a medical exercise, this is also reaching in communities with community leaders and engaging people”.

Professor Chris Whitty suggested the measures pencilled in for May 17, when indoor mixing of up to six people could be allowed, involved “significant risks”.

He told MPs he would “strongly advise” against any attempt to “concertina” the five-week interval between steps.

The April 12 measures are “a very big block”, with shops and outdoor hospitality due to open.

And May 17 “is a very significant block with a lot of stuff that is indoors for the first time, that is the point when we are really going to start to see some very significant risks accumulating, potentially”.

England’s chief medical officer Professor Chris Whitty defended the approach of allowing five-week time intervals between steps of unlocking in order to assess their impact on the virus – saying leaders in all countries had eased off too quickly in the past.

“It’s full of leaders who wished they had acted quicker and then been more careful as they take things off”.

Deaths involving Covid-19 among people aged 80 and over have fallen by 79 per cent since the second-wave peak, the latest ONS figures show.

People aged 80 and over were the second group on the priority list for Covid-19 vaccines, with doses being offered from early December.

Asked whether “data, not dates” was just a slogan, Sir Patrick Vallance told the Science and Technology Committee “for us it is not”.

He told MPs: “For us it’s very important that you measure what you’ve done and we don’t know what the impact of, for example schools going back, is going to be.

“And so there’s an estimate from the modelling group that it could have an effect on R, between 10% and 15% increase. We don’t know within that range exactly what it would be”.

The Government’s chief scientific adviser added: “Nobody would say that we know exactly how this is going to roll out over the next few months.

“And the important thing is to measure, adapt and take decisions in the light of information as it emerges”.